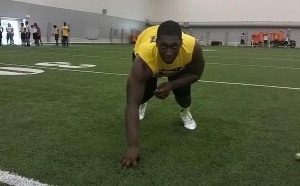 With offers on the horizon, and the scholarship count on the verge increasing, Charly Timite is one of many well-known names on the Blue-Grey All-American Bowl Watch List, thanks in part to his participation at the brand’s Regional Combine.

Given the fact we’ve traveled all over the country this year to scout prospects in the Class of 2016 with our NFL veteran coaching staff, at NFL facilities from coast to coast mind you, we figured it was time to unveil the Blue-Grey All-American Bowl Watch List.

Most of the names you’ll find either attended the brand’s Regional Combine or Super Combine. Other individuals received an invite to one of the workouts, but unfortunately for whatever the reason, we’re unable to attend due to an injury or another prior commitment.

As most know, there are a pair of upcoming Blue-Grey All-American Bowls. The first one is East vs. West on Dec. 20 at Dallas Cowboys’ AT&T Stadium. The second encounter is North vs. South on Jan. 9 at Tampa Bay Buccaneers’ Raymond James Stadium. Both big games will be broadcast on Fox Sports and the Impact Football Network.

In the meantime, prospects will soon be added to the Blue-Grey All-American Bowl Watch List and those individuals are among the nation’s many recruits being considered for a possible invite. Official announcements on some, but not all, the participants will be made in the next couple of months.

Editor’s note: Our team of scouts has done plenty of research and the list of upperclassmen recruits continues to grow. Moving forward, we’ll have a pair of stories on the athletes who recently made the Blue-Grey All-American Bowl Watch List. Follow this link for insight on the offensive side of the ball.

Madre Harper, Arlington Lamar (TX): An Oklahoma State commit, the 6-foot-3 and 170-pounder has no problem rising to the occasion.

Charles Oliver, Fairfield (TX): A Texas A&M commit, there’s not much that the 6-2 and 185-pounder can’t do out on the gridiron.

Dorian Banks, Gallatin (TN): A one-time Tennessee commit, the 5-9 and 165-pounder is seemingly without peer in the secondary.

Devin Studstill, Palm Beach Gardens (FL): Notre Dame and Miami, among others, are interested in the 6-1 and 180-pounder.

Trey Udoffia, Del Oro (CA): A Colorado commit, the 6-1 and 175-pounder has become a hot topic of conversation in recruiting circles.

Jordan Mack, Wesleyan School (GA): A Virginia commit, the 6-2 and 182-pounder as an intimidating presence in the secondary.

Josh Hayes, Pike (IN): A Purdue commit, the 6-foot, 180-pounder can be left out on what most people call an island and he’ll be fine.

Tyrece Speaight, Upper Arlington (OH): A Toledo commit, the 5-10 and 167-pounder, at times, can shutdown one side of the field.

Hirkley Latu, Kahuku (HI): A BYU commit, the 6-3 and 200-pounder handles things on the outside and delivers big hits in the middle.

Bricen Garner, Central Catholic (PA): A Pitt commit, the 6-1 and 165-pounder is as serious as they come when the ball is in play.

Seth Currens, Pickering Central (OH): A Wisconsin commit, the 6-2 and 195-pounder is a force to be reckon with in the secondary.

Craig Watts, Admiral Farragut Academy (FL): The 6-foot and 180-pounder is about as high-profile a national prospect as there is.

Londyn Craft, IMG Academy (FL): The 6-1 and 185-pounder plays for one of the nation’s top prep programs and figures to do well.

Val Mayes, Miami Norland (FL): The 6-1 and 170-pounder was once a relative unknown on the recruiting scene. Those days are done.

Daniel Pruett, Chapman (SC): Clemson and South Carolina are two teams who have expressed interest in the 5-11 and 170-pounder.

Bacarri Austell, Wekiva (FL): Programs from all over the East Coast are sleeping on the 6-foot and 180-pounder. It’s time to wake up.

Jasper Fuller, Clinton (SC): The 5-10 and 170-pounder has talked with Clemson and Georgia Tech. That’s a sign of good things to come.

Daymon Murray, Lakewood Ranch (FL): Blanket receivers, cover backs, take on tight ends, the 6-3 and 200-pounder can do it all.

Eric Brewington, Manor (TX): The 5-11 and 170-pounder is getting looks from teams in the American Athletic Conference, mostly Tulsa.

Hunter Allen, Cathedral Catholic (CA): Programs in the Pac-12 Conference seem to have their sights set on the 5-11 and 175-pounder.

Raye Wilson, Junction City (KS): The 5-11 and 180-pounder has seen his stock rise in the eyes of the powers that be in recent weeks.

Tashun Harrison, East Orange Campus (NJ): The 6-foot and 165-pounder has recently seen his stock increase out on the East Coast.

Donnell Alexander, Cass Technical (MI): With interest from schools in the MAC, the 5-9 and 160-pounder is destined for success.

MiCario Stanley, Cape Coral (FL): A South Florida commit, the 6-2 and 230-pounder does not mess around when the ball is snapped.

Vosean Joseph, Norland (FL): A Florida commit, the 6-1 and 210-pounder has been known in the past to be a one-man wrecking crew.

Tim Walton, Cass Technical (MI): An Illinois commit, also with NFL bloodlines, the 6-2 and 225-pounder is destined for success.

DeLonte Berry, Jefferson (WV): A Navy commit, the 6-2 and 212-pounder figures to end up a starter for the game in the Sunshine State.

Vada King, Smiths Station (AL): A Southern Miss commit, with a motor that simply doesn’t stop, 6-1 and 230-pounder is a unique talent.

David Reese, Farmington (MI): A Michigan commit, the 6-1 and 235-pounder plans to stay close to home and play his college ball.

Alec Simpson, Palisades (CA): A Nevada commit, the 6-3 and 205-pounder has plenty of interest despite his pledge to the Wolfpack.

Jeremiah Pritchard, Silverado (NV): Colorado, Hawaii and UNLV have offered the 6-foot and 200-pounder. Washington could be next.

Landon Holden, Chapman (SC): The 6-1 and 208-pounder makes plays all over the field. Schools in the ACC have noticed him lately.

Toron Morten, Central (AL): Alcorn State was the first to offer the 6-1 and 227-pounder. Auburn is just now starting to come around.

Alex Hunter, Liberty (AZ): UCLA recently reached out to the 6-2 and 205-pounder. Arizona and Arizona State now have competition.

Brett Bloodworth, Mansfield Legacy (TX): No one is beating down his door. At least, not now. The 6-2 and 190-pounder is patient.

James Brown, Lafayette (LA): The 6-2 and and 225-pounder continues to improve and his college options have also increased.

Kendall Blakely, Basic (NV): Up for any challenge, a trait teams from the ACC appreciate, the 6-1 and 250-pounder is a natural.

Rudolph Singleton, Village Christian Academy (NC): The 6-1 and 205-pounder plays on both sides. Defense could be his calling.

Jamarian Caston, Archbishop Riordan (CA): The 6-0 and 225-pounder is on the radar of Baylor, TCU and Texas, among other schools.

Reese Donahue, Cabell Midland (WV): A West Virginia commit, the 6-4 and 250-pounder means business once he steps on the field.

Kordell Looney, Springfield (OH): A Kentucky commit, the 6-4 and 285-pounder often makes his living in the opponents backfield.

Demerick Gary, Kimball (TX): An SMU commit, the 6-3 and 250-pounder is difficult to stop once he puts his mind on something.

Patrick Jones, Arlington Heights (TX): Another SMU commit, the 6-1 and 175-pounder is nothing nice from his spot in the middle.

Allen Cater, Mount Paran Christian (GA): An Indiana commit, the 6-5 and 245-pounder is usually at his best coming off the edge.

Edrick Mathews, Cass Technical (MI): A Toledo commit, the 6-4 and 270-pounder typically has little or no trouble against peers.

Charly Timite, Simon Gratz (PA): The 6-3 and 256-pounder is on the Penn State radar and eager to prove he’s the best in the business.

Michael Perry, Whitehaven (TN): With no shortage of options, the 6-2 and 325-pounder has offers from Tennessee and Ole Miss.

Tymir Oliver, West Catholic (PA): The 6-3 and 258-pounder creates problems when he lines up at his customary spot on the outside.

Lorenzo Neal, St. Thomas (TX): You name the conference and at least one school from it has talked to the 6-2 and 300-pounder.

Claudio Martin, Rockhurst (MO): The 6-3 and 250-pounder is on the apparently on the short list of Indiana, Iowa State and Kansas.

Nick Gregg, Reed (NV): A Nevada commit, the 6-2 and 285-pounder is not afraid of contact. In fact, he often welcomes the physical play.

Connor Murphy, Brophy Prep (AZ): The 6-7 and 250-pounder has offers from powerhouses such as Michigan, Wisconsin and USC.

Massen Newton, Lake Oswego (OR): Low to the ground with superior quickness, the 5-10 and 265-pounder causes plenty of problems.

Timothy Horne, Anson (NC): Programs from the SEC have kept tabs on the 6-4 and 269-pounder. That won’t change anytime soon.

Ryan Becker, Marble Falls (TX): The 6-5 and 225-pounder first landed a scholarship to UTSA. Kansas and Arkansas are now in the mix.

Kobi Smith-Parott, Lincoln (NE): South Dakota State was one the first to contact the 6-4 and 335-pounder. Nebraska could be a player. 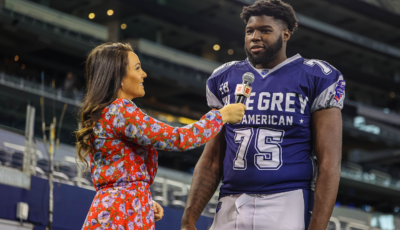 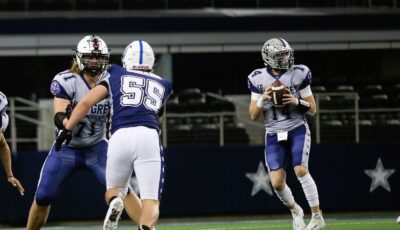