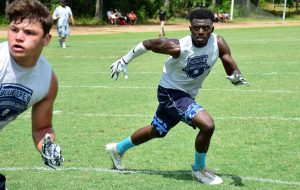 Sun Belt Conference target Xavier Lanier was one of many recognizable names at the Blue-Grey All-American Combine outside of Montgomery (AL). (Photo courtesy of Clark Sports Media)

For the second time in as many years, after being marked on the calendar for a while, the Blue-Grey All-American Combine (Alabama Regional) made a stop in SEC country.

For the first time, however, NFL veteran and Crimson Tide alum Mark McMillian was in attendance at the workout. Same thing can be said about many of his peers, in fact.

Similar to past protocol, what follows is a closer look at the individuals who left a lasting impression on the staff of one-time professionals, including Ty Reynolds, among others.

Also included is some much-needed insight from McMillian on the prospects on hand during the afternoon session. So, without further delay, let’s go ahead and get started.

Brayden Hawkins, QB, Myers Park (NC): The 6-3 and 215-pound junior was on the roster, but unable to attend. Still, he remains on the radar. “I’ve heard about Hawkins before and look forward to seeing him in action soon,” McMillian said.

Kasen Andrews, QB, Calvary Christian (GA): With his frame, the 6-4 and 204-pound junior looked the part and played the part. “Andrews threw the ball really well and made some tough completions at the combine,” McMillian said.

Everett Williams, RB, Lexington (AL): The 6-1 and 220-pound junior was difficult to deal with, his size played a major role. “Williams turned in one of toughest performances of the day and could play for me anytime,” McMillian said.

Kingston Lister, RB, Dabeville (AL): Undersized by many standards, unfairly or not, the 5-6 and 211-pound junior had a chip on his shoulder. “Lister turned heads in one-on-ones with good routes and made guys miss,” McMillian said.

Lloyd Gould, RB, Creekside Christian (GA): The 5-8 and 185-pound junior did a little bit of everything and most of it well. “Gould tested out in the top percentage of players at his position. He’s a good at what he does,” McMillian said.

Bryce Andrews, WR, Calvary Christian (GA): A big target, particularly in the red zone, the 6-4 and 200-pound junior made plays. “Andrews was one of the more polished wide receivers that I’ve watched this season,” McMillian said.

Tray Pettway, WR, Prattville (AL): The 6-3 and 180-pound junior was a relative unknown on the recruiting scene. That’s about to change. “Pettway has size and length, college coaches are looking for that. The offers are coming,” McMillian said.

Xavier Lanier, DB, Gordo (AL): Eastern Kentucky and Troy are interested in the 6-1 and 192-pound junior. Auburn could emerge, too. “Lanier had a breakout effort, with the fastest time of the day in the 40-yard dash at 4.35,” McMillian said.

Ladre Tabb, DB, Pelham (AL): The 5-10 and 165-pound junior was up for any, and all, of the challenges put in front of him. “Tabb will be getting some calls from colleges very soon. I can win with players like him on my side,” McMillian said.

Hunter Sims, DB, Oak Grove (AL): Determined and tough, the 5-11 and 155-pound junior was eager to learn here. “I had a blast coaching Sims. He was consistent at the start, then got better and better. Nothing wrong with that, McMillian said.

Fernando Bryant, DB, Creekside Christian (GA): The 5-8 and 160-pound sophomore is the son of a Super Bowl champ and Alabama alum. “Bryant has a high celing. Also, you can’t teach heart and he’s got plenty of that,” McMillian said.

Tai’Shawn Peagler, DB, Luverne (AL): With the desirable measurements for the next level, the 6-2 and 187-pound junior is on the right track. “Peagler picked up a few techniques on the fly and then he shutdown the receivers,” McMillian said.

Roger Kirby, LB, Valley Head (AL): Capable of lining up at second level, or along the line, the 6-3 and 225-pound junior was versatile. “Kirby is big body who likes to get after it, there’s nothing wrong with that, if you ask me,” McMillian said.

Connor Williams, OL, Winston County (AL): The 6-5 and 337-pound junior opened up eyes with his sheer physical presence alone. “Williams is a load, no arguing that. Once his hands are on you, the play is over,” McMillian said.

Landon Upton, OL, Danville (AL): A good effort was delivered by the 6-3 and 230-pound sophomore, also Cannon Alexander from Hubbertville (AL). “Upton battled in the trenches with the big boys and never gave up, McMillian said.

Malcolm Davis, DL, Sidney Lanier (AL): The 6-2 and 260-pound junior already has offers on the table and the bandwagon is filling up fast. “Davis’ stock is rising, he’s a talent and interest should keep coming in,” McMillian said.

Jaren Fields, DL, Prattville (AL): With interest from the Sun Belt Conference, it’s only a matter of time before the 6-1 and 230-pound junior lands an offer. “Fields is about to blow up on the recruiting scene, just watch,” McMillian said.

Dylan Thomas, DL, Clarke Prep (AL): On paper, signs pointed to the 6-1 and 210-pound sophomore being a bit inexperienced. On the field, it was a different story. “Sky’s the limit, Thomas has potential to play at the next level,” McMillian said.