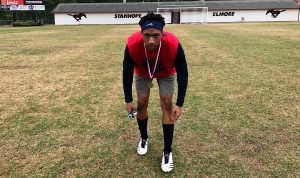 Sun Belt Conference target Andru Ransaw was among the prospects in attendance at the Blue-Grey All-American Combine (Alabama Regional).

For the second time in as many years, NFL veteran Mark McMillian made a return to his old stomping grounds at the Blue-Grey All-American Combine (Alabama Regional).

This time around, Crimson Tide alum McMillian was joined by one-time teammates John Copeland and Antonio Langham, among other fan favorites from Tuscaloosa.

Similar to past protocol, what follows is a closer look at a few of the many individuals who were able to turn heads during the workout. So, without further delay, let’s get started.

Malik Smith, WR, Prattville (AL): The 6-foot and 170-pound junior nearly stole the show. His future is bright, no question about it and you might’ve heard it here first.

DeAndre Olds, WR, Shades Valley (AL): With a good frame, the 6-2 and 190-pound sophomore caused problems for opponents in the secondary from start to finish.

Russell Weeks, TE, New Brockton (AL): There’s plenty to like about the 6-3 and 215-pound sophomore, and with continued improvement, sky could be the limit for him.

Andru Ransaw, DB, Clay Chalkville (AL): South Alabama is among the programs who remain in contact with the 6-1 and 170-pound junior and others figure to follow suit.

Kareem Spruill, DB, Pickens County (AL): Intense, and never one to back down from a challenge, the 5-11 and 165-pound junior was on the winning end of several exchanges.

Reginald McAdams, LB, Shades Valley (AL): Young, and what some might consider inexperienced, the 5-10 and 200-pound sophomore played with the poise of an upperclassman.

Derrick  Butler, LB, Stanhope Elmore (AL): The 6-1 and 235-pound junior is heading in the right direction. The path to success is clear. Now, it’s time to stay on the right track.

Mason Taylor, LB, Prattville (AL): With a motor that did not stop, the 5-10 and 205-pound sophomore had one gear, full-speed ahead. No one was going to slow him down.

Chasen Earnhart, OL, Lee Scott Academy (AL): More than just a big body, the 6-4 and 312-pound junior showed surprising athleticism. His name is one to remember.

Matt Whitman, OL, Stanhope Elmore (AL): With no shortage of competition to be found in this particular setting, the 6-3 and 265-pound junior rose to the occasion.

Connor Higbe, OL, Macon East (AL): The 6-3 and 280-pound junior held his own, and then some. The same thing can be said about Nick Canfield from Rogers (AL).

Taylor Henderson, DL, Morgan Academy (AL): A tireless worker, the 6-2 and 260-pound junior hustled all over, regardless of whether it was skills testing or one-on-ones.

Tristen Holcomb, DL, Sardis (AL): The 6-2 and 240-pound junior earned the respect of his peers, and in the process, opened up the eyes of the coaching staff on hand.

Alex Howard, DL, Etowah (AL): Eager to prove that he belonged, the 6-2 and 230-pound junior did just that, along with Ladorian Leonard from Stanhope Elmore (AL).