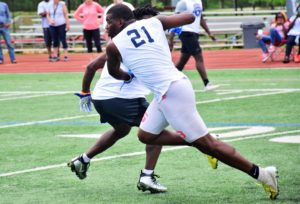 Conference USA target Tyquan Rawls was among the many participants at the Blue-Grey All-American Combine (Atlanta Regional). Photo courtesy of Clark Sports Media.

Year in and year out, there’s little or dispute, the collection of talent at the Blue-Grey All-American Combine (Atlanta Regional) is about as good as it gets on the national level.

What follows in this particular space, similar to many times in the not so distant past, are a few of the many highlights from the workout. That said, without further ado, here we go.

Tucker Kirk, QB, Lumpkin County (GA): The 6-3 and 205-pound junior opened up plenty of eyes. No real surprise to learn that Alabama-Birmingham and Georgia Southern are interested.

Dexter Williams, QB, Mount de Sales Academy (GA): With plans for another workout, Samford, Central Florida and Kansas are in the mix for the 6-1 and 195-pound junior.

Trey Goodman, QB, Lakeside (GA): When all is said and done, as an upperclassman, the 5-11 and 165-pound sophomore might turn out to be the best of the entire bunch.

Jimmy Inman, QB, New Manchester (GA): The 6-4 and 180-pound sophomore possesses a fair amount of upside. Georgia State appears to agree and has talked with him.

Tre Peterson, RB, Columbus (GA): Schools from the Ivy League were first to jump on bandwagon of the 5-9 and 180-pound junior. Auburn since emerged as a potential player.

Iverson Harris, RB, North Cobb (GA): Fast and quick, shifty and elusive, the 5-8 and 170-pound junior did a little bit of everything in the environment. Most of it extremely well.

Leo Blackburn, WR, Westlake (GA): The 6-5 and 210-pound sophomore has plenty of upside and could have multiple scholarships in place by this time next year.

Jaleel Johnson, WR, Wetumpka (AL): Along the sideline, over the middle, down the field, the 6-1 and 180-pound junior could not be contained. Most times, anyway.

Darnell Stephens, WR, Rockdale County (GA): Absent along with brother Darren, the 6-foot and 165-pound junior was in contact with North Carolina State and Southern Illinois.

Wesley Horton, OL, North Atlanta (GA): A man among boys, seemingly more often than not, the 6-4 and 265-pound junior has double-digits scholarship offers in place.

Derek Gibson, OL, Heritage (GA): The 6-2 and 265-pound had good understanding of what was expected. The coaching staff, naturally, had some rave reviews for him.

Devin DeLaine, DB, Woodland Stockbridge (GA): Eastern Kentucky and Tennessee State are on the radar of the 6-foot and 195-pound junior. Watch out for Mississippi State.

Landon Spooner, DB, Loganville (GA): The 6-1 and 190-pound junior appears to be a target of teams in the Big South Conference. As a result, the situation is worth monitoring.

Tyquan Rawls, DB, Wetumpka (AL): The 5-11 and 195-pound junior was in a class all his own. He has five offers too, with Samford, Troy and Alabama-Birmingham in the mix.

Damarcus Davis, DB, Randolph County (AL): Alabama-Birmingham could be a potential landing spot for the 5-9 and 185-pound junior. In the meantime, he’ll keep his options open.

Khaleed Mobley, LB, Roswell (GA): Appalachian State, Arkansas State and South Alabama are taking a long look at the 6-foot and 200-pound junior. Rightfully so given his effort.

Jet Harris, LB, Dobyns Bennett (TN): The 6-1 and 208-pound junior was on campus at East Tennessee State and Liberty. An offer could materialize sooner rather than later.

Ethan Bozarth, LB, White Plains (AL): The 6-2 and 200-pound junior passed the eye test. And then some. Then, he went out and made plays all over the field, sideline-to-sideline.

Joseph Carter, LB, University Christian (FL): The 6-1 and 215-pound sophomore grabbed attention early and kept it throughout, along with Hayden Wells from Lowndes (GA).

Kyle Perry, DL, Hampton (GA): The 6-4 and 245-pound junior couldn’t be stopped down in the trenches, not at all. Kentucky and Memphis are fans of his, apparently.

Davin Vann, DL, Cary (NC): The 6-2 and 260-pound junior has multiple offers and programs are coming on strong from Conference USA and American Athletic Conference.