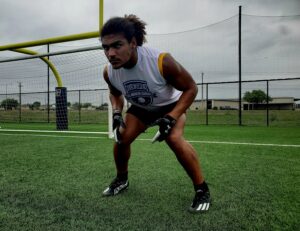 Big 12 Conference target Makai Williams was among the prospects in attendance at the Blue-Grey All-American Combine (Central Texas Regional).

Expectations were reasonably high for the Blue-Grey All-American Combine (Central Texas Regional), and as expected given the favorable past results, the participants delivered on the advanced billing.

NFL veteran Ken Stills was, once again, the lead instructor. NFL veteran trainers Reggie Young and Gerard Lewis were his assistants. Truth be told, it was one of the more well-rounded staffs in recent memory.

Mason Shorb, QB, 2023, Rouse (TX): The 6-foot-3 and 175-pounder and UTSA commit was expected to be one of the marquee names on hand. He certainly lived up to the hype. And then some.

Jake Iloka, RB, 2023, Pflugerville (TX): Texas Southern was one of the first to express interest in the 5-8 and 175-pounder. Now, it appears as if Washington State is on the bandwagon.

Jalon Banks, RB, 2023, Hutto (TX): The 5-10 and 170-pounder has kept the lines of communication open with the likes of Air Force and Navy, among a handful of other programs.

Aidan Rios, RB, 2023, Marion (TX): The 5-11 and 170-pounder has been on campus at a couple different schools from the Ivy League. Things are about to get more interesting, too.

Ezekiel Jones, RB, 2024, Brady (TX): Regardless of class distinction, the 6-foot and 170-pounder could turn out to be one of the best of the bunch. Keep an eye on him.

John Raybuck, RB, 2024, Pflugerville (TX): In terms of potential, the 6-1 and 205-pounder possesses plenty of it. Sky’s the limit. He’s destined to play at the next level.

Tyson Hancock, WR, 2023, Smithville (TX): The 5-10 and 175-pounder has been contact with teams from the Mountain West Conference, namely Colorado State.

Tate Beeles, WR, 2023, Frenship (TX): The 6-6 and 180-pounder opened up eyes, along with Xayvion Noland from Canyon (TX) and Jackson Hancock from Smithville (TX).

Devin Scura, TE, 2023, Manor (TX): Sam Houston State saw something it liked in the 6-5 and 245-pounder talked. Others figure to follow suit, make no mistake about it.

Kenny Atunrase, TE, 2024, Cole (TX): The 6-3 and 215-pounder turned heads. Tyler Bonkowski from Thrall (TX) and Kade Kubeck from Industrial (TX) were in the same category.

Aden Burrell, DB, 2023, Liberty Hill (TX): The 5-11 and 182-pounder could find a home in the Ohio Valley Conference and Drake just might be the final destination.

Tai Atunrase, DB, 2024, Cole (TX): The 6-foot and 180-pounder turned more than a few heads in this setting, with his counterpart Jacob Mott from China Spring (TX).

Makai Williams, LB, 2023, Steele (TX): Arkansas, Houston and Texas Tech, among many others, have their sights set on The 6-foot and 210-pounder. He’s the reals deal.

Camron Walker, LB, 2023, Crawford (TX): The 6-foot and 190-pounder has been in communication with the likes of Davidson and Drake. Others figure to follow suit, too.

Joe Gutshall, DL, 2023, Lorena (TX): Baylor and Oklahoma State saw something they liked in the 6-3 and 260-pounder. No surprise either, he got the job done here.

Noel Mekogue, DL, 2023, Sweetwater (TX): The 6-1 and 270-pounder was a force to be reckon with. He did just about whatever he pleased and whenever he wanted.