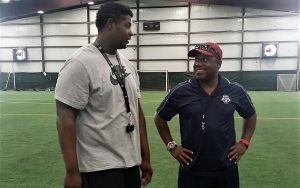 For the third time in as many years, more than a few prospects did well in the spotlight, and thus, were likely discovered at the Blue-Grey All-American Combine (Colorado Regional).

What follows next then, naturally, is a bit of much-needed insight on the many individuals in attendance and those that did a good job of taking advantage of the all-important opportunity.

Ryan Bornemeier, QB, Dalhart (TX): The 6-foot and 165-pound junior was about as athletic as they come. Gavin Herberg from Pine Creek (CO) was in the same category, for that matter.

Caden Meis, RB, Legend (CO): Apparently, Colorado State, Montana State and Northern Colorado are among the fans of the 5-10 and 195-pound junior. And rightfully so.

Caleb Gerber, RB, Pebble Hills (TX): With schools interested from the Mountain West Conference, and an offer to Air Force, sky’s the limit for the 5-10 and 170-pound junior.

Zachary Johnson, WR, Douglas County (CO): The 5-9 and 155-pound junior was a reliable presence not only over the middle, also along the sideline and down the field.

Matheu Sands, WR, Prairie View (CO): No stranger to the setting, the 5-10 and 164-pound junior held his own. Same thing can be said about Isaiah Talapu from Pine Creek (CO).

Jase Lanto, TE, Peyton (CO): The 6-6 and 235-pound sophomore looked the part. And played the part, too. Once a senior, he could be a close to a finished product.

Trevor Greenlee, DB, Grandview (CO): The 6-1 and 170-pound junior was explosive during skills testing, there was no questions about it, and he earned the respect of his peers

Daniel Bone, DB, Pine Creek (CO): Long and rangy, the 6-2 and 175-pound junior went out and competed on every rep. Thus, he endeared himself to the entire staff.

Mikey McCelland, OL, Chaparral (CO): With interest from the Mountain West Conference, mainly though Wyoming, the 6-2 and 250-pound junior is heading in the right direction.

Cameron Reiman, OL, Palmer Ridge (CO): The 6-3 and 270-pound sophomore grabbed the attention of many onlookers, along with Jacob Tafoya from La Junta (CO).

Hunter Paxton, DL, Sterling (CO): The 6-4 and 210-pound junior was difficult to stop, particularly when he came off the edge. His name might be one to remember.

Bennie Chacon, DL, Centauri (CO): With another growth spurt apparently in the works, the 6-2 and 240-pound junior appears poised to develop into a legit recruit.