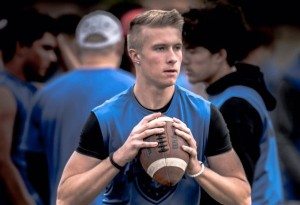 Promising prospect Jay Vanderjagt was among the many Grand Canyon State recruits in attendance for the recent Blue-Grey All-American Combine at the Arizona Cardinals facility in Phoenix (AZ). (Photo Credit: Andy Silvas)

After a long and distinguished career in the NFL, veteran Mark McMillian decided to spend some of his retirement days away from the field in the Grand Canyon State. Nowadays, of course, he’s giving back.

That was evident this weekend as McMillian was lead instructor for the fourth time in as many years during the Blue-Grey All-American Combine at the facility for the Arizona Cardinals in Phoenix (AZ).

He was joined by a handful of his one-time professional peers, including Byron Evans, Rick Cunningham, Jerome Daniels and George Martinez. Akron alum and NFL trainer Reggie Young was also in attendance.

What follows is a closer look at the individuals in attendance, some of them high-profile prospects and others failing in to the category of under-the-radar types. So, with that, let’s get down to business.

Jay Vanderjagt, QB, Coronado (AZ): With NFL bloodlines in his system, the 6-foot-3 and 175-pound junior proved that the apple doesn’t fall from the tree, while still making a name for himself.

Jerman Gotoy, QB, Lawndale (CA): The 6-2 and 202-pound junior turned out to be a pleasant surprise, and when all was said and done, he endeared himself to many on the coaching staff.

Sean Barton, QB, Salpointe Catholic (AZ): With a frame worthy of what appears to be second look, the 6-2 and 170-pound junior had zip and put receivers in good positions to make plays.

Wade Sapergia, QB, Hamilton (AZ): Still developing, the 6-2 and 210-pound sophomore appeared ahead of the curve. So did fellow underclassmen Zach Shepherd from Williams Field (AZ).

Isaac Haney, RB, Centennial (AZ): The 5-10 and 180-pound junior was tough and durable. Also equipped with a good set of hands, he was about as well-rounded as anyone on the field.

Kaleb Hardin, RB, Skyline (AZ): A bigger back, the 6-1 and 190-pound junior was nimble as well. In the open field, for example, he made the opponent miss on several different occasions.

Daniel Eriven, RB, Hamilton (AZ): The 5-9 and 185-pound junior had tempered expectations at the start. In the end, however, he produced solid results and was as confident as anyone.

Kade Warner, WR, Desert Mountain (AZ): In terms of stepping from the shadows of a famous NFL father, the 6-2 and 205-pound junior took a major step forward and carved out a niche.

Jacob Christofferson, WR, Boulder Creek (AZ): The 6-1 and 160-pound junior ran plenty of precise routes and caught seemingly everything thrown in his direction. He certainly impressed.

Jordan Pace, WR, Shadow Mountain (AZ): A big target with sure hands, particularly around the red zone despite coverage, the 6-3 and 185-pound junior turned heads from start to finish.

Tre Hart, WR, Chandler (AZ): The 5-11 and 165-pound sophomore is few years away from realizing his true potential. Nevertheless, there’s no denying the upside in his possession.

Diquan Brown, WR, Las Vegas (NV): The 5-9 and 160-pound sophomore held his own, and then some, a somewhat surprising accomplishment given his peers were far more experienced.

Justin Akinsipe, WR, Basha (AZ): Eager to prove himself, the 6-3 and 163-pound junior earned respect. Same thing could be said for Hunter Compise from Liberty (AZ) before an injury.

Michael Gombert, TE, Cactus Shadows (AZ): The 6-3 and 235-pound junior has been in contact with schools in the Pac-12 Conference, specifically nearby Arizona and Arizona State.

Tre Bugg, DB, Williams Field (AZ): It’s only a matter of time before the 6-foot and 175-pound junior lands a scholarship. At least five programs are close to pulling the trigger on an offer.

Tyler Alexander, DB, Hamilton (AZ): The 5-8 and 167-pound junior, often considered to be undersized by onlookers, proved the naysayers wrong. His game is nearly ready for college ball.

Brad Beaver, DB, Desert Ridge (AZ): Physical and fast, the 6-2 and 190-pound junior was one of the more polished prospects on hand. Accordingly, he gave receivers problems throughout.

Rourke Freeburg, DB, Desert Mountain (AZ): The 6-2 and 200-pound junior looked the part. And played the part. Once word spreads about his effort, scouts figure to express interest.

DeAndre Hughes, DB, Tempe (AZ): A competitor, the 5-9 and 165-pound junior did not take one play off at the workout. Ezekiel Robbins from Hamilton (AZ) was in the same category.

Braden Valentine, LB, Williams Field (AZ): The 6-1 and 225-pound junior with interest from West Coast schools, had the look of an individual destined to play ball at the next level.

Ladimor Hervey, LB, Hamilton (AZ): No stranger to this kind of setting after receiving several invites over the years, the 6-foot and 215-pound junior excelled in all facets of the game.

Tyler Halvorsen, LB, Skyline (AZ): The 6-1 and 192-pound junior took reps on offensive and is a capable fullback. Still, he could end up finding a home at the second level on defense.

Jerome Daniels, LB, Chandler (AZ): Relatively new to the combine structure of things, the 6-1 and 185-pound sophomore picked up many of the concepts in a quick and timely manner.

Jonathan Nathaniel, OL, Basha (AZ): The 6-5 and 250-pound junior might have been the most polished prospect around. Accordingly, his list of offers continues to grow, and grow.

Ian Fox, OL, Greenway (AZ): Well-versed in the pass and run game, the 6-4 and 300-pound junior took on everyone. Worth mentioning, he got the better of most one-on-one exchanges.

Nicholas Omitt, OL, Desert Ridge (AZ): The 6-4 and 260-pound junior got stronger, and better, as the day progressed, along with counterpart Jaden Hoyt from Northwest Christian (AZ).

Kobey Rushton, OL, Bradshaw Mountain (AZ): Built low to the ground and compact, the 6-2 and 255-pound junior lined up at center and did whatever the coaching staff asked of him.

George Campos, OL, Maryville (AZ): The 6-2 and 250-pound junior and Javier Chavez from Sequoia (AZ) were underestimated at the start. The perception changed by day’s end though.

Jalen Harris, DL, Desert Ridge (AZ): With a scholarship count that continues to climb, and is approaching 20 offers, the 6-4 and 210-pound junior lived up the hype with his effort here.

Brayden Flynn, DL, Hamilton (AZ): The 6-3 and 220-pound sophomore flashed several times, and in doing so, he caught the attention of many onlookers. Bottom line, his ceiling is high.

Anthony Nicastro, DL, Marcos De Niza (AZ): With a motor that does not stop, the 6-3 and 230-pound junior had one gear, full-speed. Good thing was, he never seemed to tire, either.

Jeremiah Russell, DL, Millenium (AZ): The 6-3 and 250-pound junior was not nearly as vocal as other in the trenches. Instead, he let his play speak volumes about him as a prospect.

Nehru Baskin, DL, Las Vegas (NV): A tireless worker, the 6-2 and 220-pound junior gave maximum effort when given the chance. Not surprising, he endeared himself to the coaching staff.

Editor’s Note: Andy Silva took professional photos during the workout, from start to finish, mind you. Feel free to take a look at the many different images on his site (click this link for more info).