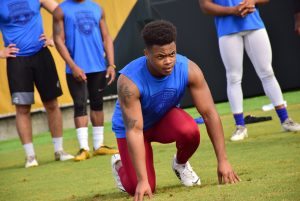 SEC target Willie McKnight was among the prospects who left a lasting impression at the recent Blue-Grey All-American Combine at Jacksonville Jaguars’ EverBank Field.

The hype surrounding the recent Blue-Grey All-American Combine (First Coast Regional) was unstoppable once the time finally rolled around for the workout to take place at the Jacksonville Jaguars’ EverBank Field.

In retrospect, and based on evaluations from the coaching staff of NFL veterans in attendance, no one was disappointed with the overall effort of the recruits on hand. In most cases, expectations were met and then exceeded.

In terms of the one-time professionals on hand, there certainly was no shortage of experience mentors as Mark McMillian, Ken Stills and Quinn Gray, among many others, gave back to the game. The list goes on, and on, in fact.

Below is list of the many prospects, some high-profile and others under-the-radar, who left a lasting impression. Those interested in learning more about the numbers from individual skills testing, we have the info (click on this link).

Walker Wright, QB, West Nassau (FL): The 6-foot-1 and 160-pound junior, arguably, was the best out of a well-rounded bunch of signal-callers. He left a lasting impression, to be sure.

Willie McKnight, RB, Gainesville (FL): The 5-8 and 172-pound junior opened up plenty of eyes. Not surprising, schools from the SEC have contacted him, particularly Tennessee.

Stephen Butler, WR, Mandarin (FL): Big and fast, the 6-3 and 185-pound junior could emerge into a valuable asset at tight end. Only time will tell. Stay tuned in the meantime.

Steven  Mackey, DB, Lake Howell (FL): The 5-9 and 150-pound junior turned more than a few heads. Rightfully so given his well-rounded skill set. He’s certainly one to watch.

Zayvion Wallace, DB, McArthur (FL): Capable in man-to-man coverage, or zone scheme, the 5-10 and 185-pound junior did not back down from any challenges presented to him.

Jason Reese, LB, Braddock (FL): The 5-11 and 158-pound junior has talked to teams in the Ivy League, as well as the Patriot League. Other programs figure to come calling, too

Tyler Falvey, OL, Lake Brantley (FL): On the radar of several teams located in the ACC, the 6-4 and 300-pound junior was seemingly a man among boys, as they so often so.

Josh Colston, DL, East Ridge (FL): The 6-3 and 250-pound junior was difficult to deal with down deep in the trenches. Safe to say, he caused problems from start to finish.