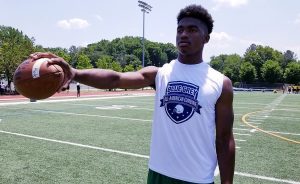 In terms of debuts, with those taking place all over the country, they don’t get much better than the Blue-Grey All-American Combine (Georgia Regional).

NFL veteran Mark McMillian put together a knowledgeable staff for the workout’s audition in Atlanta (GA) and each was happy to give back to the game.

Stacy Harrison, Maceo Hurd, Roderick Bradford and Mike Pringle were among the coaches and they seemed to be impressed with the following participants.

David Baros, RB, Rockdale County (GA): The 5-9 and 170-pound junior has received some interest from Georgia State, among other programs. That’s just the start.

Zach Bowling, RB, Cave Spring (VA): Temple is one of a handful of schools that appear to be keeping tabs on the 5-10 and 200-pound junior. Let’s see where this goes.

Justin Bronson, WR, Maynard Jackson (GA): The 5-10 and 165-pound junior nearly stole the show. No surprise, he’s on the radar of both Auburn and Clemson.

Dominique Kershaw, WR, West Ashley (SC): The 6-1 and 190-pound junior was difficult to stop. Coastal Carolina has talked with him. Other schools will follow suit.

Dawson Lackey, TE, Gordon Central (GA): Georgia State was first to jump on the bandwagon of the 6-4 and 240-pound junior. Vanderbilt is currently in the mix.

Devonte Mathews, DB, Central (AL): Alabama-Birmingham, Jacksonville State and Samford are a few in the hunt for 5-10 and 170-pound junior. And rightfully so.

Kole Williams, DB, Carver (AL): The 6-2 and 200-pound sophomore, who is skilled and talented enough to play quarterback, has an offer from Bowling Green.

Jamie O’Quinn, DB, Stratford Academy (GA): The 6-1 and 180-pound junior was physical throughout and could land at either Georgia Southern and Georgia State.

Justin Harris, DB, Etowah (AL): On the roster, but not in attendance, the 6-2 and 175-pound junior has scholarships in place from Memphis and Northwestern.

Jontrell Wells, LB, Southeast Bullock (GA): Impressive from start to finish, the 6-foot and 215-pound junior has feelers from teams in the Southern Conference.

Jaylin Williams, LB, Banneker (GA): The 5-8 and 195-pound junior was a favorite of the coaching staff by the workout’s end, particularly when it comes to McMillian.

Levinte Washington, LB, Chamblee (GA): The 5-10 and 210-pound junior did not back down from any challenges. In the end, he won more battles than he lost.

Corby McIntire, OL, Hephzibah (GA): Georgia Tech has reached out to the 6-4 and 320-pound junior. It will be interesting to see if, and when, an offer materializes.

Daniel Hataway, OL, Kinston (AL): The 6-2 and 295-pound junior was difficult to deal with, as was John Holland from New Kent (VA) and Jack Busch from Bluff (AL).