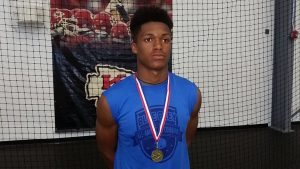 Regardless of class distinction, underclassman Marquis Majors was one of the top prospects in attendance at the recent Blue-Grey All-American Combine (Heartland Regional) located at the training facility of the Kansas City Chiefs.

Without much question, a must-stop on the nationwide circuit for the Blue-Grey All-American Combine is the training facility for the Kansas City Chiefs at Missouri Western State University in St. Joseph (MO).

Between the venue, the prospects in attendance from all over the country, expectations consistently met. Often times, exceeded. This past weekend, in fact, was no different than others in recent memory.

NFL veterans Mark McMillian and Arlen Harris were once again lead instructors and both one-time pros had nothing but good to things to say about the recruits who participated during the two-day workout.

Plans are in the works already for a return to the Show Me State for the next Heartland Regional. Details are on the way, so stay tuned. In the meantime, here are several highlights from Saturday and Sunday.

Chase Templeman, QB, Gretna (NE): Plenty has changed since last year’s debut of the 6-foot-2 and 187-pound junior. Nowadays, of course, schools from the Missouri Valley Football Conference are interested.

Sam Huckabee, QB, Summit Christian Academy (MO): The 6-3 and 195-pound junior looked the part and played the part. With poise in the pocket, and an uncanny ability to throw on the run, he delivered.

D.J. Kemp, QB, Orchard Farm (MO): After establishing himself as one of the top signal-callers early in the afternoon, the 6-2 and 165-pound junior didn’t simply settle for a good start. He finished strong, too.

Elijah Green, RB, Maryville (MO): The 6-foot and 215-pound junior has been in contact with Nebraska and Purdue, among several other programs, and it comes as no surprise after seeing him in action.

Israel Smith, RB, Central (MO): South Dakota State is one of the programs who have talked with the 5-10 and 200-pound junior in the not so distant past. It’s reasonable to think others will soon follow suit.

Brayden Hull, RB, Timberland (MO): The 5-10 and 205-pound junior is no stranger to this type of setting. Like clockwork, naturally, he excelled in the environment and left a lasting impression on the staff.

Dylan Kautz, RB, Norfolk Catholic (NE): A few years from now, given the skill set on display this weekend, odds are the 5-9 and 165-pound freshman will have emerged as legit prospect. You heard if here first.

Cameron Glenn, RB, Lutheran (MO): The 5-10 and 210-pound junior was somewhat of a late entry, but worth the wait. Not sure what was more impressive, his ball-carrying efforts or pass-catching exhibition.

Marquis Majors, WR, Fort Zumwalt West (MO): Regardless of class distinction, the 6-foot and 170-pound sophomore was the premier prospect around. Suppose that explains his interest from Iowa and Iowa State.

Jason Edwards, WR, School of Osage (MO): The 6-2 and 180-pound junior was another familiar face in the crowd. Also worth noting, for the second time in as many workouts, he made a major impact.

Tavien Gardner, WR, Urbandale (IA): Quick and also elusive, the 5-9 and 160-pound junior fact became a favorite of the signal-callers on hand. With Ivy League interest now, other schools could come calling.

Haaken Friend, WR, Lighthouse Christian (MO): The 6-6 and 210-pound junior presented a big target down in the red zone, for obvious reasons with his frame. Once there, he caught everything thrown his way.

Brendan Webb, TE, Buhler (KS): Effective on the defensive line, the 6-4 and 200-pound sophomore was able to show off his versatility. With above average speed, however, he might find a home on offense.

Luis Lam, LB, Lexington (NE): The 5-9 and 185-pound junior had a motor that wouldn’t stop. He knew one speed and his foot was on the gas pedal throughout. That said, the effort will not be forgotten.

Gunner Todorovich, LB, Papillion La Vista South (NE): In his debut, the 5-11 and 220-pound sophomore did rather well. So did Joseph Watskey from Miege (KS) and Tanner Buckley from Shawnee Heights (KS).

Turner Ellis, LB, Urbandale (IA): Having been in constant contact with colleges in the Big 10 Conference, the 6-1 and 210-pound junior was a welcomed addition to the official roster on the final day of things.

Nathan White, DB, Oak Grove (MO): The 6-foot and 170-pound junior emerged on the radar during the skills testing. Nothing changed thereafter. He also did an admirable job once the one-on-ones started.

Cody Ladson, DB, Washburn Rural (KS): A bigger type of body in the secondary with athleticism, the 6-1 and 205-pound junior made good decisions, an important factor as one of the last lines of defense.

Tyson Stites, DB, McPherson (KS): The 6-foot and 170-pound sophomore held his own against more experienced competition and the same thing can be said about Mikhail Sands from Prairie View (CO).

Jesse Hoffman, OL, Blue Valley West (KS): When it comes to the top recruits at his particular position, no one was better than the 6-4 and 305-pound junior. He took care of business from start to finish.

Danny Shields, OL, Washburn Rural (KS): The 6-3 and 250-pound junior was determined as they come, there was not an individual there that he was going to outwork him. Mission accomplished, too.

Colby Lathrop, OL, Lebanon (MO): Perhaps not nearly as polished as some of his peers in the trenches, the 6-4 and 270-pound junior had heart. That made up for what he might have lacked in other areas.

Kevin Williams, DL, Omaha North (NE): The 6-6 and 325-pound junior picked up his first offer last week from Nevada. Several different teams from the Big 12 Conference are also in the mix for his services.

Jordin Linn, DL, Neodesha (MO): Kansas State and Wyoming are couple of the programs who are taking a long look at the 6-4 and 280-pound junior. Rightfully so given the fact he possesses some upside.

Tyrekus Birch, DL, Wichita South (KS): The 6-5 and 220-pound junior has flown underneath the recruiting radar for a while. Too long, for that matter. His status as a relative unknown figures to soon change.

Caden Robinson, DL, Summit Christian Academy (MO): Eager to prove that he belonged, the 6-3 and 265-pound junior took a sizeable step forward. So did Derrick Calhoun from Hazelwood East (MO).