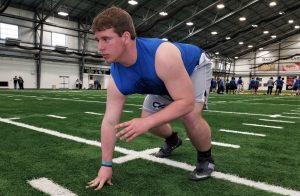 Patriot League target Elliott Strahm was among the many prospect at the Blue-Grey All-American Combine (Heartland Regional).

Safe to say, NFL veterans Mark McMillian and Arlen Harris are certainly no strangers when it comes to the ins and outs of the Blue-Grey All-American Combine (Heartland Regional).

Keep this in mind too, each of the one-time professionals has been an instructor with the brand for a number of years now, this coming after their days were done playing on Sundays.

The individuals in attendance at the workout were the real winners, given the experience of McMillian and Harris. So, let’s take a look at those who impressed the powers that be.

Arlen Harris Jr., RB, Lutheran St. Charles (MO): The 5-9 and 165-pound freshman-to be was not intimidated by the big stage. The spotlight suited him just fine, in fact.

Messiah Manning, RB, Raytown (MO): The 5-8 and 155-pound junior turned many heads along with counterpart Samuel Sanderson from Pattonville (MO).

Isaiah Davis, RB, Joplin (MO): A bigger back, the 6-1 and 205-pound sophomore showed somewhat surprising athleticism. The future is bright for him.

Drelyn Carroll, WR, Bonner Springs (KS): Missouri State has reached out to the 6-3 and 170-pound junior and other schools could soon join in on the process.

Billy Conaway, WR, Shawnee Mission (KS): Reliable over the middle, on the sideline and down the field as well, the 6-foot and 198-pound junior held his own.

Dontae Manning, WR, Raytown (MO): The 6-1 and 184-pound sophomore caught just about everything thrown his way, as did Dylan White from Pittsburg (KS).

Micah Manning, RB, Lee’s Summit (MO): the 5-9 and 165-pound sophomore went out and made a name for himself. Now, the time has come to seize the momentum.

Mathis Givens, DB, Muskogee (OK): No matter the opponent, receiver, tight end or running back, the 5-9 and 170-pound junior shutdown anyone, and everyone in his way.

Trey Vaval, DB, Blue Springs South (KS): After a while, they stopped throwing toward the 6-foot and 160-pound junior with interest from North Dakota and South Dakota.

Tyler White, DB, Carl Junction (MO): The 5-11 and 170-pound junior competed on each and every rep, as did his peer Devante Washington from Bonner Springs (KS).

Jaylynn Liggons, DB, Manhattan (KS): Eager to prove that he belonged, the 5-11 and 169-pound junior was among the hot topics of conversation for the coaches.

Dewade Black, LB, Wichita East (KS): The 5-10 and 162-pound junior grabbed the attention of most during skills testing and the focus never wavered thereafter.

Joshua White, LB, Raytown (MO): The 5-9 and 220-pound junior had one gear, full-speed ahead. It was all gas, no brakes. Naturally, his motor never stopped running.

Jacob Rogers, LB, Sutton (NE): The 6-1 and 200-pound sophomore has a high ceiling. Colton Hill from Seward (NE) is heading down an eerily similar path.

Ikani Tuiono, OL, Fort Osage (MO): Regardless of class distinction, the 6-3 and 285-pound sophomore might have been best of bunch. Watch out when he’s a senior.

Josh Baker, OL, Eureka (MO): Another underclassman with upside, the 6-3 and 280-pound sophomore won many more battles than he lost during one-on-ones.

Tommy Tholen, OL, St. Thomas Aquinas (KS): Determined to succeed down in the trenches, the 6-2 and 252-pound junior was able to deliver favorable results.

Andrew Raney, OL, Carthage (MO): One of the stronger recruits around, the 6-2 and 320-pound junior was seemingly a man among boys in the weight room.

Elliott Strahm, DL, Sabetha (KS): Butler and South Dakota were the first to reach out to the 6-2 and 265-pound junior. Kansas State appears to be in the mix, too.

Jake Heineman, DL, Fremont (NE): The 6-4 and 245-pound junior opened up eyes, so did Julian Rangel from Center (MO) and Jaron Story from Willow Springs (MO).