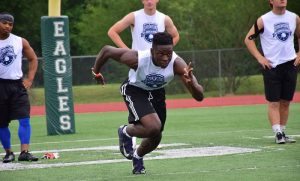 Conference USA target Simi Bakare was among the many individuals who did well at the Blue-Grey All-American Combine outside of Houston (TX). (Photo courtesy of Clark Sports Media)

There was an undeniable buzz around the Blue-Grey All-American Combine (Houston Regional), and when all was said and done, expectations were met, also, exceeded during the workout.

NFL veteran Chris Taylor, with the help of NFL veteran trainer Reggie Young, worked well in advance to assemble what they thought would be a well-rounded staff. Mission accomplished.

The listed of one-time professionals who served as instructors to the prospects in attendance included the likes of Sean Salisbury, DaShon Polk, Charles Spencer and Michael Ray Garvin.

In the end, naturally, the recruits were the big winners and benefitted the most. That said, what follows is a closer look at the individuals who left a lasting impression on Taylor, Young & Co.

Peyton Matocha, QB, St. Thomas (TX): Despite his age, the 6-foot-4 and 200-pound sophomore turned some heads. Suppose that explains interest from Louisiana Tech and SMU.

Xavier Martin, QB, Humble (TX): The 6-2 and 215-pound junior was athletic as they come. Colt Gorman from Sinton (TX) and Wade Freeman from George Bush (TX) also did well.

Jahmyl Jeter, RB, William J. Brennan (TX): With offers from Bowling Green and SMU, hype surrounded the 6-1 and 210-pound junior. He lived up to the advanced billing, too.

Simi Bakare, RB, Cedar Ridge (TX): The 6-foot and 190-pound junior opened plenty of eyes at the start and then kept everyone’s attention. SMU and Tulsa have been in contact.

Reggie Robinson, RB, Tomball Memorial (TX): With many well-known names on hand, the 6-1 and 185-pound junior could have been overlooked. That, however, was not the case.

Truedale Archer, WR, Douglass (OK): The 5-11 and 162-pound junior has flown under the radar for a while. Those days are over though, after word spreads about his effort here.

Erik Pizarro, WR, Rio Hondo (TX): Good along the sideline, over the middle, and down the field, the 5-10 and 175-pound junior often made the difficult catch appear relatively easy.

Erick Young, DB, Bush (TX): The 6-foot and 185-pound sophomore, regardless of class distinction, might have had the most upside of the group. Houston and Texas A&M are fans.

Jordan Oliver, DB, Kempner (TX): Stephen F. Austin recently put the first offer in place for the 5-11 and 168-pound junior. SMU, Texas State and Tulsa are other schools in the mix.

Kameron Campbell, DB, George Ranch (TX): The 6- 2 and 180-pound junior is moving up the boards of many programs, perhaps most notably being North Texas and UTSA.

Corteze Hurd, DB, Marshall (TX): Kansas and Tulsa have kept the lines of communication open with the 6-1 and 175-pound junior. Worth noting, he can play multiple positions.

Tristen Wooten, DB, Austin (TX): The 5-10 and 175-pound junior has a dialogue going with Air Force and Navy. It’s a mere matter of time before that first scholarship materializes.

Noah Haygood, DB, Manvel (TX): The 5-10 and 165-pound sophomore is heading down the right path. If he keeps on the straight and narrow, college interest will follow suit.

John Rodriguez, LB, Cuero (TX): The 5-10 and 205-pound junior has had feelers from Texas State and North Texas in the not so distant past. He needs to keep that momentum.

Noah Nelson, LB, Stafford (TX): Didn’t matter, running back or tight end, the 5-10 and 207-pound junior was determined to stop the opponent lined up directly across from him.

Chris Elam, OL, Kingwood (TX): The 6-5 and 328-pound junior has two offers and teams in the Big 12 Conference are ready to jump on the bandwagon. It’s going to get crowded.

Aaron Galitz, OL, Orangefield (TX): At first glance, you certainly noticed the frame of the 6-3 and 310-pound junior. Same thing can be said about David Marling from Klein (TX).

Nick Carbajal, OL, Turner (TX): The 6-3 and 285-pound junior was another big body who was able to get the job done, along with counterpart Kendall Dearth from Atascocita (TX).

Melik Owens, DL, Cy-Ridge (TX): Boise State, Houston and Kansas have expressed interest in the 6-2 and 215-pound junior. Safe to say, that list is going to continue to grow, and grow.

Tiren Forney, DL, Nederland (TX): The 6-1 and 225-pound junior put in his hand in the ground along the line, stood up from his spot at linebacker, and made big plays throughout.

Sky Tatum, DL, Harlingen South (TX): Stronger as workout went on, the 6-3 and 215-pound junior had a motor that simply did not stop, as did Jake Hernandez from Eastwood (TX).