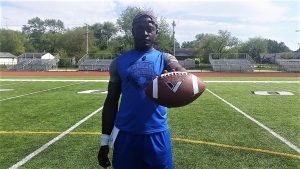 Virginia Tech commit Quincy Patterson was among the well-known national names on hand at the Blue-Grey All-American Combine outside of Chicago (IL).

Right or wrong, in the not so distant past, the Midwest has not normally received near enough credit on the national level for having a well-rounded collection of talented prospects.

This much is fairly certain, however, particularly so after the Blue-Grey All-American Combine (Illinois Regional), the time has finally come to stop overlooking this part of the country.

NFL veteran Nate Turner, Arthur Ray and Reggie Young, agree with the unfair slight, and following the recent workout, here are the recruits who impressed the one-time professionals.

Quincy Patterson, QB, Solorio Academy (IL): A Virginia Tech commit with plenty of upside, the 6-foot-3 and 235-pound junior exceeded expectations and will soon play in the brand’s All-American Bowl.

Coran Taylor, QB, Peoria (IL): An Illinois commit, the 6-3 and 205-pound junior did well in the spotlight, and accordingly, he’ll join Patterson in the big game on the national stage.

Nyrel Sullivan, RB, Sterling (IL): The 5-10 and 170-pound junior is heading down the right path. He boasts interest from Illinois State, Northern Illinois and Southern Illinois.

Caleb Lahey, RB, Bismarck-Henning (IL): The 5-11 and 200-pound freshman often played with the poise of a varsity starter, instead of a perceived inexperienced underclassman.

Khali Saunders, WR, Immaculate Conception (IL): Young, and raw, the 6-4 and 190-pound sophomore is on the verge of figuring things out. Western Michigan is interested, too.

Nic Johnson, WR, Cromwell-Wright (MN): The 5-9 and 163-pound junior opened up some eyes during skills testing and kept everyone’s attention once the one-on-one session started.

Khalil Saunders, DB, Immaculate Conception (IL): In possession of plenty of upside, the 6-2 and 175-pound sophomore has a bright future ahead of him. Remember his name.

Cameron Smolik, DB, Van Meter (IA): The 6-foot and 180-pound sophomore has been contacted by Iowa and Missouri. Dequan Jones from Bloom Trail (IL) did a good job, as well.

Kelil Frames, LB, Bowsher (OH): With a motor that did not stop, the 6-1 and 215-pound junior had one hear, naturally being full-speed ahead. He was fun to watch, rest assured.

Reggie Young, LB, Westmont (IL): The 5-10 and 221-pound sophomore did not once back down from any challenge. In the process, he earned the respect of many counterparts.

Wyatt Blake, OL, Crystal Lake Central (IL): A Northwestern commit, and prior to playing on Saturday’s, the 6-4 and 308-pound junior will line up in the brand’s All-American Bowl.

Ty McCaskill, OL, Penn (IN): The 6-5 and 295-pound junior has a scholarship in place from Illinois State and others figure to follow suit as word spreads about his effort here.

Ryan Possley, OL, Preble (WI): Teams in the Missouri Valley Football Conference are interested in the 6-4 and 290-pound junior. Iowa and Minnesota are in the mix, worth noting.

Matt Fagan, OL, St. Albert (IA): The 6-5 and 255-pound junior has talked with the likes of North Dakota State and South Dakota State. Don’t count out nearby Iowa State either.

Nick Boehm, OL, De La Salle (IL): The 6-3 and 295-pound junior has what it takes to make an immediate impact at the next level, perhaps in the Pioneer Football League.

Alex Paredes, OL, Bolingbrook (IL): The 6-3 and 285-pound sophomore did not seem to be the least bit intimated by his well-known peers. There’s a lot to like about him.

D’Angelo Dixon, DL, Chicago Military Institute (IL): Up to the test against some stiff competition, the 6-4 and 250-pound junior went out and impressed the powers that be.

Michael Johnson, DL, Immaculate Conception (IL): The 6-2 and 245-pound sophomore was eager to learn and picked up plenty of tools that will be useful in the future.