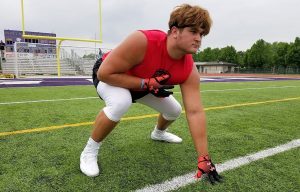 Wisconsin commit Joe Tippmann was among the prospects at the Blue-Grey All-American Combine (Illinois Regional).

For the fourth time in as many years, and with plenty of hype beforehand, the Blue-Grey All-American Combine (Illinois Regional) delivered on lofty expectations, thanks to the efforts of NFL veterans Arlen Harris, Nate Turner, Sean Cattouse and Keith Otis.

With the one-time professional coaching staff in place, the prospects in attendance were set up for success, naturally. Many of the individuals, in fact, left a lasting impression on the instructors. That said, it’s time to take a closer look at the many standouts.

Ben Watson, QB, Ft. Zumwalt East (MO): The 6-foot and 185-pound junior, with contact from the Patriot League, wasn’t on hand. Still, he plans to attend another workout. In his absence, Cameron Kittle from Trimble (OH) and Kobey Mazur from Momence (IL) did well.

Jeremiah Dockery, WR, Washington (IN): The 5-10 and 175-pound junior was a competitor, not only did he fight for every ball, but battled on every rep.

Devonta Hall, WR, Washington (IN): Over the middle, on the sideline, down the field, the 5-10 and 170-pound junior did just about whatever he wanted.

Cameron Reynolds, WR, Rossford (OH): The 6-3 and 195-pound junior has talked with teams in the Mid-American Conference (MAC), particularly Akron.

Josh Marshman, WR, East Troy (WI): The 6-5 and 195-pound junior held his own. Darius Hernandez from La Feria (TX) was in the same kind of category.

Kyle Davis, DB, Mae Jemison (AL): On paper, the 5-10 and 170-pound sophomore appeared young. In the end, he might turn out to be the best out of the bunch.

Jaron Banks, DB, Lima Central (OH): Fast and physical, the 5-9 and 170-pound junior was up for anyone, and anything. He earned the respect of his peers, too.

Allen Jackson, LB, Bishop Luers (IN): On the roster, but a no-show due to unforeseen circumstances, the 6-1 and 235-pound junior has talked with Miami (OH).

Joe Tippmann, OL, Bishop Dwenger (IN): A Wisconsin commit, the 6-6 and 295-pound junior could be the premier prospect on the entire workout circuit.

Dominic Collado, OL, Crystal Lake (IL): The 6-4 and 290-pound sophomore is a Mid-American Conference (MAC) target with an offer from Central Michigan.

Mitchell Gildehaus, OL, St. Francis Borgia Regional (MO): Texas State could be considered as the current front-runner for the 6-4 and 245-pound sophomore.

Myles Newsome, OL, Everman (TX): The 6-2 and 275-pound junior was strong as they come. He moved people and the pile quite often, seemingly at will.

Deion Harry, DL, Crete-Monee (IL): In a class all his own, with an offer from North Dakota, the 6-6 and 245-pound junior couldn’t be stopped, most times.

Jack Wardzala, DL, Roncalli (IN): The 6-1 and 225-pound sophomore, with a high ceiling and room to grow, has been on campus with the likes of Akron.

Ty Jackson, DL, Illini West (IL): Western Illinois is an apparent fan of the 6-2 and 290-pound junior and other schools figure to jump on the bandwagon.

Reide Wilson, DL, Granite City (IL): The 6-2 and 205-pound sophomore did well, with Malyk Newsome from Everman (TX) and Chandler Austgen from Lowell (IN).