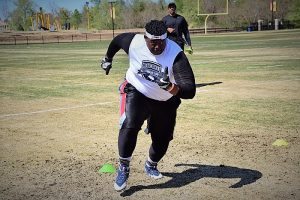 With close to double-digit offers, Juwan Callines was one of the more well-known national names at the Blue-Grey All-American Combine in Richmond (VA). (Photo courtesy of Clark Sports Media)

For the third time in as many workouts, NFL veteran Billy McMullen was the lead instructor at the Blue-Grey All-American Combine (Mid-Atlantic Regional), this one held just last weekend.

After several discussions about the many prospects in attendance at Bon Secours Washington Redskins Training Facility, the one-time professional was pleased with the collection of talent.

What follows, naturally, is some insight about the individuals who left a lasting impression on McMullen & Co. Without further ado then, it’s time to reveal a few of the afternoon’s highlights.

Merlys Manuel, QB, Huguenot (VA): The 6-foot-2 and 195-pound junior, who’s related to NFL veteran E.J. Manuel, had little, or no, problems with adjusting to this type of environment.

Tyler Tabor, RB, Norfolk Academy (VA): Versatile, and capable of playing on the other side of the ball, the 5-10 and 220-pound did a little bit of everything. Most of it well.

Jebril Murray, WR, Glen Allen (VA): The 5-10 and 170-pound junior was a step ahead of his peers. With multiple offers, his scholarship count could reach double digits soon.

Michael Horsford, WR, Douglas Freeman (VA): No stranger to the setting, and for the second time in as many years, the 6-2 and 190-pound junior did well on the big stage.

John Johnson, WR, Atlee (VA): The 5-7 and 140-pound junior flashed several glimpses of potential, along with the likes of Jon Tobin from Jefferson Forest (VA).

Andre Ross, WR, National Collegiate Prep (VA): With a frame coveted by most colleges at the next level, the 6-3 and 185-pound junior went out and earned respect.

Walter Nelson, WR, Mount Hebron (MD): The 6-foot and 182-pound junior was eager to prove that he belonged. When all was said and done, mission accomplished for him.

Tyrese Williams, WR, Varina (VA): The 5-9 and 170-pound sophomore, on paper, did not have as much experiences as his peers. Still, he played with an upperclassman’s poise.

Leroy Thomas, DB, Patrick Henry (VA): In time, the 5-10 and 170-pound sophomore could develop in to a force to be reckon with in the secondary. Keep an eye out for him.

Peyton Carneal, LB, Gloucester (VA): An Ivy League target, particularly for Penn and Princeton, the 6-foot and 230-pound junior turned the heads of coaches from start to finish.

Anthony Pleasants, LB, Brunswick (VA): The 6-foot 190-pound junior was difficult to deal most times. Same thing can be said about Deandre Faulk from Lakeland (VA).

Juwan Callines, OL, Norcom (VA): Without a doubt, the marquee name on hand, the 6-6 and 345-pound junior lived up to the hype. Accordingly, he has multiple offers in place.

Colin Mott, OL, Colonial Heights (VA): The 6-4 and 265-pound junior held his own and received interest from the Big South Conference and Mid-American Conference (MAC).

Greg Fields, DL, Courtland (VA): First thing that jumped out was the frame, yet somewhat surprisingly, the 6-3 and 340-pound junior turned out to be athletic as anyone.

Drew Binion, DL, Stonewall Jackson (VA): The 6-2 and 270-pound junior didn’t back down from any challenges. Tyrese Dudley from John Handley (VA) also did well.