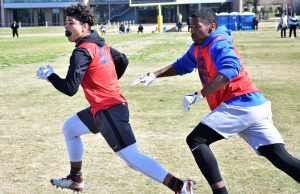 Elijah Hawks was among the many prospects at the Blue-Grey All-American Combine (Mid-Atlantic Regional).

Once again, with a staff led by NFL veteran Billy McMullen, the Blue-Grey All-American Combine (Mid-Atlantic Regional) delivered results and exceeded many expectations.

McMullen was joined by one-time pros such as Tavon Mason, J’Vonne Parker and Mark Parson with the workout held at Bon Secours Washington Redskins Training Facility.

What follows, naturally, is some much-needed insight about the individuals who left a lasting impression on the instructors in attendance. That said, here’s a much closer look.

Jacob Knight, QB, Cave Spring (VA): All eyes were on the 6-foot-4 and 215-pound junior. Rightfully so given interest from colleges, Temple and Wake Forest, among them.

Jabari Blake, QB, Heritage (VA): The 6-3 and 210-pound junior remained in contact with Old Dominion, and with continued improvement, an offer could soon materialize.

Kevin Henderson, RB, Manchester (VA): His numbers during skills testing were a pleasant surprise and the 5-9 and 170-pound junior kept the momentum in one-on-ones.

Upton Bailey, RB, Petersburg (VA): Fast, and strong, there wasn’t much that the 5-11 and 187-pound sophomore could not do, also accomplish. He passed every test.

Carter Rivenburg, RB, Buffalo Gap (VA): A bigger back, the 6-foot and 180-pound junior went out and got the job done, so did Cephas McKinney from Asher Farms Academy (VA).

Ahkee Vaughan, WR, Garner (VA): The 5-7 and 160-pound junior was a Colonial Athletic Conference target and the goal is to attract interest from North Carolina State.

Christopher Houston, WR, Clover Hill (VA): Unstoppable at times, and most certainly difficult to contain throughout, the 5-9 and 160-pound junior nearly stole the show.

Devin McCray, DB, Goochland (VA): Schools from Conference USA, specifically speaking Old Dominion, seem to be on the bandwagon of the 5-11 and 160-pound sophomore.

Jalon Moore, DB, Garinger (NC): Versatile as the come, he can line up on offense as well, the 5-11 and 175-pound junior could eventually find a home in the secondary.

Sincere Adams, DB, Manchester (VA): Best on best, whenever and wherever the top receiver lined up, the 5-11 and 160-pound junior followed. He won most exchanges, too.

John Barber, LB, Abermarle (VA): The 6-foot and 185-pound junior was relentless, seemingly no one had a better work ethic. That said, the trait endured him to the staff.

Devon Lynch, LB, Robert E. Lee (VA): The 6-1 and 190-pound junior didn’t back down from a challenge. No matter the position, or size, he was ready to do battle.

Isaiah Stephens, LB, Northside (VA): With only one speed, the 6-3 and 170-pound sophomore had his foot on the pedal from start to finish. He never ran out of gas.

Layne Daniel, OL, Sherman (WV): The 6-3 and 360-pound junior looked the part. And played the part, too. Marshall appears to be a good fit. Stay tuned for details.

Ian McKinney, OL, Woodrow Wilson (WV): Appalachian State and Davidson have kept tabs on the 6-4 and 300-pound sophomore and other programs figure to follow suit.

Justin Hawk, OL, Goochland (VA): The 6-4 and 250-pound junior held his own, so did Carson Cox from Colonial Heights (VA) and Kyle Hess from Amelia County (VA).

Jesse Wilcox, DL, Capital (WV): Regardless of position, the 6-4 and 240-pound junior might’ve possessed the most upside. Louisville and Purdue have reached out.

Christian Phaby, DL, Wilson Hunt (NC): No stranger to the environment, the 6-1 and 248-pound junior excelled for the second time in as many years. Sky’s the limit for him.