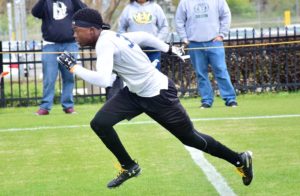 Back in a familiar setting, training camp for the Washington Redskins brought to the masses by Bon Secours was the site for the Blue-Grey All-American Combine (Mid-Atlantic Regional).

With a recognizable staff, including NFL veterans Billy McMullen, Tavon Mason, Billy Parsons and Giavanni Ruffin, there was no denying the professional look and feel of the entire workout.

In the end, naturally, the biggest beneficiaries were the prospects who participated. That said, here’s some much-needed insight on several individuals who left a lasting impression.

Mason Cox, QB, Porter Ridge (NC): The 6-foot-1 and 210-pound junior visited Appalachian State and Davidson in the not so distant past. That’s a good start, one not many can boast about.

Chris Price, QB, Landstown (VA): The 6-foot-1 and 180-pound junior is a target of multiple teams in the Patriot League, specifically speaking Georgetown.

Cristian Ferguson, RB, Appomattox County (VA): Virginia and Virginia Tech both appear to have some varied levels of interest in the 5-10 and 205-pound junior.

Kahorie Batten, RB, Surry County (VA): Elusive and speedy, the 5-10 and 165-pound junior made more than a few people miss and ran away from the rest.

Antonio Wright, RB, Melbourne (FL): On the ground, or in the air, the 5-9 and 165-pound sophomore did a little bit of everything. Most of it extremely well, too.

Noah Robinson, WR, Louisa County (VA): With multiple scholarships in place, now it seems that the ACC is coming on strong for the 6-3 and 180-pound junior.

Jamel Johnson, WR, Highland Springs (VA): The 5-10 and 160-pound junior is firmly on the radar of programs such as James Madison and Norfolk State.

Tyler Johnson, TE, Glen Allen (VA): Versatile, also capable of lining up on the defensive line, the 6-5 and 220-pound junior made the most of his opportunity.

Ian McKinney, OL, Wilson (WV): Davidson and Old Dominion have their sights set on the 6-4 and 300-pound junior. The next move will be interesting, safe to say.

Andrew Nickens, OL, Chancellor (VA): With a visit to Virginia on his resume, the journey is going in the right direction for the 6-3 and 286-pound sophomore.

Tommy Gardner, OL, Lafayette (VA): The 6-4 and 325-pound sophomore seems to have options, with Ohio State and Virginia among the many possibilities.

Cole Holtz, OL, Freeman (VA): The 6-2 and 250-pound junior was a force to deal with down deep in the trenches, as was Michael Perry from Stafford (VA).

Jaelin Montgomery, OL, Prince George (VA): The 6-3 and 295-pound sophomore held his own. Same thing can be said for John Kelley from Glen Allen (VA).

Armani Hoffman, DB, Culpeper (VA): The 6-1 and 180-pound junior certainly passed the eye test. Then, once out on the field, he impressed even more.

Brandon Davis, LB, Halifax County (VA): The 6-2 and 210-pound junior made plays all over, regardless of whether it was the backfield, or second level.

Aaron Aponte, LB, Louisa County (VA): Eager to prove he belonged on the big stage, the spotlight was not too bright for the 6-3 and 214-pound junior.

Jake Rombach, LB, Abermarle (VA): There was plenty to like about the 6-2 and 200-pound junior, rest assured. He seems destined to play on Saturdays.

Marquise Brunson, DL, Princess Anne (VA): The 6-3 and 270-pound sophomore was a man among boys and 20-plus offers by the time he’s a senior is a possibility.

Stephen Castle, DL, Hanover (VA): Big and strong, also somewhat surprisingly athletic of his size, all eyes were on the 6-5 and 225-pound sophomore.

Michael Turner, DL, Hedgesville (WV): The 6-2 and 270-pound junior had a nasty streak about him. That’s never a bad thing for someone at his spot.

Thor Hanlon, DL, Courtland (VA): The 6-2 and 212-pound junior caught the attention of a handful of coaches, along with Crockett Wade from Parkersburg (WV).