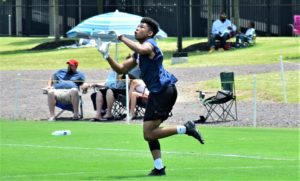 No stranger to the setting, or environment for that matter, the training center for the Washington Redskins again served as host for the Blue-Grey All-American Bowl (Mid-Atlantic Super).

Similar to year’s past as well, NFL veteran trainer Rodney Beasley was the lead instructor and joined by the likes of NFL veterans Billy McMullen, Mark Parsons and Giavanni Ruffin.

In the end, the biggest winners were likely the prospects themselves. Accordingly, it’s time to provide a bit of insight about the individuals who left last impression on the coaching staff.

Cameron Mayes, QB, Walsh Jesuit (OH): The 6-1 and 185-pound senior stood out in a crowd. He is a target of teams in the Pioneer Football League, with an offer from Valparaiso

Micah Beard, QB, Northern Virginia (VA): Alabama-Birmingham and Samford are a few fans of the 6-foot and 190-pound senior, apparently. An offer could soon materialize.

Chris Price, QB, Landstown (VA): With programs from Patriot League recently paying close attention, the future appears to be bright for the 6-foot-1 and 180-pound senior.

Stanley Hill, RB, Strom Thurmond (SC): The 5-7 and 160-pound senior made plays, as did Diallo Mitchell from Huntington (WV) and Mark Shelton from Mountain View (VA).

Jalen Smith, WR, Trinity Episcopal (VA): The 5-8 and 160-pound senior has been on contact with James Madison and Kent State, among others. Keep an eye on him.

Myles Coble, WR, Athens Drive (NC): James Madison and Old Dominion seem to have the 6-1 and 182-pound senior on the radar. The situation is worth monitoring.

Matthew Spencer, WR, Victory Christian (NC): The 6-2 and 186-pound senior was a big target and difficult to deal with throughout, especially down in the red zone.

Corey Chapman, DB, Hickory (VA): The 5-9 and 170-pound senior could end up with a team in Conference USA, and worth noting, Old Dominion is an option.

Elijah Hawks, DB, Fork Union Military Academy (VA): Coming from a good school on the prep circuit, the 5-10 and 170-pound senior delivered results. As expected, too.

Elic Haddock, LB, L.H. Rose (NC): Western Carolina is in the mix for the 5-11 and 220-pound senior. It’s only a matter of time before other teams jump on the bandwagon.

Judson Hogeland, LB, Bessemer Academy (AL): Middle Tennessee State and Memphis are just a couple of the potential landing spots for the 6-1 and 200-pound senior.

Cole Bishop, LB, Starrs Mill (GA): In time, the 6-2 and 190-pound junior might be best of the bunch. Appalachian State, Jacksonville State and Kennesaw State reached out. 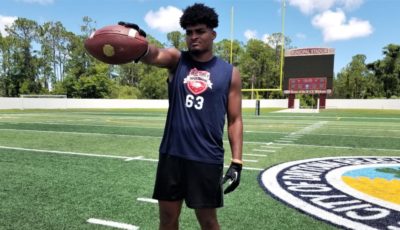