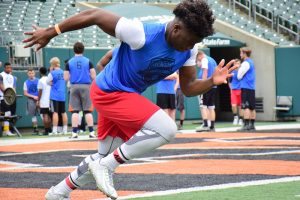 Mid-American Conference target Devon Rivers was one of the more recognizable names on hand at the Blue-Grey All-American Combine in Cincinnati (OH). (Photo courtesy of Clark Sports Media)

Given the backdrop, with Cincinnati Bengals’ Paul Brown Stadium playing host, there was plenty of hype surrounding the Blue-Grey All-American Combine (Midwest Regional).

No surprise, many of the region’s top prospects were in attendance for the workout. So many of them, in fact, the turnout of talent surpassed the expectations beforehand.

That said, after putting together plenty of notes from the morning and afternoon session, thanks to help from NFL veteran trainer Reggie Young, what follows is a few of the highlights.

Also worth mentioning, over the course of the next couple days, multiple individuals will most likely be added to the list below. In the meantime, let’s go ahead and get things started.

Lance Lambert, QB, West Jefferson (OH): With a couple of visits already under his belt, including nearby Miami (OH), the 6-foot-1 and 185-pound junior is on the right track.

Isaiah Healy, QB, Westerville Central (OH): The 6-foot and 185-pound junior was fearless in the pocket, and when needed, made a majority of throws on the run appear effortless.

Chris Payne, RB, St. Xavier (OH): The 6-1 and 204-pound sophomore could be a force to be reckon with right around this time next year. We would not be the least bit surprised, either.

Mershawn Rice, WR, Reynolsburg (OH): With offers from both Cincinnati and Kentucky, the 6-3 and 200-pound sophomore is on his way. Notre Dame and Ohio State are interested, too.

Wyatt Fischer, WR, Western Brown (OH): On the official roster, the 6-1 and 190-pound junior was contacted by Miami (OH) and Toledo. A preferred walk-on at Ohio State might be in play.

Savon Mitchell, WR, Harvest Prep (OH): The 6-2 and 155-pound junior looked the part. And played the part. Eastern Michigan and Ohio are close to jumping on the bandwagon.

Gatlin Humphrey, TE, Apollo (KY): A big target, never more so than down around the red zone, the 6-3 and 235-pound junior seemingly caught everything thrown in his direction.

Ibrahim Sesay, DB, Whetstone (OH): The 5-10 and 167-pound junior can do it all. Perhaps that explains why Akron and Ball State have kept the lines of communication open with him.

Michael Edwards, DB, Central Catholic (OH): Bowling Green, among other schools, is an apparent fan of the 5-9 and 175-pound junior. Safe to say, moving forward, the future is bright.

Connor Newhouse, DB, North Oldham (KY): The 5-10 and 176-pound sophomore is, just now, starting to figure things out. Only a matter of time before he puts it all together.

Lane Cullums, LB, Meigs (OH): The 6-foot and 200-pound junior has received some of the best coaching in the Buckeye State, of course, under the guidance of NFL veteran Mike Bartrum.

Isaiah Savitt, LB, Twinsburg (OH): The 5-10 and 195-pound sophomore has plenty of upside, that was apparent during skills testing. It was more of the same when one-on-ones started.

Jermain Snodgrass, LB, Wheeling Park (WV): Undersized by some standards, right or wrong, what the 5-8 and 193-pound sophomore lacks in measurements, he makes up for with heart.

Jalen Bradley, OL, Walnut Ridge (OH): The 6-3 and 250-pound sophomore appears to be a natural fit at center. Cincinnati is well aware of that fact and could offer down the road.

Daniel Frederick, OL, Bourbon County (KY): What jumps out first is, naturally, his frame. Still, the 6-4 and 308-pound sophomore moves well for that size. He’s only going to get better.

Jarrod Hufford, OL, Licking Valley (OH): The 6-4 and 290-pound sophomore was part of the major youth movement in this setting.  Like his peers, he went out and got the job done.

Ethan Walker, OL, Vincent (OH): The elder statesman of the group, so to speak, the 6-2 and 280-pound junior did what was expected and his experience played a major role in that.

Chad Douglas, DL, Columbus Independence (OH): Akron and Toledo seem to be on the bandwagon of the 6-1 and 285-pound junior. Rightfully so after the effort in this environment.

Kameron Kiesel, DL, DuPont Manual (KY): The 6-3 and 210-pound sophomore has not hit his growth spurt yet. No wonder Miami (OH) is keeping a close eye on his development.