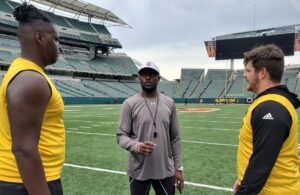 NFL veteran trainers Rodney Beasley, Reggie Young and John Holman were instructors during the workout and each of them came away impressed with the collection of talent on hand.

There were many scholarship-worthy prospects in attendance and many of them can now be considered as a possible All-American Bowl candidate for one of the upcoming games later on this year.

Noah Spencer, QB, 2022, Kings (OH): The 6-foot-3 and 220-pounder is on the radar of Akron and Cincinnati, among others. Watch out, offers could materialize sooner, rather than later.

Adam Diaz, QB, 2022, Shaker Heights (OH): Dayton and Eastern Kentucky seem to have their sights on the 6-foot and 182-pounder. The situation is worth monitoring, too.

Seth Borondy, RB, 2022, Bellbrook (OH): Given his well-rounded skill set in the run and passing game, the 6-2 and 180-pounder could land with a school such as Ball State.

Blake Guffey, WR, 2022, Trimble (OH): Akron reached out to the 6-1 and 190-pounder in the recent past. It would not be a surprise to see other MAC schools doing the same thing.

Luke Rudolph, WR, 2023, Pine Richland (PA): Not intimidated by the big stage, the 5-9 and 165-pounder delivered results. Eli Early from Owensboro (KY) was in a similar category.

Maxwell Wentz, OL, 2022, Huntington (WV): A center, the 6-5 and 275-pounder has a handful of offers in place and the total just might reach double digits in the near future.

Kameron Wright, OL, 2022, Granville (OH): Bowling Green and Toledo have both seen something they like in the 6-4 and 275-pounder. Rightfully so after his effort in this setting.

Rahzik Crutcher, OL, 2022, Findlay (OH): No doubt about it, the 6-9 and 310-pounder passed the eye test. Equally impressive, he proved to be more than just a big body.

Peyton Dietz, OL, 2022, Covington Catholic (KY): A center, the 6-4 and 305-pounder has communicated with the likes of Butler and Valparaiso. He’s destined to play at the next level.

Quentin Duffy, OL, 2022, Lexington Catholic (KY): Murray State could be the future home for the 6-2 and 300-pounder. Only time will tell. Regardless, he’s an undeniable talent.

Travis Owen, OL, 2022, Black Rover (OH): The 6-3 and 265-pounder did not get lost in the shuffle, he made a statement, along with Noah Smith from Landmark Christian (OH).

Mo Conteh, DB, 2022, Eastmoor Academy (OH): Always up for a challenge, never one to back down, the 6-foot and 175-pounder shutdown one side of the field, with regularity too.

Micah Parmes, DB, 2022, North Hardin (KY): The 5-11 and 170-pounder has talked with Lehigh and Penn. Also worth noting, Air Force and Kentucky just might be in the mix.

Pierce Humpich, LB, 2022, Eastern (KY): The 6-3 and 210-pounder has offers from several different schools, with Murray State having the inside track now, or so it appears.

Tayleon Waterhouse, LB, 2022, Ponitz (OH): Akron could emerge as potential suitor for the 6-3 and 192-pounder. If so, the Zips will likely be the first of many to entertain him.

Dearis Thomas, LB, 2022, Naples (FL): The 6-1 and 215-pounder has built up a relatively decent rapport with Cincinnati and Miami Ohio, to name a couple of programs.

Xavier Perkins, DL, 2023, Berkeley Prep (FL): Forget about class distinction, the 6-4 and 205-pounder might’ve been the best of this entire bench. Maryland and Pitt are targets.

Also, most combine participants at the recent All-American Combine will soon be provided with additional details, along with an exclusive membership to the invite-only Red Zone Prospects (click here). 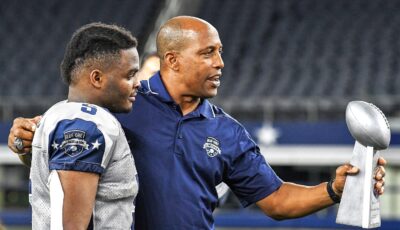