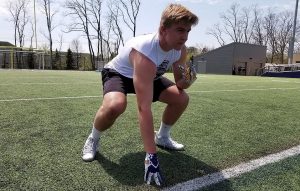 Mid-American Conference target Billy Riviere was among the prospects at the Blue-Grey All-American Combine (Minnesota Regional).

Each, and every time, with this being third time in as many years, the Blue-Grey All-American Combine (Minnesota Regional) delivered on lofty expectations.

With NFL veteran trainer Reggie Young as lead instructor, there were a handful of individuals that turned heads. Accordingly, here’s a look at the best of the best.

Brandon Hokkanen, QB, Mound Westonka (MN): The 6-foot-3 and 185-pound junior planned to attend the event, but was unable to participate in the workout. Sawyer Otto from Tracy-Milroy-Balaton (MN) did particularly well in his absence.

Samahjay Hitchcock, RB, Osseo (MN): With an imposing presence, the 5-10 and 200-pound junior also proved he had more than enough athleticism.

Julian Cavin, WR, Providence Academy (MN): In the running for Offensive MVP, the 6-foot and 179-pound junior has talked with Iowa and Minnesota

Anthony Weldon, WR, Roseville Area (MN): The 6-foot and 180-pound junior played bigger than his listed height and weight. His name is one to remember.

Billy Riviere, TE, Wayzata (MN): In a class all his own, Eastern Michigan and North Dakota have offered the 6-4 and 235-pound junior. Others will soon follow suit.

Kyler Fisher, DB, Southeast Valley (IA): Iowa State has already been in contact with the 6-foot and 190-pound junior and the bandwagon just might fill up fast.

Carson Reinard, LB, Chanhassen (MN): The 6-1 and 195-pound junior received all the reps he could possible handle, as did Wyatt Craft from St. Mary’s (MN).

Dalton Schmidt, OL, Fort Dodge (IA): Iowa State was a recent trip for the 6-5 and 280-pound junior and it’s reasonable to think that added visits are in the works.

James Johnson, OL, Minnetonka (MN): On the radar of several teams the 6-4 and 290-pound junior made life difficult for multiple opponents in this setting.

Andrey Garbisch, DL, De La Salle (MN): The 6-3 and 255-pound sophomore is on the radar of North Dakota and South Dakota, to name a couple of the many interested.

Joseph Stransky, DL, Owatonna (MN): About as strong as they come, the 6-2 and 245-pound junior took advantage of the opportunity and performed well on the big stage.

Kaleb West, DL, Cedar Rapids Prairie (IA): Injured, though not seriously, the 6-2 and 310-pound junior was determined to battle. Western Illinois and Northern Iowa are interested.