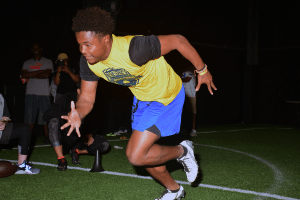 ACC target Derick Lawrence was one of many well-known names at the Blue-Grey All-American Combine in Greensboro (NC). (Photo courtesy of Clark Sports Media)

No surprise, given the the collective experience of the group, the workout in Greensboro (NC) lived up to all of the advanced hype. The prospects in attendance, naturally, were the primary beneficiaries as the instruction received was second to none.

After talking with one-time professional coaching staff, there were a number of different recruits who left a lasting impression on the powers that be. That said, what follows is a closer look at some of those individuals, along with a bit of insight on each one.

Xeaiver Bullock, QB, E.E. Smith (NC): The 6-foot and 172-pound junior made just about every throw required to seemingly impress most onlookers. It was a job well done.

Dillan Davis, QB, West Iredell (NC): No slouch, the 6-foot and and 175-pound junior was not phased in the least bit, regardless of the task put in front of him.

Kevin Harris RB, Bradwell Institute (GA): The 6-foot and 205-pound sophomore possessed plenty of upside, perhaps more so than anyone at the workout.

Mason Burchette, RB, East Davidson (NC): The 5-11 and 205-pound junior is by, most accounts, more of a fullback. Regardless, he proved capable of carrying the load.

Roger Jackson, RB, Knightdale (NC): The 5-8 and 190-pound sophomore went out and commanded attention, so did his peer Tristan Somerville from Freedom (NC):

Derick Lawrence, WR Central Gwinnett (GA): Georgia Southern has expressed interest in the 5-9 and 160-pound junior. Indiana and Virginia Tech are also in the mix.

Grant Thompson, WR, Ashe County (NC): The 6-2 and 190-pound junior has been in contact with teams in the Big South Conference, specifically speaking Coastal Carolina.

Luke Burnette, TE, Sun Valley (NC): On the official roster, the 6-5 and 240-pound junior was not on hand. Still, plans are in the work for him to attend a different workout.

Chris Foster, DB, Northern Guilford (NC): The 5-8 and 160-pound junior has been a target of the Colonial Athletic Association and already boasts a visit to James Madison.

Tae Randolph, DB, Tarboro (NC): The 6-1 and 175-pound junior talked with teams in the American Athletic Conference and East Carolina is a fan of his.

Miles Simon, DB, Hibriten (NC): With a frame that most colleges covet, the 6-1 and 186-pound junior did little, or nothing, to tarnish his growing reputation.

Kyle Hill, DB, Southside (NC): The 5-9 and 173-pound junior had chip on his shoulder, and by day’s end, he would not be denied of some well-deserved recognition.

Trey Thomas, DB, South Aiken (NC): Fast and physical, the 5-9 and 151-pound junior took on all opponents. Same can be said about Josh Faulkner from Central Cabarrus (NC).

Phillip Willoughby, LB, Tarboro (NC): With his best work done in the middle, 6-foot and 207-pound junior has talked in the past with East Carolina and North Carolina State.

Dantevian Byrd, LB, North Mecklenburg (NC): South Carolina State is among the many teams that have done a good job of keeping tabs on the 6-1 and 205-pound junior.

Marvante Beasley, LB, Orange (NC): The 6-foot and 185-pound junior did rather well in this environment, particularly during the skills testing. He’s one to watch.

Chase McPherson, OL, Apex Friendship (NC): The 6-4 and 255-pound can play center, and accordingly, schools from the Pioneer Football League have reached out.

Justin Fortune, OL, Freedom (NC): The 6-3 and 252-pound junior displayed somewhat surprising athleticism, and in doing so, turned more than a few heads in this setting.

E’Kwon White, DL, Franklinton (NC): Conference USA, notably North Carolina Charlotte, appear to see something in the 6-1 and 215-pound junior. Keep an eye on him.

Landon Van Dyke, DL, East Gaston (NC): The 6-4 and 276-pound junior held his own down in the trenches. No doubt about it, the coaching staff liked what he did.