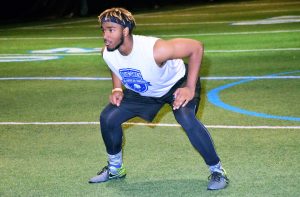 Southern Conference target Reuben Palmer was among the prospects in attendance at the Blue-Grey All-American Combine (North Carolina Regional).

No surprise, given the the collective experience of the group, the prospects in attendance, naturally, were the primary beneficiaries as the instruction they received was second to none.

After talking with one-time professional coaching staff, what follows is a closer look at some of the individuals that managed to make an impact, along with a bit of insight on each one.

Gabriel Hollingsworth, QB, Ronald Reagan (NC): The 6-foot-3 and 200-pound sophomore did well in this setting, and no surprise, was on campus at Wake Forest in the past.

Brady Stiltner, QB, Patrick Henry (VA): The 6-foot and 185-pound junior comes from a program with a good pedigree and had no problem adjusting to the environment.

C.J. Hayden, RB, Freedom (NC): Not his first time around, the 5-10 and 170-pound junior experienced success during the workout for the second time in as many years.

DuRon King, RB, Morehead (NC): The 5-9 and 175-pound junior did a little bit of everything. Most of it extremely well, that is, whether it was running or catching the ball.

Andrew Thomas, RB, Middleburg (FL): The 5-10 and 170-pound junior opened up some eyes and the same thing can be said about Zach Brown from Patrick Henry (VA).

Jalen Faison, WR, James Kenan (NC): Based on size alone, the 6-3 and 180-pound junior is an interesting prospect, along with Matthew McIntyre from Millbrook (NC).

Brandon Cray, WR, Clayton (NC): On paper, he was inexperienced. On the field, it was a different story for the 5-9 and 155-pound freshman with interest from UMass.

Kendall Karr, TE, Stuart Cramer (NC): The 6-4 and 220-pound sophomore was another underclassman to watch. Appalachian State is one of the school that’s reached out.

Luca Lutzel, DB, Southlake Christian Academy (NC): The 6-foot and 155-pound sophomore attended camps at Baylor and North Carolina in the not so distant past.

Cameron Maddox, DB, Sun Valley (NC): Make no mistake about it, the 6-2 and 175-pound junior has a frame that coaches and scouts covet at the next level. Stay tuned.

Jamaud Geter, DB, Crest (NC): UNC Charlotte is on the bandwagon of the 5-9 and 175-pound junior, who missed the workout but plans to attend an upcoming event

Isaiah Johnson, DB, Bluefield (WV): Forget about the fact the 6-foot and 170-pound is a freshman, a majority of the time he played with the poise of an upperclassman.

Keith Mosely, LB, Asheville (NC): Injured, nothing major, more cautious than anything else, the 5-11 and 205-pound junior has talked with Appalachian State, among others.

Jayden Jerkins, LB, Apex (NC): A target of UMass, among others, the 6-1 and 220-pound junior grabbed the attention of many and the focused remained on him.

Chase Barber, LB, Bishop McGuinness Catholic (NC): Never one to back down, the 6-1 and 205-pound junior handled business, as did Elijah Richardson from Garinger (NC).

Noah Berryman, LB, Mount Pleasant (NC): The 5-9 and 200-pound junior made thing happen at the second level, along with David Arukwe from Leesville Road (NC).

Billy Hambrook, OL, Charlotte Catholic (NC): The 6-2 and 265-pound junior has an offer from Coastal Carolina and other figures to follow suit. Sooner, rather than later.

David Sawyer, OL, Rose (NC): The 6-6 and 280-pound junior visited nearby North Carolina no long ago and a return trip to Chapel Hill could be in the works down the road.

Jacob Gates, OL, Ragsdale (NC): The 6-4 and 270-pound junior had a motor that seemingly did not stop. It was one gear throughout. All gas and no brakes.

Brayden Monday, DL, Tuscola (NC): Teams from within the Colonial Athletic Association and Southern Conference have reached out to the 6-4 and 241-pound junior.

Katrel Shaw, DL, Mallard Creek (NC): The 6-2 and 300-pound junior is somewhat familiar with members of the coaching staff from Old Dominion. Details to follow.

Gabe Sesco, DL, Graham (VA): With his kind of frame, either you have it or don’t, there’s certainly plenty to work with when it comes to the 6-7 and 257-pound junior.

Devin Rushing, DL, Central (SC): No slouch, the 6-4 and 310-pound junior was a force to be reckon with most times, as was Mitchael Cook from Floyd County (VA).