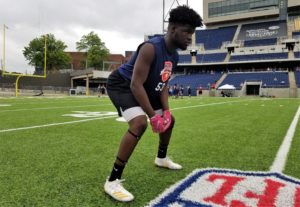 Mid-American Conference target Jalil Lenore was among the participants at the Blue-Grey All-American Combine (Northeast Super).

There’s no question about it, few would argue otherwise, Pro Football Hall of Fame in Canton (OH) was the ideal setting for the Blue-Grey All-American Combine (Northeast Super).

What follows, without any further delay, is a closer look at the many prospects in attendance who left a lasting impression on the powers that be. Specifically speaking, McMillian & Co.

Hayden Austin, QB, Reynoldsburg (OH): The 6-foot-3 and 185-pound junior seems to have the tools to make a difference for multiple programs in college. Perhaps right away, too.

Michael DiGioia, RB, Schaumburg (IL): Speed, strength and stamina, the 5-8 and 183-pound junior has it all. Same goes for Jeremy Schooler from Belleville East (OH).

Peyton Smith, RB, Walton Verona (KY): The 5-11 and 175-pound senior did just about everything the coaches asked of him, as did Will Todd from Chesapeake (OH).

Lane Ruby, WR, Southeastern (OH): Lehigh and Penn are a couple of possible destinations for the 5-9 and 170-pound senior. Other schools figure to follow suit.

Zyier Yates, WR, Caverna (KY): Over the middle, along the sideline, down the field, the 6-1 and 190-pound senior caught anything and everything in his vicinity.

Nathan Havrda, OL, Houston (TN): Big and strong, somewhat surprisingly athletic as well, the 6-4 and 275-pound senior was in a class all his own, most times.

Wilson Clark, OL, Ralston Valley (CO): In terms of upside, few have as much as the 6-5 and 270-pound junior, who could be a good fit in the Big Sky Conference.

Andrew Jarvis, OL, Piper (KS): A potential landing spot for the 6-5 and 285-pound junior could be in the Mountain West Conference, possibly the Big 12 Conference.

Carter Doucet, DB, The Woodlands (TX): A target of teams in the Southland Conference, with Abilene Christian at the top, the 5-11 and 180-pound senior earned respect.

Zane Sorensen, DB, University (IL): Staying nearby for school, somewhere in the Missouri Valley Football Conference, just might work for the 6-foot and 175-pound senior.

Jalil Lenore, LB, Bremen (IL): Regardless of position, the 6-2 and 200-pound senior might have been best of the bunch. Northern Illinois and Southern Illinois are interested.

Andrew Mays, LB, Henry Country (KY): Running backs and tight ends, the occasional receiver also, the 5-10 and 185-pound senior was up for any, and all, challenges.

Jeremiah Pittman, DL, Saint Viator (IL): When all is said and done, the 6-2 and 255-pound junior could end up having plenty of options to choose from at the next level.

Theodore Bruns, DL, Bethlehem (KY): The 6-4 and 240-pound senior looked the part and played the part. Ian Joyce from Trimble (OH) fell in the same kind of category.