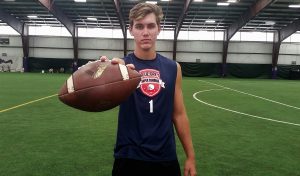 Colorado commit Blake Stenstrom was, without question, the marquee name at the Blue-Grey All-American Combine in Denver (CO).

Back again, due in large part to popular demand from this region of the country, the Blue-Grey All-American Combine (Rocky Mountain Super) made a highly-anticipated return to Denver (CO).

Once there, the brand’s staff of NFL veterans, including the likes of Mark McMillian, Byron Evans, Jerome Daniels, George Martinez and Sean White, worked with the individuals.

There was no shortage of talent, either. Many high-profile prospects in attendance delivered the desired results. Good thing is, same thing can be said for several under-the-radar recruits.

Accordingly, what follows is closer look at those who were able to leave a lasting impression on the powers that be, naturally the one-time professional instructors, as well as the collective staff.

Blake Stenstrom, QB, Valor Christian (CO): A Colorado commit, the 6-foot-4 and 200-pound senior lived up to the hype and will soon play in the brand’s All-American Bowl.

Brayden Hawkins, QB, Myers Park (NC): The 6-3 and 215-pound senior made the workout roster, but unfortunately, was unable to attend. He remains on the radar.

Cole Thomas, RB, Troy (CA): A target of the Big Sky Conference, with Sacramento State in the mix, the 5-10 and 170-pound senior made the most of his opportunities.

David Moore, RB, Pine Creek (CO): A name to remember, you heard it here first, the 5-8 and 165-pound sophomore certainly has a bright future ahead of him.

Keith Wesley, WR, Higley (AZ): The 6-2 and 185-pound senior has been contacted by multiple teams from the Pac-12 Conference. Rightfully so with his skill set.

Jackson Groff, WR, Northwest Christian (AZ): With a potential destination looking like somewhere in the Big Sky Conference, the 5-10 and 180-pound senior did well.

Ricky Pearsall, WR, Corona del Sol (AZ): Forget about the fact that the 6-foot and 185-pound junior was an underclassman, he still shined in the spotlight.

Elijah Johnson, WR, Verrado (AZ): The 5-8 and 165-pound senior appears to have what it takes to play at the next level. Now, all it takes is focus and follow through.

Bennett Folkers, WR, Gothenburg (NE): A reliable target, the 6-3 and 185-pound senior went out and handled business, along with Jonathan Caling from Arroyo (CA).

William Burton, TE, Granite Hills (CA): The 6-5 and 235-pound senior has been on contact with the likes of Oregon State and Utah, among many other schools.

Joseph Golden, TE, Doherty (CO): With an imposing type of presence, the 6-6 and 225-pound senior commanded attentions, as did Bradon Golon from Niwot (CO)

Malique McKay, DB, Vista Ridge (CO): The 5-10 and 165-pound senior was the best player at his position and proceeded to shutdown more than a few opponents.

Kevin McCray, DB, Sierra Vista (NV): With what appears to be prototypical size for his spot on the field, the 6-2 and 190-pound senior has plenty of upside.

Hunter Sims, DB, Oak Grove (AL): The 5-11 and 155-pound senior did the dirty work, and thus, endeared himself to the coaching staff, particularly McMillian.

Mikhail Sands, DB, Prairie View (CO): Determined, never one to settle for anything less than the best, the 5-8 and 150-pound senior was an inspiration to many.

Carl Odom, LB, West Jordan (UT): The 6-2 and 205-pound senior is on the radar of several schools in the Mountain West Conference. An offer could emerge soon.

Larry Davis, LB, Desert Vista (AZ): Colorado State and UTEP are a couple of the programs who have reached out to the 6-foot and 220-pound senior in the past.

Jag Robinson, LB, Langham Creek (TX): The 6-foot and 225-pound senior seems to have his sights set on the American Athletic Conference, with Tulane being a good fit.

Trent Shedd, LB, Corner (AL): A Southern Conference target, the 6-foot and 200-pound senior looked the part. And played the part, too. Keep an eye on him.

Conner Christoffersen, LB, Park City (UT): The 6-2 and 195-pound senior had something to prove. Jared Haggard from Dobson (AZ) is in the same category.

Isaiah Savitt, LB, Twinsburg (OH): The 5-11 and 190-pound junior has started to realize some of his potential. A short year, or two, from now, watch out for him.

Kylan Martinez, OL, Bear Creek (CO): Northern Colorado has kept a watchful eye on the 6-3 and 240-pound senior and staying close to home might be an option.

Jacob Fyffe, OL, Centennial (AZ): The 6-3 and 290-pound junior, on paper, appeared to be inexperienced. He played with the poise of an upperclassman, however.

Carson Keltner, OL, Centennial (AZ): Versatile, and capable of lining up at center, the 6-2 and 270-pound junior helped to strengthen a growing reputation.

Linaudre Schwallie, DL, Silverado (NV): With a motor that did not stop, his foot was on the gas from start to finish, the 6-2 and 265-pound senior earned respect.

King Kyler Fanene, DL, Shadow Ridge (AZ): The 6-2 and 335-pound senior caused plenty of problems on the inside. No one, in fact, figured out a way to stop him.