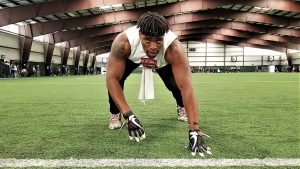 Big Sky Conference DeOnte Washington was among the prospects at the Blue-Grey All-American (Rocky Mountain Super).

For the second time in as many years, the Blue-Grey All-American Combine (Rocky Mountain Super) had its share of well-known names in attendance and hidden-gem types.

What follows is much-needed insight about those on hand who, when all was said and done, left a lasting impression on the powers that be. The coaching staff in place, naturally.

Keegan Tharp, QB, Coronado (NV): The 6-foot-3 and 190-pound junior has talked with the likes of Northern Arizona and Southern Utah in the not so distant past.

Matthew Jones, QB, Central Davidson (NC): The 6-3 and 185-pound junior has plenty of upside, and naturally, his skill set was on display in this environment.

Gavin Herberg, QB, Pine Creek (CO): The 6-foot and 175-pound junior was about as athletic as they come. Dylan Hayden from Thunder Basin (WY) also did well.

Seth Davis, RB, El Dorado (TX): Waiting in the wings for a while now, the time has come for the 5-9 and 190-pound senior to step to the forefront. He’s ready, too.

Bryce Wilson, RB, Hamilton (IL): Not many around are stronger than the 5-7 and 215-pound senior, who’s more of a fullback type. There’s a lot to like about him.

Noah Smith, RB, Lincoln County (NV): The 6-2 and 180-pound senior was a bigger and effective back. Vincen Wagner from Trevor Browne (AZ) was in a similar category.

Dylan James, WR, Eaglecrest (CO): The 5-9 and 165-pound senior was difficult to deal with and will most likely be a good fit with a team from the Big Sky Conference.

Drelyn Carroll, WR, Schlagle (KS): Regardless of the opponent, the 6-3 and 170-pound senior delivered results. No surprise, he’s been in contact with Missouri State.

Billy Conaway, WR, Shawnee Mission North (KS): The 6-foot 190-pound senior has been a Missouri Valley Conference target and was on campus with Kansas State.

Cory Carignan, WR, Arvada West (CO): The 5-10 and 170-pound senior gave defenders fits throughout and North Colorado might be a potential landing spot for him.

Teven McKelvey, WR, Gardner-Edgerton (KS): With a high ceiling, the 6-1 and 177-pound junior was not afraid of the big stage and shined while in the spotlight.

Jacob Lozinski, WR, Berthoud (CO): The 6-foot and 185-pound held his own, so did Gabriel Stonewall from Franklin (TX) and Matheu Sands from Prairie View (CO).

Gabriel Sandoval, TE, Elkins (TX): The 6-3 and 245-pound senior showed several flashes during the one-on-ones, along with his peer Chase Lantto from Peyton (CO).

Trey Vaval, DB, Blue Springs South (MO): South Dakota and North Dakota are apparent fans of the 6-foot and 150-pound senior. Rightfully so after the effort in this setting.

George Bowers, DB, Grace Brethren (CA): The 5-10 and 155-pound junior is on the verge of big things, as Mountain West Conference programs have kept an eye on him.

Marques Sigle, DB, Omaha North (NE): The 5-11 and 160-pound junior was able to shutdown more than a few of his counterparts over the course of the workout.

Ethan Carson, LB, Bishop Manogue (NC): The 6-2 and 230-pound had a motor that did not stop. He had one gear only, and of course, that was full-speed ahead.

Kaden Bretzing, OL, Timpanogos (UT): A center, the 6-2 and 285-pound senior turned heads on several occasions. The coaching staff was pleased with his effort.

Dustin Burgett, OL, Lyons Decatur (NE): A center, the 6-1 and 250-pound senior made the difficult tasks seem easy. He’s a natural when it comes to life on the interior.

Jacob Tafoya, OL, La Junta (CO): The 6-2 and 313-pound senior was a force to be reckon with in the trenches, as was John Mason Hitt from Brazos Christian (TX).

DeOnte Washington, DL, Vista Ridge (CO): No question about things, the 6-2 and 253-pound senior was without peer. Accordingly, he has an offer from Northern Colorado.

Patrick Harris, DL, St. Mary’s (MO): The 6-foot and 205-pound junior, who appears to be in the midst of a growth spurt, has potential to be an impact player at the next level.

Max Cook, DL, Macon (MO): The 6-4 and 240-pound was a load, with Hunter Paxton from Sterling from (CO), Kody McPherson from Empire (AZ) and Keith Alvarado from Eldorado (NM).