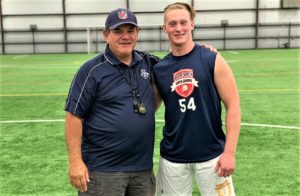 Back once again, for the third time in as many years in fact, there was no surprise when it comes to the talented turnout at the Blue-Grey All-American Combine (Rocky Mountain Super).

NFL assistant coach George Martinez was lead instructor, and similar to the recent past, the one-time member of the Raiders and Cardinals passed along his knowledge of the game.

After some careful consideration, here’s a much closer look at the many individuals who left a lasting impression on the coaching staff, as well as the band’s administrators.

Spencer Peterson, RB, Pine Creek (CO): A target of teams in the Mountain West Conference, the 6-foot and 195-pound senior did nothing to tarnish a growing reputation.

Joshua Norman, WR, Vista Ridge (CO): The 5-10 and 175-pound senior did a everything, most of it well, whether it was over the middle, on the sideline or down the field.

Colby Arlington, OL, Erie (CO): A center, the 6-2 and 235-pound senior made the most of his opportunity, with all eyes on him too, and on one of the biggest stages around.

Jordan Richardson, DB, Moon Valley (AZ): An underclassman on paper, the 6-foot and 160-pound junior often played with the poise of an experienced varsity starter.

Devin Antoine, DB, Vista Ridge (CO): With feelers from schools in the Big Sky Conference, among others, the future appears to be bright for the 5-10 and 190-pound senior.

Hayden Stocking, LB, Wasatch (UT): Idaho State or Weber State could be an ideal fit for the 6-foot and 205-pound senior. It’s only a matter of time before he’s on the radar.

Delonte Dickey, LB, Cherry Creek (CO): The 6-3 and 205-pound senior has been contacted by the likes of Boise State and Northern Arizona. An offer just might be next for him.

Emmanuel Taylor, DL, Vista Ridge (CO): The 5-10 and 235-pound junior did well down in the trenches. Still, he might be better suited at backer, and then, come off the edge.