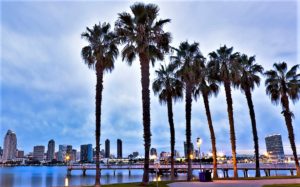 Back once again, this time at a different venue from times before, still true to form, there was plenty of talent at the Blue-Grey All-American Combine (San Diego Regional).

Accordingly, what follows is a much closer look at several individuals who did their best and managed to stand out in the crowd. That said, without further ado, here’s the list.

Gunnar Gray, QB, University City (CA): The 6-foot-4 and 185-pound junior was focused, and with interest from the Big Sky Conference, he strengthened a growing reputation.

Jake Retzlaff, QB, Corona Centennial (CA): On the roster, but not able to attend unfortunately, the 6-1 and 180-pound sophomore plans to work out in the near future.

Delano Green, RB, Arroyo Valley (CA): Nimble, with improving strength, the 5-8 and 170-pound junior has a fair amount of upside. His path appears to be cleared for success.

Tory Horton, WR, Fresno Edison (CA): Fresno State, Nevada and San Jose State first reached out to the 6-2 and 160-pound junior. Colorado and Washington are in the mix, too.

Damani Wilks, WR, Del Sol (NV): The 6-1 and 161-pound junior has communicated with Grambling State and Weber State, among other teams. Keep an eye on him.

Ron Vann, WR, Bonita Vista (CA): The 6-1 and 190-pound junior held his own and then some. No surprise, he’s been in contact with Fresno State and San Diego State.

Herman Smith, DB, Madison (CA): When all is said and done, the 5-10 and 185-pound sophomore could end up being the top prospect at any position on defense.

Josh Fletcher, DB, Ramona (CA): The 5-9 and 170-pound junior was tough as they come, also athletic. By day’s end, he was a favorite of the coaching staff.

Joshua Buchanon, DB, Bonita Vista (CA): With NFL bloodlines, Willie Buchanon is his grandfather, the 5-7 and 150-pound younger version continues to his journey.

Makhi Mitchell, LB, Arroyo Valley (CA): The 6-foot and 175-pound sophomore made a name for himself. Shane Simpson from Troy (CA) also did well in this setting.

Justin Curtis, OL, Hart (CA): The 6-4 and 290-pound sophomore was a man among boys, at times. By the time he’s an upperclassman, watch out. Sky’s the limit for him.

Travis Johnson, DL, Vista Murrieta (CA): The 6-4 and 249-pound junior looked the part and played the part. Seemingly no one was able to stop, or slow him down.

Mandela Tobin, DL, Westview (CA): The 6-3 and 255-pound sophomore did well under pressure. Egor Cleary from Bonita Vista (CA) was in the same category.