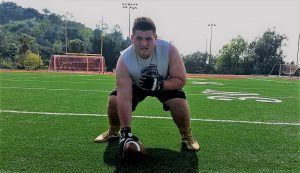 Similar to year’s past, just like clockwork in fact, there was no shortage of talent at the recent Blue-Grey All-American Combine (Southern California Regional) located outside of Los Angeles (CA).

NFL veteran and Alabama alum Mark McMillian, again, was the lead instructor during the workout at his old stomping grounds Glendale Community College. Even he was impressed by day’s end.

What follows is a closer look at several of the prospects who left an impression on the powers that be, specifically speaking, McMillian and his many one-time professional peers in attendance.

Xavier Nix, QB, Lompoc (CA): The 6-foot-2 and 185-pound junior possessed a good frame and had a live arm. With continued improvement, he could draw some legit college interest.

Cole Thomas, RB, Troy (CA): Schools from the Big Sky Conference, most notably Northern Arizona, have contacted the 5-10 and 170-pound junior. Rightfully so after his effort here.

DeVontae Freeman, RB, El Diamante (CA): The 5-11 and 160-pound junior showed burst, also a bit of strength. That’s a good combination, naturally, for a recruit at his spot on the field.

Dominic Wingfield, WR, Servite (CA): Plans were in motion for the 5-9 and 170-pound junior to take part in the workout. Unfortunately, he did not make it, but remains on the radar.

Devonta Bridges, WR, Carter (CA): Still young, and raw for the most part, there’s no denying the fact that the 6-2 and 200-pound sophomore is heading in the right direction. Stay tuned.

Jacob Leftwich, WR, San Marino (CA): The 5-9 and 150-pound sophomore has plenty of upside. Multiple times, for the record, he caught the attention of the entire coaching staff on hand.

Joe Christensen, LB, Servite (OL): Already on the radar of teams from the Mountain West Conference and the Pac-12 Conference, the future is bright for the 6-foot and 215-pound junior.

Alex Benter, LB, Santiago (CA): The 6-4 and 220-pound junior looked the part. He played the part, too. Focused on the task at hand, it’s reasonably to think college will keep tabs on him.

Shane Scarpace, LB, Chaminade (CA): No stranger to competition, the setting did not intimidate the 6-foot and 210-pound junior. Also worth mentioning, he did well in the spotlight.

Luke LaCilento, OL, Servite (CA): The 6-3 and 315-pound junior has received interested from the likes of the Pac-12 Conference and Big 12 Conference. He’s destined to play on Saturdays.

Nathan Peterson OL, Dixon (CA): An underclassman, the 6-5 and 270-sophomore impressed everyone. Ari Sallus of Palisades (CA) and Richard Miranda of Claremont (CA) also did well.

Winston Polite, DL, Notre Dame (CA): The 6-4 and 235-pound junior had plans to attend the workout, that is until an unforeseen circumstance prevent him from making an appearance.

Nigel Edwards, DL, San Fernando (CA): The 6-2 and 250-pound junior had a motor that did not stop. Seemingly with one gear, full-speed, he took on anyone lined up in front of him.