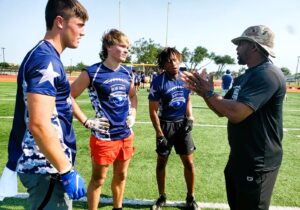 In the debut of the workout in this part of the country, the Blue-Grey All-American Combine (South Texas Regional) turned out to be a resounding success. Much better than many thought possible.

NFL veteran Ken Stills was the lead instructor, and after a thorough discussion with him, also the likes of David Amador along with other brand administrators, there were plenty of rave reviews.

Reece Sampayo, QB, 2023, Veterans Memorial (TX): The 6-foot-2 and 175-pounder stood out in a crowd. Same thing can be said about his versatile counterpart Jake Garcia from Donna (TX).

Trey Taylor, RB, 2024, A&M Consolidated (TX): On the official roster, but unfortunately, the 5-9 and 175-pounder missed all the action. He plans to attend another upcoming event.

Omar Dela Garza, RB, 2023, Grulla (TX): Good in the ground game, and passing, the 5-9 and 160-pounder turned some heads. Fabian Garcia from San Benito (TX) was in the same category.

Colton Harrison, WR, 2024, Portland Gregory (TX): Regardless of class distinction, and position, the 6-3 and 200-pounder might’ve been the best of the bunch. UTSA is interested in him.

Tyrell Trevino, WR, 2023, Mercedes (TX): Navy and Sam Houston State have kept a watchful eye on the 5-10 and 175-pounder. An offer could materialize at some point in the near future.

Cooper Morris, WR, 2023, Lubbock Cooper (TX): It would not be a major surprise to see the 6-foot and 180-pounder emerge as a recruit that Conference USA schools take a long look at.

Gunnar Williams, WR, 2023, Porter (TX): The 5-11 and 175-pounder did a little bit of everything. Most of it well, worth mentioning. His effort won’t be forgotten anytime soon.

Dylan Shaw, OL, 2023, Flour Bluff (TX): A Texas Tech commit, and on the official roster, the 6-4 and 300-pounder was unable to attend the workout. Plans are in the works for redemption.

Gabriel Dougherty, OL, 2023, Rowe (TX): Another big body, the 6-4 and 260-pounder was difficult to deal with down in the trenches. He gave opponents fits, more often than not.

Jeremiah Wilson, DB, 2023, Cuero (TX): The 6-1 and 175-pounder was up for anyone and anything. Parker Cabra from Randolph (TX) also deserved a mention after his effort.

Orlando Gonzalez, DB, 2023, Edinburg North (TX): The 5-11 and 170-pounder was a competitor, from start to finish that is, along with Gilbert Trillo from Veterans Memorial (TX).

Zach LaCombe, LB, 2023, Rouse (TX): The 6-foot and 220-pounder has his sights set on Air Force and Houston. For the time being. He’s destined to play on Saturdays, that’s the point.

Jaeden Davis, LB, 2023, China Spring (TX): Tough and strong, quick and fast, athletic in general, the 5-10 and 185-pounder made plays from sideline to sideline. On a consistent basis, as well.

Jarret Gest, LB, 2023, Carrizo Springs (TX): The 5-11 and 195-pounder opened up some eyes with his grit and sheer determination. There’s plenty to like about his overall skill set.

Pedro Silguero, DL, 2023, Harlingen (TX): Athletic as they come, one of the strongest individuals around to boot, 6-foot and 225-pounder left a lasting impression on many onlookers.

Nick Gomez, DL, 2023, Raymondville (TX): The 6-3 and 320-pounder looked the part and played the part. In the process, he successfully earned the respect of his many peers.