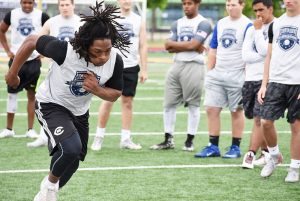 Big 12 Conference target Ahmad Brown was among the many talented prospects on hand at the recent Blue-Grey All-American Combine outside of Dallas (TX). (Photo courtesy of Underground Sports Network)

No question about it, when it comes to experience, the NFL veteran coaching staff put in place for the recent Blue-Grey All-American Combine (Southwest Regional) was about as good as it gets.

Mark McMillian ran the show in the backyard of fellow one-time professional George Teague and had help from the peers such as Ray Crockett, Tony Banks and Chris Taylor, among the others.

The real winners, naturally, were the prospects in attendance who had the opportunity to workout with the powers that be, in a setting unlike no other, and located just outside of Dallas (TX).

Accordingly, following a meeting of the minds with McMillian & Co., here are details on the recruits who left a lasting impression when given a chance during the morning and afternoon session.

Drew Wylie, QB, Pearce (TX): The 6-foot-1 and 185-pound junior was likely one of the more well-known names at his position and did not disappoint with his effort.

Jadrian Smith, RB, Mexia (TX): The 5-11 and 170-pound junior did all of the little things well, so did Jacob Berry from Marion (TX) and Jordan Breedlove from Harper (TX).

Chantz Scurry, RB, Ardmore (OK): The 6-1 and 190-pound junior did well when given the chance during one-on-ones, and in the end, made the most of his opportunities.

Joshua Tips, WR, Trinity Christian (TX): With a target on his back, the 6-4 and 185-pound junior delivered results. No surprise here, Louisiana Tech has expressed interest.

Darryl Crockett, WR, Southlake Carroll (TX): The 5-9 and 150-pound junior possesses plenty of upside, perhaps more so than anyone in attendance. Keep an eye him.

Thomas Williams, WR, Hendrickson (TX): Athletic, the 6-2 and 191-pound junior made plays all over the field. Same can be said about Braeden Vance from Ardmore (OK).

Dayson Adaway, Spring Hill (TX): The 6-foot and 166-pound junior did well, along with Micah Brooks from Irving (TX) and Dakota Paschall from Glen Rose (TX).

Max Wadding, TE, Flower Mound (TX): With feelers from Conference USA, specifically speaking SMU, the 6- 3 and 200-pound junior impressed the powers that be.

Ahmad Brown, LB, Carthage (TX): The 6-foot 215-pound junior was a force to be reckon with, from start to finish. Teams from the Big 12 Conference have reached out.

Brayden Mathis, LB, China Spring (TX): Sideline to sideline, the 6-2 and 215-pound junior could not be stopped. Worth noting, he aspirations of playing in the Ivy League.

Daniel Packard, LB, Bishop Lynch (TX): The 5-11 and 205-pound junior had little, or no, problems in coverage against seemingly all the running backs and tight ends.

Bryson Jenkins, DB, Frisco Centennial (TX): The 6-1 and 185-pound junor with varied levels of interest from the Big 12 Conference can line up anywhere on the field.

Buddy Jackson, DB, Kilgore (TX): Once a relative unknown on the recruiting landscape, the days of flying under the radar could be over for the 5-9 and 165-pound junior.

Braylen Books, DB, Sachse (TX): The 5-9 and 154-pound sophomore was not intimidated, nor was Adam Barnes from John Paull II (TX). Both of them got the job done.

Zach Frazier, OL, McKinney North (TX): Texas State seems to be on the bandwagon of the 6-6 and 320-pound junior. Oklahoma State and Kansas State are also in the mix.

Jaylin Hendrix, OL, Everman (TX): The 6-4 and 310-pound junior opened up plenty of eyes. That said, the contact from schools in Conference USA makes complete sense.

Truett Knox, OL, Aledo (TX): Given the high level of competition the 6-2 and 270-pound junior sees on a regular basis, the recent contact from Army is certainly warranted.

Caleb Reed, OL, Everman (TX): The 6-2 and 295-pound junior seems on the verge of coming into his own. Bryce Stavinoha from Scurry-Rosser (TX) deserves a mention, too.

Kole Pannell, DL, All Saints Episcopal (TX): Kansas State and TCU have stepped up their respective efforts to stay in contact with 6- 3 and 235-pound junior. Rightfully so.

Griffin Hunt, DL, Lovejoy (TX): The 6-4 and 235-pound junior didn’t back down from any challenge that was presented. In fact, more physical the play, the better he did.

Drake Welch, DL, Wellington (TX): Eager to prove he belonged, the 6-4 and 235-pound junior handled business. Cole Todd from Eaton (TX) helped his cause, as well.