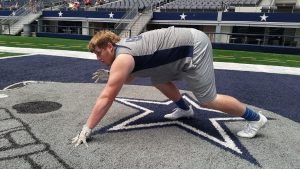 With interest from the Big 12 Conference, Jordin Linn was among the many well-known names at the Blue-Grey All-American Combine at Dallas Cowboys’ AT&T Stadium.

Year after year, seemingly without fail, the nation’s top prospects attend the Blue-Grey All-American Combine (Southwest Super). This past weekend, naturally, was no different than workouts from recent memory.

What follows is a closer look at the individuals, some high-profile and others under-the-radar, who did well when given the opportunity in front of the one-time professionals. At an NFL facility, no less, and in front of scouts.

Sam Huckabee, QB, Summit Christian Academy (MO): The 6-foot-3 and 200-pound senior did well, and in the past, has been in contact with schools such as Kansas and Missouri State.

Wyatt Hayes, QB, Gallatin (TN): Not intimidated, the 6-foot and 180-pound senior held his own. So did Hunter Edwards from Nelsonville York (OH) and Ethan Hartman from Glen Rose (TX).

Billy Reagins, RB, Kempner (TX): The 6-1 and 195-pound senior has an offer from Stephen F. Austin and multiple programs from the Big 12 Conference have jumped on the bandwagon.

Kameron Livingston, RB, Liberty-Eylau (TX): Don’t let an often times perceived lack of size fool you, the 5-7 and 175-pound senior got the job done. Oregon and Missouri are interested.

Caleb Horton, RB, Etowah (AL): The 5-9 and 168-pound junior, while still young, played with the poise of an upperclassman. No surprise, teams in the Sun Belt Conference have reached out.

Alec Watson, RB, Ralston (NE): With a high ceiling, the 5-8 and 165-pound senior has received a couple looks from different colleges. More specifically, Iowa State appears to be a fan of his.

Quintin Morris, WR, George Ranch (TX): A Bowling Green commit, the 6-3 and 205-pound senior was on a different level than most his peers, and accordingly, was named Offensive MVP.

Damario Portillos, WR, Pine Creek (CO): The 6-2 and 205-pound senior could land with a school in the Big West Conference. Don’t rule out his options in the Big Sky Conference as well.

Luke Ward, WR, Northview (AL): Not long ago, the coaches from Troy engaged in talks with the 6-2 and 190-pound senior. Similarly, the staff at Tennessee has also inquired about him.

Albert Connell, WR, Lamar (TX): The 5-11 and 170-pound senior was a late addition to the roster, but worth the wait. Isaiah Allen from Liberty (CO) is another name to remember.

Jace Wells, TE Springfield Catholic (MO): A big target down in the red zone, for obvious reasons given his frame, the 6-4 and 225-pound senior made plenty of plays worth remembering.

Jackson Pace, TE, Pleasant Grove (TX): The 6-3 and 215-pound senior was one of the top athletes on hand. Scouts from several colleges located in the Southwest understand his upside.

Paul Daniels, TE, Dallas County (AL): The 6-5 and 230-pound senior would not be denied in the air and his ideal frame for the next level certainly came in handy when it mattered most.

Gerardo Gonzalez, LB Roma (TX): Baylor has eyes on the 6-1 and 230-pound senior, and with continued improvement, signs point to him being destined to play ball at the next level.

Elijah Green, LB, Maryville (MO): The 6-foot and 215-pound senior is no stranger to hard work and that type of dedication has piqued interest from Purdue, among other teams.

Gunnar Murphy, LB, Melissa (TX): He looked the part. And played the part. That said, the 6-2 and 230-pound senior has a bright future ahead. The journey will be worth watching.

Brandon Smith, LB, Tucson (AZ): The 6-1 and 220-pound senior has been in contact with teams in the Big Sky Conference, and more recently, programs in the Pac-12 Conference.

Dallas Williams, LB, Washburn (MN): Grambling State tops the list of the 5-10 and 177-pound senior and it might be a mere matter of time before his first scholarship materializes.

Connor Landers, LB, Hartselle (AL): The 5-11 and 220-pound senior has several potential suitors, those include Central Arkansas and Jacksonville State. Keep an eye on him.

Tanner Smith, LB, Southern Boone (MO): With only one gear, that being full speed, the 5-11 and 205-pound senior had his foot on the gas and was impressive throughout.

Orlando Venegas, DB, Del Rio (TX): Never one to back down from a challenge, t 6-foot and 165-pound senior took on everyone and walked with hardware for Defensive MVP.

Sterling Alford, DB, Edmond Santa Fe (OK): The 6-2 and 175-pound senior has been in communication with the Pioneer Football League and more schools could come calling.

Everett Gunnoe, OL, Krum (TX): North Texas, SMU, and the rest of Conference USA, have targeted the 6-4 and 274-pound senior and someone is going to end up with a steal.

Johnathan Burpo, OL, Baker (AL): The 6-3 and 300-pound senior was the Offensive Lineman MVP and is on the wish list of those in the Mid-Eastern Athletic Conference (MEAC).

David Ash, OL, Eastwood (TX): UTEP would like nothing more than to land a verbal from the 6-3 and 290-pound senior. Nevertheless, it might take a little while for his decision.

Jesse Hoffman, OL, Blue Valley West (KS): The 6-4 and 320-pound senior has been tabbed as an FCS type of prospect, yet, there’s no stopping him from emerging on FBS radar.

Samuel Burt, OL, Abilene (KS): Nearby and in-state Kansas State could emerge as the frontrunner for the 6-4 and 230-pound senior. For the time being, the Wildcats must wait.

Eric Reid, OL, Stufford (TX): The 6-1 and 265-pound senior seems poised to entertain offers from the Big Sky Conference. Same thing can be said about the Southland Conference.

Qua’Tavis Harrell, OL, North Edgecombe (NC): North Carolina State and East Carolina have made sure to contact the 6-5 and 330-pound senior. The ball is in his court these days.

Tyrekus Birch, DL, Wichita South (KS): The 6-4 and 215-pound senior was unstoppable most times during one-on-ones and was the unanimous choice for Defensive Lineman MVP.

Jordin Linn, DL, Neodesha (KS): Oklahoma State and Kansas State have identified the 6-2 and 280-pound senior as a capable contributor. Rightfully so considering his skill set.

Brendan Webb, DL, Buhler (KS): Eager to prove himself, the 6-4 and 200-pound junior was one of the top underclassmen at his position, same for Braden Evans from Durango (CO).

For a closer look at all the participants at the recent All-American Combine, including statistics during skills testing, we’ve got you covered with the numbers right here (click on this link).