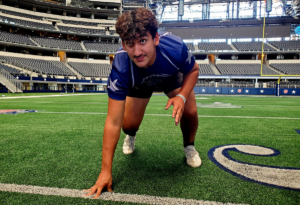 Big 12 Conference target Joe Gutshall was among the prospects in attendance at the Blue-Grey All-American Combine (Southwest Super).

Bax Townsend, QB, 2023, Lubbock Christian: Dartmouth and Davidson have their sights set on the 6-foot and 180-pounder. Others are sure to jump on the bandwagon.

Evan Rearick, QB, 2023, Erie (CO): The 6-4 and 215-pounder could land with a school in the Big Sky Conference and the fit just might be best for everyone involved.

Jaden Osborne, QB, 2023, Ruston (LA): Louisiana Tech, some in the know might say, is the frontrunner to land a potential commitment from the 6-foot and 170-pounder.

Jacoby Norris, RB, 2023, Tatum (TX): In a near perfect world, the 5-9 and 180-pounder finds a home in the American Athletic Conference, perhaps with someone like SMU.

Ezekiel Jones, RB, 2024, Brady (TX): You heard it right here first, it’s only a matter of time before the 6-foot and 170-pounder starts to rack up several different offers.

John Raybuck, RB, 2024, Coram Deo Academy (TX): Big and strong, quick and fast, the 6-1 and 205-pounder has bright future ahead. One that includes playing on Saturdays.

Aidan Rios, RB, 2023, Marion (TX): With fair amount of contact with teams in the Ivy League, signs point to the 5-11 and 170-pounder having options at the next level.

Armani Patterson, RB, 2023, Rangeview (CO): South Dakota State has seemed intrigued by the talents of the 5-10 and 185-pounder. Let’s see where the relationship goes.

Matthew Tryon, RB, 2023, Pflugerville (TX): The 5-10 and 205-pounder has established contact with teams in the Southland Conference. Now, he must deliver results.

Brandon Tolbert, RB, 2023, Muskogee (OK): Not afraid of anyone, or anything, the 5-9 and 190-pounder proved he was up for the challenge. He earned everyone’s respect.

Aaron Jackson, WR, 2023, Monroe (LA): Jackson State and Mississippi State have expressed varied levles of interest in the 6-1 and 166-pounder and that’s a good start.

Nikaidian Gray, WR, 2023, Lake Dallas (TX): The 5-11 and 180-pounder appears to be bound for the a place in the Western Athletic Conference, perhaps Lamar.

Taelen Laird, WR, 2023, Woodward (OK): Memphis and Texas Tech could be potential future homes for the 6-4 and 180-pounder. All sides would be happy with the outcome.

Jaylon Welch, WR, 2023, Bolton (LA): Louisiana Lafayette has seen something it likes in the 6-1 and 175-pounder. No surprise there, either. He’s a well-rounded recruit.

Giovanni Robinson, WR, 2023, Yuma (AZ): A possible good addition for a school in the Big Sky Conference, the 6-foot and 180-pounder has plenty of upside.

Garrett Vaughn, WR, 2024, Bixby (OK): Quick and fast, shifty and elusive, the 5-8 and 160-pounder has a game that’s tailormade for Conference USA play.

Demarion Postell, WR, 2023, Tolleson Union (AZ): The 6-3 and 175-pounder is just now starting to realize some of his immense potential. Sky’s the limit.

Nicholas Fattig, OL, 2023, Clear Springs (TX): With an offer list that could soon approach double digits, the 6-5 and 275-pounder was a force to be reckon with.

Gabriel Hernandez, OL, 2023, Lumberton (TX): Lamar, Louisiana Lafayette and Stephen F. Austin remain on the bandwagon of the 6-3 and 280-pounder.

Isaiah Mworia, OL, 2023, Weiss (TX): The 6-5 and 285-pounder has kept the lines of communication open with the likes of Sam Houston State, among several others.

Jude Foster, OL, 2024, Southern Lab (LA): When all is said and done, as an upperclassman, the 6-4 and 250-pounder could end up with scholarships in place from the SEC.

Peyton Knoebel, OL, 2024, Ralston Valley (CO): With visits to SMU and TCU, the 6-4 and 270-pounder is heading down the right path. Next stop is college ball.

Matthew Jennings, OL, 2024, Pine Creek (CO): An underclassmen who played like a senior, at times, the 6-3 and 260-pounder is heading down the path to success.

Jahme Dawson, DB, 2023, Walden Grove (AZ): What he lacks in often perceived stature, right or wrong, the 5-8 and 160-pounder makes up with sheer athleticism.

Matthew Moore, LB, 2023, Ellison (TX): With SMU and several others from the American Athletic Conference in the mix, the 6-1 and 212-pounder is just about set.

Camron Walker, LB, 2023, Crawford (TX): The 6-foot and 195-pounder has caught the attention from Davidson and Drake. Keeping tabs on him is a must now.

Myles Phillips, LB, 2023, Jenks (OK): No stranger to stiff competition, the 5-10 and 185-pounder thrived in this type of environment. The stage was not too big for him.

Bo Hammons, LB, 2023, Beckville (TX): The 5-10 and 205-pounder is on radar of schools in the Southland Conference. An offer could soon materialize, as well.

Austin Gace, LB 2023, Hitchcock (TX): Tough and durable, with good feet and hips, awareness too, the 6-foot and 190-pounder made plays from sideline to sideline.

Jarret Gest, LB, 2023, Carrizo Springs (TX): It did not matter, running backs or tight ends, the 5-11 and 195-pounder was up to the task and shutdown nearly everyone.

Tristan Black, LB, 2023, Glen Rose (TX): The 6-1 and 187-pounder left a lasting impressions. Not only on the coaching staff, but also his many counterparts on the field.

Aaron Obey, LB, 2023, Bolton (LA): A competitor through and through, the 6-foot and 175-pounder got the better of his opponent. More often that not, worth noting.

Joey Lightfoot, DL, 2023, A&M Consolidated (TX): The 6-3 and 300-pounder is destined to play on Saturdays, and most likely, with a program in Conference USA.

Joe Gutshall, DL, 2023, Lorena (TX): Baylor and Oklahoma State have seen something they like in the 6-3 and 260-pounder. His future is bright, there’s no doubt about it.

Noel Mekogue, DL, Sweetwater (TX): Not flashy, more workmanlike, with a no-nonsense approach, the 6-1 and 270-pounder was a favorite of the instructors.

Jarell White, DL, 2023, Klein Oak (TX): Difficult to deal with down in the trenches, the 6-2 and 280-pounder, with feelers from Conference USA, dominated most of the time.

Pedro Silguero, DL, 2023, Harlingen (TX): For the second time in about a month’s span, the 6-foot and 225-pounder proved that he belonged with some of the best.

Connor Cobern, DL, 2023, Mt. Vernon (TX): The 6-1 and 225-pounder has established a fairly consistent line of communication with the likes of SMU and UTSA, to name a few.

Kade George, DL, 2023, Allatoona (GA): Georgia Southern and South Alabama have kept tabs on the 6-1 and 280-pounder. The path to success seems clear, as well.

Dobson Beaird, DL, 2024, Covenant School of Dallas (TX): Samford and Tulsa are fans of the 6-2 and 215-pounder. Rightfully so, given his effort in this setting.

Bailey Serignet, DL, 2023, Jo Byrns (TN): With ongoing conversations take place with several programs, the 6-2 and 210-pounder is a lock to play at the next level.

John Hainer, DL, 2023, Granada (CO): Athletic, and capable of playing on both sides of the ball, the 6-4 and 260-pounder could end up finding a home on defense.