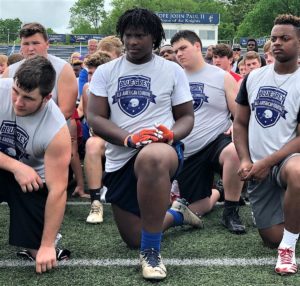 Conference USA target DeCarius Hawthorne was among the participants at the Blue-Grey All-American Combine (Tennessee Regional).

There was plenty of hype surrounding the Blue-Grey All-American Combine (Tennessee Regional), and after further review, the collection of talent lived up the advanced billing.

With a staff of NFL veterans in place, they  passed along their collective knowledge of the game. Fellow one-time professional Just Geisinger was also on hand to provide assistance.

Both coaches, along with the brand’s administrators had nothing but good things to say about the workout. Accordingly, what follows is a closer look at a few of the many highlights.

Cole Kirk, QB, McNairy Central (TN): The 6-foot-2 and 175-pound junior was the best at his position. No surprise, East Tennessee State, Memphis and Samford are interested.

Braxton Cox, QB, Draughn (NC): A target of teams in the Ivy League, with Princeton out in front at the moment, the 6-1 and 185-pound took advantage of his important opportunity.

Kemari McGowan, RB, Middle Tennessee Christian (TN): On the roster, unable to attend and with plans for another workout, the 5-11 and 190-pound junior is one to watch.

Savion Davis, RB, Stewarts Creek (TN): The 5-9 and 185-pound junior has talked with several schools in Conference USA, and no surprise, Middle Tennessee State is in the mix.

T.J. Dorsey, RB, Germantown (TN): The 5-10 and 175-pound junior communicated with the Ohio Valley Conference, among the more notable programs might be Austin Peay.

Peyton Higgins, WR, Mars Hill (AL): Young and still largely raw, on paper that is, the 5-10 and 170-pound sophomore held his own. Accordingly, Troy could be a landing spot.

Tyren Hayden, WR, Owensboro (KY): Austin Peay has noticed something about the 6-3 and 185-pound junior. Others figure to follow suit. Sooner rather than later, as well.

Noah Burnette, TE, Loudon (TN): The 6-5 and 234-pound junior looked the part. And played the part, too. Matter of fact, the same goes for Max Cash from Hampton (TN).

Logan McInnish, OL, Mars Hill (AL): Jacksonville State and Samford appear to be fans of the 6-4 and 315-pound junior. One has to wonder when an offer could materialize.

Andrew Farmer, OL, Sunbright (TN): One of the more impressive prospects, regardless of position, the 6-3 and 318-pound junior is on the radar of Tennessee-Chattanooga.

William Wheeler, OL, Franklin Road Academy (TN): The 6-2 and 295-pound junior has been on campus at Duke and Georgia Tech, among others. His name is one to remember.

Bryce Bowers, OL, Anna-Jonesboro (IL): The 6-3 and 290-point sophomore did well, with Kevin Burkett from Gatlinburg-Pittman (TN) and Colton Alexander from Greenback (TN).

Isaiah Hall, DB, Northwest (TN): The 5-11 and 160-pound junior was not intimidated by the big stage. In fact, he did particularly well in the spotlight, with all eyes on him.

Myles Mayo, DB, Lexington (TN): The 5-9 and 168-pound sophomore did a good job, with Dante Prowell from Spring Hill (TN) and Le’Andre Stutzman from Franklin-Simpson (KY).

Nicholas Paschall, LB, Lipscomb Academy (TN): Drake and Western Kentucky has kept tabs on the 6-1 and 205-pound junior in the past. Cincinnati could be another option.

Josiah Millsaps, LB, Greenback (TN): The 6-foot and 220-pound junior is interested in Eastern Kentucky, Tennessee Tech and Western Carolina. The feeling seems to mutual, too.

Aidan Holt, LB, East Hamilton (TN): The 6-foot and 215-pound junior could find a home in the Pioneer Football League and all signs point to Morehead State opening its doors.

DeCarius Hawthorne, DL, Center Point (AL): Tulane was the first to put a scholarship in place for the 6-2 and 256-pound junior and he could have double-digit offers soon.

William Long, DL, Hopkinsville (KY): No stranger to the setting, the 5-11 and 250-pound sophomore strengthened a growing reputation. He’s destined to play on Saturdays.

Riley Burke, DL, Russell County (KY): The 6-4 and 260-pound sophomore did well, along with Isaac McGhee from Cumberland (TN) and Tanner Daniels from Quapaw (OK).