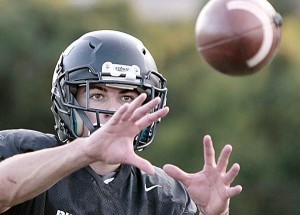 Delaware commit Vinny Papale will line up for the North at the Blue-Grey All-American Bowl on Jan. 10 at Raymond James Stadium. (Photo courtesy of philly.com)

With the Blue-Grey All-American Bowl right around the corner, on Jan. 10 to be exact, we figured it was time to take a closer look at the prospects who line up at Raymond James Stadium, the home of the Tampa Bay Buccaneers.

Opening kickoff between the North and South is at 8 p.m. (EST) and Fox Sports will stream the action live (click right here for the link). In the meantime, over the next week, expect a breakdown of the players on the roster for both teams.

So, with that said, let’s get down to business, and in this particular edition, we’ll focus on the offensive side of the ball for the North. Stay tuned for more.

Clayton Oliver, QB, Colleyville Heritage (TX): The 6-foot-2 and 190-pounder recently received his first offer and the scholarship was put in place by South Florida. Also worth mentioning, a handful of other schools are interested in him and are on the verge of doing the same thing. The best is yet to come.

Will Pyburn, QB, La Salle (CA): When it comes to passing the eyeball test, the 6-5 and 200-pounder has never had a problem doing so. That said, it shouldn’t come as a major surprise to learn that a handful of programs have expressed interest in the talented lefthander.

Skylor Clinton, QB, Prescott (AZ): The 6-3 and 210-pounder does a little bit of everything. Most of it well. Given his tremendous versatility, and in addition to his duties as a signal-caller, it’s reasonable to think he could end up playing multiple positions in this one.

Shane Simpson, RB, Easton (PA): Up the middle, to the outside, the 5-10 and 175-pound Towson commit has little or no problem picking up yardage once he puts his mind to it. Allowing him to get into a rhythm could prove to be a costly mistake by the defense.

Dominic Struckhoff, RB, St. Francis Borgia (MO): Need to pick up tough yards on third-and-short to keep the chains moving, or need to stick the ball in the end zone down around the goal line, put the onus on the 6-1 and 210-pounder and then expect the desired result.

Ki’Jon Washington, RB, Cerritos (CA): The 6-2 and 200-pounder has flown underneath the radar for a while now. Those days, however, appear to be coming to an end. While he’ll get plenty of opportunities to carry the ball, catching a few passes is another possibility.

Tunde Akindele, RB, El Paso Prep Academy (TX): From across the pond and a native of England, the 5-11 and 185-pounder has adjusted well to life on American soil. Given a chance to go up against the best of the best, it will be interesting to see how he responds.

Roman Andrews, RB, Gross Catholic (NE): Don’t let an often times perceived lack of size fool you, the 5-6 and 180-pounder plays bigger than his listed height and weight. Each and every time that he’s doubted, Andrews figures out a way to prove the naysayers wrong.

Michael Davis, RB, Meigs (OH): The 5-10 and 170-pounder won’t be deterred by what appears to be a deep, talented, and crowded, backfield. Known to make the most out of a situation in the not so distant past, he will likely take advantage of his many opportunities.

Darrell Adams, WR, Stellar Prep (CA): One of the more high-profile prospects in the game, regardless of position, the 6-4 and 220-pounder has a bright future ahead. Miami, Notre Dame, Oregon and UCLA are a few of the programs who have been in contact with him.

Darick Holmes Jr., WR, Newbury Park (CA): The 5-9 and 185-pound Arizona commit is the prototypical slot receiver. Anything that’s thrown his direction, if the pattern is underneath, or if stretching the field is necessary, chances are he comes down with the catch.

Vinny Papale, WR, Bishop Eustace Prep (NJ): If the name looks familiar, it should. The father of the 6-1 and 180-pound Delaware commit is Vince Papale, the central figure in the movie Invincible. Nevertheless, the younger version has made a name for himself.

Ardell Brown, WR, Bishop Kearney (NY): The 5-10 and 160-pounder has been contacted by several schools, perhaps most notably Penn State. Unfortunately, he has not landed that initial eye-opening offer. That situation could change sooner rather than later.

Kyle Cotton, WR, Gretna (WR): A favorite of many signal-callers in the red zone, and rightfully so, the 6-2 and 195-pounder has always presented a big target. That doesn’t figure to change anytime soon. In terms of jump-balls, the advantage typically tends to be his.

Austin Daniels, WR, Omaha Burke (NE): The 6-foot and 185-pounder is usually in the right place at the right time. That is, more often than not. His understanding of the time and situation makes him an asset from the opening kickoff until the final whistles sounds.

Dominic Fredrickson, OL, Freedom (CA): Before committing to San Jose State back in September, the 6-3 and 300-pounder had a scholarship count that was close to a double-digit total. In terms of high-profile prospects at his position, few are as well-known as him.

Logan Slaughter, OL, Mendon (MI): The 6-5 and 280-pound Central Michigan commit was a man among boys on the prep circuit. This time around, he’ll be facing similar competition, recruits of his caliber. Still, signs point to him winning the upcoming one-on-one battles.

Austin Clark, OL, Rockbridge County (VA): Safe to say that the 6-6 and 297-pound Virginia Tech commit stands out in crowd once he steps on the field. Not only does Clark look the part, the big man also plays the part. No doubt about it, he’ll be a difference-maker.

Chris Lindstrom, OL, Shepherd Hills (MA): Blessed with strong bloodlines, his father who has the same name played in the NFL for a number of years, the 6-5 and 260-pound Boston College commit is heading down the right path. Enrolling in college early is a possibility.

Clayton Dry, OL, Mountain Pointe (AZ): Despite the process taking a bit longer than expected, it appears as if colleges at the NCAA Division I level have discovered this hidden gem. A month, or so, from now the 6-3 and 275-pounder should have his share of options.

Anthony Forte, OL, Del Norte (CA): With a motor that doesn’t stop, the 6-4 and 260-pounder is just about always going full-speed

Zakk Ryherd, OL, Menno (SD): Coaches have nothing but good things to say about workmanlike effort of the 6-foot and 250-pounder.

Brad Harless, OL, Meigs (OH): The 6-2 and 265-pounder is never afraid to mix it up in the trenches, right at the line of scrimmage.

Noah Herington, OL, Bath Haverling (NY): Equipped with a nasty streak, it’s not wise to get on bad side of the 6-4 and 300-pounder.

Sam Raywood, OL, Pennsburg (PA): They certainly don’t make them much bigger, or even tougher, than the 6-3 and 292-pounder.

Scott Rucci, OL, Upper Darby (PA): Regardless of pass-protection or run-blocking, the 6-2 and 258-pounder can get the job done.

Steve Johnson, K, Hempfield (PA): Equipped with a big leg, the 5-10 and 165-pounder has plenty of range from long distance.