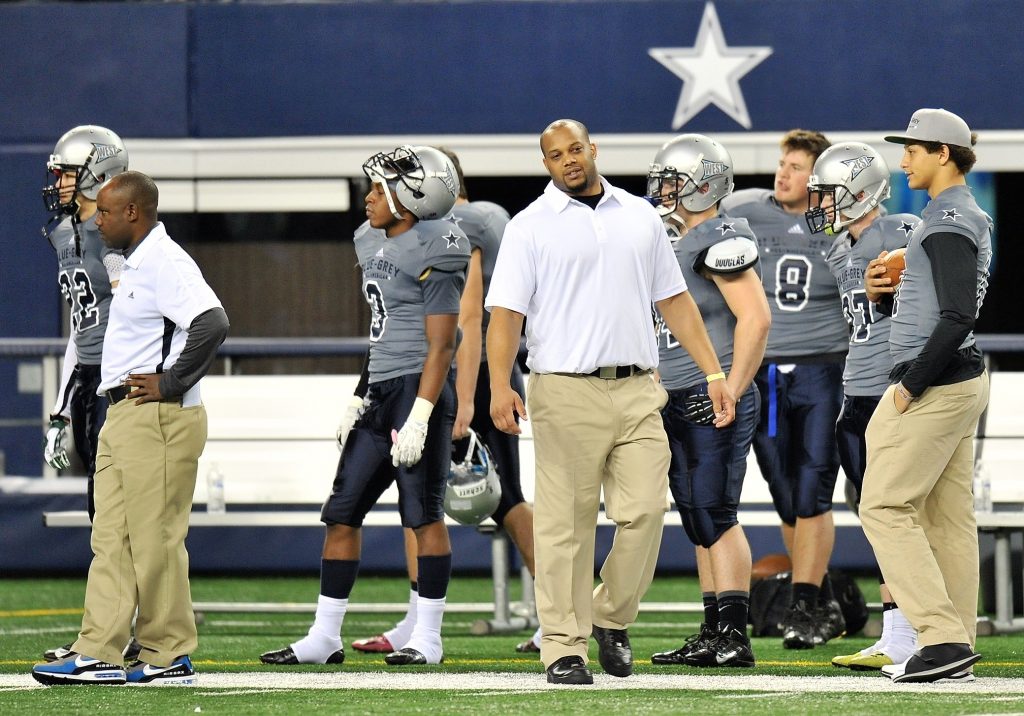 Since the inception of the Blue-Grey All-American Bowl nearly a decade ago, plenty of prospects, some of them high-profile with others under-the-radar, have come and gone. Still, the talent level across the board on the national level has been about as good as it gets.

To gain a better of understanding about the rapidly growing direction of things, perhaps it’s best to take some time to reflect on the humble beginnings. Therefore, often moving forward, the plan is to closely examine the brand’s many alumni from all over the country.

Before taking the NFL seemingly by storm in this, his second year with the Kansas City Chiefs, Patrick Mahomes from Whitehouse (TX) made a name for himself during the West’s 41-7 victory over East in the brand’s All-American Bowl at Dallas Cowboys’ AT&T Stadium.

At the time, in an effort to prevent any further setbacks to a somewhat minor injury, also at the urging of Blue-Grey Football administrators and doctors alike, he was largely limited with the planned on-field activities for All-American Bowl Weekend in the Lone Star State.

Nevertheless, there was an undeniable buzz surrounding every move of Mahomes. Back then, most would agree too, particularly the brand’s staff of NFL veteran coaches, there was something special about the 6-2 and 185-pound Texas Tech commit in the Class of 2014.

Worth mentioning, Mahomes was an active participant during a pair of practices leading up the game, most times, helping the one-time professional coaching staff with the game-plan. His presence also commanded attention during the brand’s Jersey Presentation.

“The way he carried himself, both on and off the field, over the course of our three-day event, Mahomes was a bit different from his peers and epitomized everything that Blue-Grey Football was about, and still is, to this day,” said brand CEO and former NFL agent Gus Bell.

“I’m very happy for his success at Texas Tech and now with the Kansas City Chiefs. But can’t say that I’m surprised. When you talk about individuals with the It Factor, and I’ve been around a lot of them over the years, Mahomes had it back then and does now, ” Bell added.

Not long after his appearance in the All-American Bowl, Mahomes moved on to the next level and played for the Red Raiders in the Big 12 Conference. In three short years, he put together some eye-opening numbers. On some of the biggest stages around, no less.

The coming out party was likely in a 66-59 conference loss to Oklahoma on Dec. 12, 2016. Against the Sooners’ Baker Mayfield, Mahomes was 52-of-88 with five touchdowns for an NCAA record-tying 734 passing yards and an NCAA record-breaking 819 all-purpose yards.

Naturally, the effort put plans in motion for him being a first-round pick, No. 10 overall for Coach Andy Reid and the Chiefs in the 2017 NFL Draft. An attentive understudy of Alex Smith last season, Mahomes was named the starter this year and hasn’t looked back since.

Off to a hot start with a 3-0 record, with a Monday Night Football showdown on the road at rival Denver looming at 8:15 p.m. (EST), Mahomes has completed 62-of-93 passes (137.4 passer rating) for 896 yards and 13 touchdowns. Most important, no interceptions.

In terms of upside, Mahomes possesses plenty, perhaps more so than anyone in years, according to many in the mainstream media. This is much is certain, what seems like a few short years ago, he first emerged on the national radar during the All-American Bowl in Texas.

“I saw it, everyone in the Blue-Grey Football family saw it, you could tell sky was the limit for him, even back then,” said NFL veteran Mark McMillian, who coached Mahomes in the All-American Bowl. “He was a great kid, from a great family, with great talent. We won with him.”