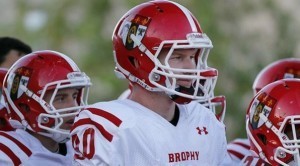 Connor Murphy was among the nation’s more high-profile prospects invited to the recent Blue-Grey Regional Combine in Arizona.

Similar to year’s past, there were plenty of prospects in attendance during this past weekend’s Blue-Grey Regional Combine at the University of Phoenix Stadium in Glendale (AZ), home of the Arizona Cardinals.

NFL veteran Mark McMillian was again the lead instructor. Also worth noting, Byron Evans and Rick Cunningham were among his many one-time professional peers on the coaching staff for the pair of workouts.

Given the wealth of experience on hand from those who played at the highest level, it’s safe to say that each recruit learned something new by day’s end. So, here’s a look at the individuals who left a lasting impression.

Connor Murphy, DL, Brophy Prep (AZ): The 6-7 and 250-pound junior, with several offers from the nation’s powerhouse programs, received an invite and attempted to make an appearance. However, due to a prior commitment, he could not put on a show as intended. Nevertheless, the future is bright for him. It’s reasonable to expect that Murphy will soon join the Blue-Grey All-American Bowl Watch List.

Alex Peters, QB, Horizon (AZ): The 6-foot and 190-pound junior did well when given the opportunity to throw the ball around once the one-on-ones started up.

Korey Jackson, RB, Peoria (AZ): When it came down to skills testing, the 5-10 and 210-pound junior scored off the charts. He turned out to be a jack-of-all-trades.

Sean White, RB, Basic (NV): The 5-8 and 227-pound junior is compact and built low to the ground and that, of course, often makes him difficult to stop, or contain.

Matt Caputo, WR, Mesquite (AZ): A big target, particularly so in and around the red zone, the 6-4 and 210-pound junior had his way when the ball was in the air.

Allante Shines, WR, Maryvale (AZ): The 6-1 and 190-pound junior was back for the second time in as many years. Once again, he delivered when called upon.

M.J. Harris, WR, Chandler (AZ): Seemingly without peer most times, the 6-foot and 178-pound junior gave opponents in the secondary trouble from start to finish.

Charles McCarthy, WR, Coolidge (AZ): The 5-9 and 150-pound junior was relative unknown before the whistle blew. In the end, he had made a name for himself.

Ryan Martinez, WR, Lee Summit North (MO): With plenty of competition at his position on the field, the 6-foot 165-pound junior found a way to make an impact.

DaQuan Davis, ATH, Coronado (NV): The 5-10 and 165-pound junior did a little bit of everything, and most of it, above average. He can play on both sides of the ball.

Alex Hunter, DB, Liberty (AZ): A late entry to the roster, the 6-2 and 205-pound junior who also plays linebacker and has received college interest, was worth the wait.

Ethan Eagerton, DB, Empire (AZ): The 6-1 and 185-pound junior opened up some eyes right around this time last year. The encore effort was better than his debut.

Tre Bugg, DB, Williams Field (AZ): An underclassman, the 5-10 and 150-pound sophomore didn’t back down from anyone and played with the poise of varsity veteran.

Joseph Turner, DB, Carson (CA): The 5-11 and 175-pound junior sacrificed and made a long road trip from the Golden State. He left with the respect of his peers.

Chase Hulbert, LB, Liberty (AZ): Capable of playing inside or outside on both sides mind you, the 5-11 and 195-pound junior proved to be as versatile as they come. 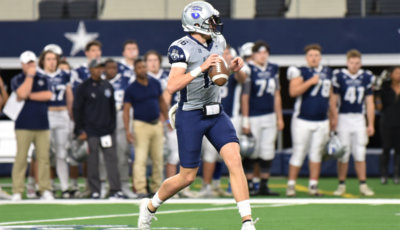