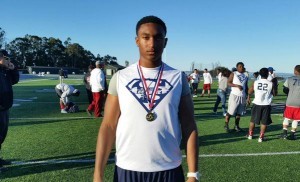 Morian Walker was among the high-profile prospects in attendance at the recent Blue-Grey Regional Combine in Northern California.

Without question, the collection of talent at this past weekend’s Blue-Grey Regional Combine out in Northern California was the best it’s been in years. Top to bottom, and across the board, prospects at seemingly every position on the field excelled when given the opportunity.

That said, it’s reasonable to expect that the selection committee for the Blue-Grey All-American Bowl will consider several individuals from the group in attendance at College of San Mateo on Feb. 22 for the big game. So, without further delay, here’s a look at the best of the best.

Kevin Davidson, QB, McClymonds (CA): Given his resume, and the interest from colleges on the West Coast, plenty was expected from the 6-foot-3 and 215-pound junior. And he delivered. Not surprising, Davidson has been in contact with UCLA and USC, among many others.

Ryan Jenkins, QB, Saint Mary’s (CA): The 5-9 and 170-pound sophomore impressed us from start to finish. Instead of being intimidated in the setting, he accepted each and every challenge, then earned the respect of his older peers. The future is, indeed, bright for him

Jerome Holloway, QB, Homestead (CA): As versatile as they come, the 5-11 and 182-pound junior did well in the pocket and proved effective on the run. Counterparts such as Mason Randall of Sacred Heart Prep (CA) and Sam Adams of Prospect (CA) also did well.

Morian Walker, RB, Valley Christian (CA): The 6-2 and 205-pound junior nearly stole the show and was named Co-Offensive MVP, along with Davidson. Destined for the next level, Walker remains in contact with schools from the SEC, Big 10 and Pac-12 Conferences.

Mike Green, RB, Grant (CA): If anyone was capable of giving Walker a run for his money, perhaps it was the 6-0 and 205-pound junior. Green, in fact, turned plenty of heads along the way. Our coaching of NFL veterans had nothing but good things to say about him.

Tamarick Pierce, RB, St. Mary’s (CA): The 5-10 and 197-pound junior possesses plenty of upside. He is a durable runner inside and an effective receiver from out of the backfield. There’s plenty to like about Pierce. Playing at the next level is a near certainty for him.

Brandon Duckett, RB, Encinal (CA): Once a relative unknown on the recruiting landscape, those days are soon coming to an end for the 5-8 and 175-pound sophomore. He was a truly difficult match-up for several linebackers and defensive backs during the individual drills.

Marqel McCoy, WR, Berean Christian (CA): The 6-3 and 185-pound junior was the premier player at his spot on the field and a quarterback favorite. Worth noting, Jeremiah Burks of Dublin (CA) and Ndem Okoro of Livermore (CA) took advantage of opportunities.

Trey Udoffia, DB, Del Oro (CA): Safe to say that longtime NFL veteran Mark McMillian was pleased with the effort of the 6-1 and 175-pound junior after seeing him in action. Udoffia, in fact, was in the conversation for Defensive MVP and narrowly missed out on the award.

Elijah Orr, DB, Grant (CA): The 6-0 and 175-pound junior is a competitor. He worked out well during the skills testing and did not take a play off once the one-on-ones got started. Orr has a high ceiling and we would not be surprised to see him emerge a legit recruit.

Imani Moore, DB, Dublin (CA): There was no shortage of talent in the secondary and the 5-9 and 175-pound junior turned out to be one of many names worth remembering. Others who held their own were Alberto Lara of El Camino (CA) and Ivan Collaco of Freedom (CA).

Jamarian Caston, LB, Archbishop Riordan (CA): The 6-0 and 225-pound junior lived up to the hype surrounding him beforehand and took home the hardware for Defensive MVP. Programs from the Big 12 Conference, including TCU and Texas, are on his bandwagon.

David Turner, LB, Valley Christian (CA): With a motor that, rarely if ever stops, the 5-10 and 193-pound junior left a lasting impression with his sheer determination. Playing at prep program with a great regional reputation, the speed of the game did not bother him.

Isaiah Hall, LB, Chaparral (CA): The 5-11 and 198-pound junior comes from good stock considering his father played NCAA Division I ball in the past. The younger version seems to be heading down a similar path and Hall figures to make a major impact in college.

Grant Kingston, LB, Anderson (CA): No task was too tough for the 5-11 and 180-pound junior. He graded out well, above average for that matter, during drills such as the 40-yard dash, broad jump and shuttle. There was no drop-off in the one-on-one facet of things either. 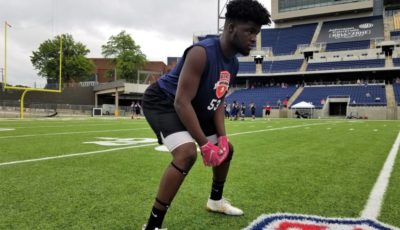