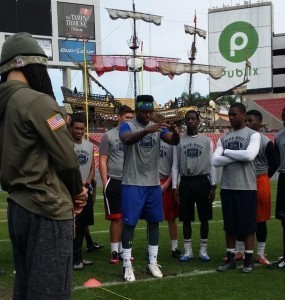 Tony Jones was among the many high-profile prospects in the Class of 2016 to participate in the recent Blue-Grey Regional Combine at Raymond James Stadium.

Prior to the kickoff of the recent Blue-Grey All-American Bowl at Raymond James Stadium, a 39-14 victory for the South over the North, we had the opportunity to catch a glimpse of the future at the home of the Tampa Bay Buccaneers.

Hours before the action took place between this year’s crop of recruits from the Class of 2015, underclassmen from all over the country participated in the Blue-Grey Regional Combine on the same field. And there was no shortage of talent.

Several players, in fact, left a lasting impression on the our coaching staff of NFL veterans and some of those individuals will soon find their names on the exclusive Blue-Grey All-American Bowl Watch List. Here’s a list of who’s who.

Rodrick Robinson, QB, Miami Norland (FL): The 6-foot-2 and 175-pound junior did well in the pocket and on the move. His game was well-rounded, and not surprising, he’s received recruiting interest from several schools in the ACC.

Garrett Ross-Johnson, QB, Indian Rocks Christian (FL): Vertical, underneath, sideline, it did not matter, the 6-2 and 175-pound junior made throws appear effortless. Florida International (FIU) and Central Florida (UCF) have contacted him.

Desmond Phillips, QB, Miami Jackson (FL): The 5-11 and 165-pound junior tested particularly well during the individual drills. He also held his own, and then some, once the one-on-ones started up. Overall, it was a good effort from him.

Sawyer Smith, QB, Tate (FL): With an offer from Southern Miss, also Duke and North Carolina in the picture, there was plenty of hype about the 6-foot-3 and 200-pound junior before things got started. He delivered on the advanced billing, too.

Tony Jones, RB, IMG Academy (FL): The 5-11 and 200-pound junior nearly stole the show. All eyes were focused on him. And rightfully so given his resume. Approaching double-digit offers, multiple programs from the SEC are on his bandwagon.

Darius Miller, RB, St. Petersburg (FL): Quick as they come, the 5-8 and 158-pound junior made more than a few opponents look foolish during individual drills. Once word starts to spread about his effort, things will pick up on the recruiting scene.

Zawuandre White, RB, North Fort Myers (FL): The 6-1 and 200-pound sophomore often played with the poise of an upperclassman. Just wait, by the time his senior season rolls around, odds are, he’ll have plenty of options at the next level.

Freddie Johnson III, WR, East Lee County (FL): The days of flying underneath the radar are coming to an end for the 6-1 and 167-pound junior. He proved as much, and with added confidence, it’s more than reasonable to expect big things from him.

James Jackson, WR, Dillard (FL): The 6-2 and 183-pound junior showed some nice burst in and out of cuts. Equally important, he flashed good hands throughout. You won’t find many complaints when it comes to his body of work in this setting.

Tyrrell Washington, WR, Montverde Academy (FL): A big target, the 6-4 and 215-pound junior had little, or no problems, when matched up one-on-one. He was seemingly unstoppable, at times. Another thing, he’s capable of lining up at tight end.

Trey McKitty, WR, Wesley Chapel (FL): The 6-4 and 205-pound sophomore possesses a fair amount of upside. Blessed with size and speed, and a role at tight end most likely in his future, his name is one to remember. And you heard it right here first.

MiCario Stanley, LB, Cape Coral (FL): South Florida (USF) should consider itself luck to have already landed a commitment from the 6-2 and 230-pound junior. Still, we would not be the least bit surprised to see several colleges jump into the mix.

Tyrik Jones, LB, Plantation (FL): The 6-3 and 230-pound junior is a hybrid, of sorts. A reliable as well as a capable contributor at the second level nowadays, he could be destined to play a bit closer to the line of scrimmage. That is, at defensive end.

A.J. Deshazor, LB, Lake Gibson (FL): Most in attendance agreed the 6-foot and 185-pound sophomore junior was without peer. On more than a few occasions, for the record. Accordingly, Virginia Tech has offered him. Other schools figure to follow suit.

Tyler Williams, LB, St. Cloud (FL): The 6-foot and 201-pound sophomore certainly didn’t perform like someone who was several years away from his graduation day. Suppose that best explains why Iowa State, Miami and Nebraska are all interested.

Val Mayes, DB, Miami Norland (FL): There was plenty to like about the skill set of 6-1 and 170-pound junior, especially when it comes to his overall athleticism. In terms of players at his position, very few of them measured up to him during the workout.

Bacarri Austell, DB, Wekiva (FL): The 6-foot and 180-pounder went toe-to-toe with some of the top prospects on the other side of the line of scrimmage and won many more battles than he lost. In terms of potential, sky’s the limit. No doubt about it.

Daymon Murray, DB, Lakewood Ranch (FL): We’ve seen him before. Right around this time last year, for the record. Similar to the first experience, the 6-3 and 200-pounder junior and safety impressed from start to finish. The future is bright for him.

Daniel Martel, OL, Wharton (FL): The 6-4 and 268-pound junior was considered as one of the premier prospects at his spot on the field. No easy task given the collection of talented big men. Versatile down in the trenches, the best fit is inside at guard.