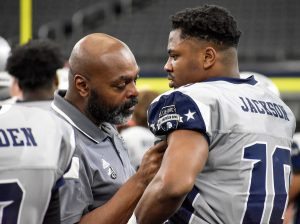 Plenty of hype surrounded the Blue-Grey All-American Bowl at Dallas Cowboys’ AT&T Stadium on Jan. 29, perhaps rightfully so given the well-rounded collection of talent in attendance.

No surprise, and according to plan, many of the high-profile prospects in the Class of 2019 lived up to the advanced billing, as did the under-radar types, as East defeated West, 26-7.

Big 12 Conference target Velton Gardner was seemingly unstoppable, at times, and scored on a 51-yard touchdown to give the East a 7-0 lead in first quarter. He was just getting started.

A one-time Texas Tech commit, now with Kansas in the mix for a potential pledge, Gardner ended up with nearly 200 all-purpose yards, and for his efforts, was named Offensive MVP.

The voting for the award was close, as to be expected. Multiple individuals, in fact, received plenty of consideration for the prestigious honor, one of them being T.Q. Jackson for the West.

The Arkansas commit was a close second, worth noting, and finished with five catches, each for what seemed to be a more important first down than the one before, also 79 receiving yards.

However, Missouri Valley Football Conference target Trey Vaval scored on a 24-yard interception return to increase the East advantage, 23-7, in the second half. The West never recovered.

With two picks, a no-brainer decision, Vaval was named Defensive MVP. He had help along the way from Ohio Valley Conference target Danny Jackson and MAC target Allen Jackson.

On the other side of the ball, meaning the opposite sideline, NFL veteran George Teague was head honcho for the East and his staff included the likes of Seneca Wallace, Chris Taylor and Dick Bell.

Lafayette commit Keegan Shoemaker and SMU commit T.J. McDaniel did their best to keep the West somewhat close on the scoreboard, as did Oklahoma State commit Preston Wilson.

In the absence of Stanford commit Jonathan McGill, Big Sky Conference target DeOnte Washington and Conference USA target Dias Redmond did well and picked up the slack for the West.