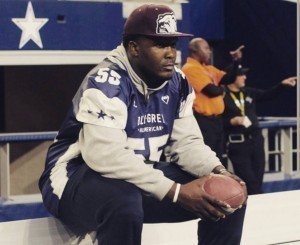 Similar to recent year’s past, many of the country’s more high-profile prospects were in action at the Blue-Grey All-American Bowl. This time, it was the Class of 2016 version and West defeated East, 21-14, on Dec. 20 at Dallas Cowboys’ AT&T Stadium.

The well-known names lived up to the advanced hype. After all, the scene was set for players to shine and receive added national exposure. They did so on one of the biggest stages around. Now, for most, up next is major college ball in the NCAA Division I ranks.

The student-athletes had an opportunity to work with our staff of NFL veterans, turned coaches for the Blue-Grey All-American Bowl, including the West’s Mark McMillian of Eagles and Chiefs fame.

Editors Note: NFL Veteran Evaluations seen below were randomly chosen. Still, each participant in this year’s Blue-American Bowl received a personal recommendation from the one-time professionals and that info was sent to the college coaches all over the country.

Paten Snell, QB, Scurry-Rosser (TX): Two of the main attractions were Texas A&M commit Nick Starkel and UC Davis commit Kevin Davidson. Snell made a name for himself and the 6-foot-3 and 190-pounder was Offensive MVP.

NFL Veteran Evaluation: “Snell was underrated. He proved people wrong. Someone needs to take a chance on him,” McMillian said.

Morian Walker, RB, Valley Christian (CA): The 6-1 and 210-pounder has received interest from several programs, primarily from those on the West Coast. Nevertheless, once he finally commits, that school will have landed a steal.

NFL Veteran Evaluation: “Walker is legit. He’s that dude. With good speed, strength, vision and hands, he can do it all,” McMillian said.

Mike Green, RB, Grant (CA): Big and elusive, there was no task too difficult for the 6-foot and 200-pounder. He has some feelers from teams out in the Mountain West Conference and a decision on his future could happen soon.

NFL Veteran Evaluation: “Do your research, he’s going to make some offensive coordinator out there very happy,” McMillian said.

Thomas Reid, WR, Radford (HI): Texas commit Davion Curtis and Mississippi State commit Zach Farrar commanded attention. Reid did not get lost in the shuffle, though. Not surprising, the 6-2 and 195-pounder has multiple offers.

NFL Veteran Evaluation: “Reid runs great routes and has great hands, that’s everything that you look for in a receiver,” Martinez said.

Nate Thompson, OL, Sachse (TX): Having the focus on Pac-12 Conference target Frederick Mauigoa was fine with Thompson. The business-like approach from the 6-6 and 330-pounder, a Texas Southern commit, opened up eyes.

Nate Hanna, OL, Saginaw (TX): Capable of playing multiple positions, including center, the 6-3 and 265-pounder was as versatile as they come. Another thing he had going for him, his motor did not stop. He knew full-speed only.

NFL Veteran Evaluation: “Hanna is a coachable kid. Ask him to do something once and the job always will get done,” Martinez said.

NFL Veteran Evaluation: “Jones’ hard work paid off during the game and it will in college as well. He’s a gamer,” McMillian said.

Elijah Orr, DB, Grant (CA): The 5-11 and 175-pounder never backed down from a challenge. That’s not in his mental makeup. A competitor, for obvious reasons, he shut down the opponents’ top pass-catcher for a majority of the game.

NFL Veteran Evaluation: “Orr has some dog in him. With good technique, he can cover and come up and hit you, too,” McMillian said.

Ethan Eagerton, DB, Empire (AZ): Tall and rangy, the 6-1 and 185-pounder did what was expected of him in man-to-man coverage. When moved to safety at times, he had little, or no problems with making an easy transition.

NFL Veteran Evaluation: “Eagerton is a smart player with ability to play Division I. He fits the mold that colleges look for,” McMillian said.

Manaia Atuaia, LB, Kahuku (HI): Seemingly all eyes were on Hawaii commit Jeremiah Pritchard. Regardless, Atuaia held his own in this environment. The 6-1 and 220-pounder, in fact, is heading down a similar path.

NFL Veteran Evaluation: “With good hips, and movement overall, Atuaia is a playmaker you need at the second level,” Evans said.

Brett Bloodworth, LB, Mansfield Legacy (TX): North Texas or Texas State would be an ideal fit for the talented 6-3 and 210-pounder. If one of those programs does not pull the trigger on an offer soon, another school will do just that.

NFL Veteran Evaluation: “Bloodworth is hard-nosed and physical, also intense, with a great frame for life at the next level,” Evans said.

Alex Hunter, LB, Liberty (AZ): The 6-1 and 230-pounder was a determined individual who created problems for the opposing offensive coordinator. Not surprisingly, teams from the Mountain West Conference have been in contact with him.

NFL Veteran Evaluation: “Hunter was, get this, a hunter out on the field. He showed the ability to play downhill football,” Evans said.

Corey Selenski, LB, JSerra (CA): Several schools are interested in the 6-3 and 220-pounder. Playing in one of the top leagues on the prep circuit, odds are that there will not be a problem adjusting to speed of the game moving forward.

NFL Veteran Evaluation: “Selenski was instinctive and made some big plays for us. He can change the game at any time,” Evans said.

Tiano Tialavea, DL, O’Dea (WA): The 6-4 and 253-pounder was almost unstoppable next to Texas Tech commit Joe Wallace. Tialavea’s name was called more than a few times for being in the backfield to disrupt the offensive flow.

NFL Veteran Evaluation: “Tialavea has good quicks for his size and great upper body strength, I liked what he did,” Martinez said.

Massen Newton, DL, Lakeridge (OR): The 6-1 and 265-pounder caused plenty of havoc along with Purdue commit Lorenzo Neal. Inside, down in the trenches, that’s where Newton feels most at home and that was apparent thoughout.

NFL Veteran Evaluation: “Newton was smart, willing to learn, picked up our concepts and took care of business,” Martinez said.

Harley Hazlett, QB, Abiline (KS): Vanderbilt commit Deuce Wallace was essentially the prospect the public came to see. Hazlett, however, turned out to be a pleasant surprise for fans. The 6-4 and 200-pounder came to play.

NFL Veteran Evaluation: “Hazlett has a live arm. Zone read is in his wheelhouse. He can produce with development,” Banks said.

Triston Fairchild, RB, Papillion La Vista South (NE): The 5-10 and 1905-pounder was one to watch despite presence of Big 10 Conference target James Robinson. Fairchild, in fact, endeared himself to many on his coaching staff.

NFL Veteran Evaluation: “Fairchild, he was one of my favorite players. Only wish we could’ve got him the ball more,” Banks said.

Lawrence Brown, RB, Southside (NC): The 5-9 and 186-pounder could be on the verge of landing a couple of unexpected, yet long overdue, offers. His jack-of-all-trades mentality will be a good fit for a team willing to make the move.

NFL Veteran Evaluation: “Brown showed good vision and agility. He made some guys miss. The potential is there,” Stills said.

David Barnett, WR, Shawnee (OH): With size and deceptive speed, the 6-3 and 192-pounder quickly emerged as one of the more reliable options. Of course, the signal-callers looked in his direction when first down yardage was needed.

NFL Veteran Evaluation: “Barnett was a consistent target for our team. He knew what to do and make good plays on the ball,” Banks said.

Tucker Spears, TE, Avon Old Farms (CT): The 6-5 and 240-pounder was always destined to play on Saturdays and recently comitted to Dartmouth. He caught anything, and everything, located in his general vicinity.

NFL Veteran Evaluation: “Spears impressed me the most out of just about anyone. There’s a lot to like about him,” Banks said.

NFL Veteran Evaluation: “Gambill did well under center. He understood what was expected from him by the coaching staff,” Rivera said.

Rodrick Napper, DB, Beech (TN): One-time Tennessee commit Dorian Banks received most of buzz prior to the game. Nevertheless, Napper left a lasting impression. There was an undeniable buzz surrounding the 5-9 and 172-pounder.

NFL Veteran Evaluation: “Napper is talented, with great potential. His football IQ is off the charts and that helps his stock,” Stills said.

Raye Wilson, DB, Junction City (KS): A true competitor in every sense, the 5-11 and 185-pounder was not shy about wanting to go up against the opponent’s top player. Also worth noting, he won his share of battles during those encounters.

NFL Veteran Evaluation: “Wilson is aggressive, not afraid to mix it up. You like a player like him with good size and speed,” Stills said.

Kody Melugin, DB, El Dorado (KS): Undersized by some standards, the 5-8 and 165-pounder did not let his size, or an often times perceived lack thereof, stop him from making an impact each and every time that he stepped out on the field.

NFL Veteran Evaluation: “Melugin gives good effort, all of the time, too. As coaches, that’s all you can ask of your players,” Stills said.

James Brown, LB, Lafayette (LA): Perhaps no one increased his chances of securing a scholarship offer more than the 6-2 and 225-pounder. He made plays all over the field, and when all was said and done, Brown earned Defensive MVP.

NFL Veteran Evaluation: “Brown is a playmaker, and whenever we called that number of his, he came up with a stop,” Stills said.

Toron Morten, LB, Central (AL): Despite having close to 10 offers on the table prior to kickoff, the 6-1 and 230-pounder played with a hunger unlike most. Tennessee Tech should considered itself lucky to have landed a commitment from him.

NFL Veteran Evaluation: “Morten, he gets it and understands the game. Every team needs someone like him on the roster,” Stills said.

Glennwood Williams, LB, Frederick Douglass (MD): A hybrid, of sorts, the 5-10 and 265-pounder can put his hand in the dirt and rush from outside. Or inside, for that matter. His versatility is something that many schools figure to value.

NFL Veteran Evaluation: “Williams will find a home, that’s somewhere in college. Players like him are hard to find,” McCauley said.

Robert Fish, LB, Warren (OH): The 6-3 and 225-pounder did not get outworked. That rarely, if ever, happens. Another thing he has going for him is, Fish is a more than capable special teams contributor, especially when it comes to punting.

NFL Veteran Evaluation: “A punter with a linebacker’s mentality, or the other way around, what could be better?” McCauley said.

Brian Manuel, DL, St. John’s College (MD): The 6-4 and 309-pounder was an instant favorite of the coaching staff. Rightfully so given his relentless work ethic in practice and that desire translated well to the game in several situations.

NFL Veteran Evaluation: “With his size, and determination, Manuel has a bright future ahead. Keep a close eye on him,” McCauley said.

Claudio Martin, DL, Rockhurst (KS): With Mississippi State commit Emmit Gooden in the mix, the 6-3 and 250-pounder did not get lost in the shuffle. He would not be denied. Suppose that explains interest from the Big 10 Conference.

NFL Veteran Evaluation: “Martin goes about his business quietly. His results are loud though. His play does the talking,” Stills said.