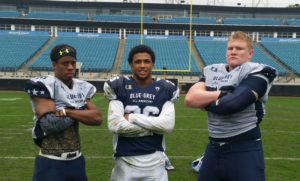 Similar to year’s past, many of the country’s more high-profile prospects were in action at the Blue-Grey All-American Bowl. This time, it was the Class of 2016 version and Grey defeated Blue, 28-14, on Jan. 16 at Jacksonville Jaguars’ EverBank Field.

Notre Dame commits Parker Boudreaux and Troy Pride were the marquee names for the Grey. Pride, in fact, was the Defensive MVP after finishing with two interceptions, including a 58-yarder for a fourth-quarter touchdown and the final margin of victory.

On the other side, for the Blue, Fighting Irish commit Julian Love was a familiar face for Boudreaux and Pride. With a pair of touchdowns, UCLA commit Jalen Starks kept the game close throughout and took home the hardware as the Offensive MVP.

The well-known names lived up to the hype. After all, the scene was set for players to shine and receive added national exposure. They did so on one of the biggest stages around. Now, for most, up next is major college ball in the NCAA Division I ranks.

Once everyone recently arrived in the Sunshine State, the country’s best had an opportunity to work with our staff of NFL veterans, now turned coaches for the Blue-Grey All-American Bowl, including the Grey’s Jeff Kopp, formerly of the hometown Jaguars.

Editors Note: NFL Veteran Evaluations seen below were randomly chosen. Still, each participant in this year’s All-American Bowl received a personal recommendation from the one-time professionals and that info was sent to college coaches all over the country.

Stone Johnson, QB, Winona (TX): With marquee name and ACC target Augie DeBiase injured, the 6-3 and 215-pound made the most of his opportunities.

NFL Veteran Evaluation: “Johnson was a big, strong leader. His arm strength was a plus in the pocket and he threw the ball well while in traffic,” Kopp said.

Chase Smith, RB, Azle (TX): The 5-8 and 175-pounder was a nice change-of-pace back. The Stephen F. Austin commit did rather well in all facets of the game.

NFL Veteran Evaluation: “Smith had quickness and power. An all-around option, we got the job done running, blocking and catching the ball,” Kopp said.

NFL Veteran Evaluation: “Good all-around, quickness helped Hedrick get open in some tight windows. Once there, his hands were sure, as well,” Kopp said.

Austin Duncan, TE, South Gibson County (TN): The 6-2 and 200-pounder opened up plenty of eyes at practice. Little, or nothing, changed during the game.

NFL Veteran Evaluation: “A versatile athlete, we moved Duncan around. He lined up outside, in the slot, just all over. He’s a tough young man,” Kopp said.

John Mays, OL, Ribault (FL): More than just a big body, the 6-7 and 305-pounder showed quite a bit of athleticism. His college stock is certainly on the rise.

NFL Veteran Evaluation: “May is still filling out, and with his technique, also an ability to move people around, he’s a got a good shot in college,” Wunsch said.

Dalton Turnbow, OL, Westview (TN): With an ability to line up at center, the 6-1 and 275-pounder was able to better show some of his overall versatility.

NFL Veteran Evaluation: “Turnbow understood what was expected from him by the coaching staff then went out and did a good job in the game,” Wunsch said.

Michael Stillwell, OL, East Burke (NC): The 6-3 and 275-pounder regularly received rave reviews. Of course, after the game, his name was a hot topic.

NFL Veteran Evaluation: “Speed, strength, and heart, Stillwell was one of my favorites. At center, with development, he can play college ball,” Wunsch said.

NFL Veteran Evaluation: “Goodwin was hard-nosed and has an above average football IQ. Strong and great body control helped his cause,” Kopp said.

Parker Peck, LB, Harrisonville (MO): The 6-4 and 215-pounder flew around the field. Always around the ball, he certainly possesses plenty of upside.

NFL Veteran Evaluation: “Peck had good length and was strong at the point of attack. He played right over the tight end and showed up,” Kopp said.

DeAndre Steelman, LB, Oakleaf (FL): In terms of having his number called, the 5-11 and 210-pounder was as active as they come from start to finish.

NFL Veteran Evaluation: “Steelman flashed on film, before and after the game. Very athletic versatile, great in space, Steelman has a high ceiling,” Kopp said.

Rudolph Singleton, LB, Village Christian Academy (NC): Never one to back down from a challenge, the 6-1 and 205-pounder was up to each and every task.

NFL Veteran Evaluation: Singleton can play multiple positions at the second level, that’s in space and in coverage, There’s a lot to like about him,” Kopp said.

Zuriel Davis, DL, Jackson (FL): After an impressive effort in this environment, the scholarship count continues to climb, and climb, for the 6-4 and 340-pounder.

NFL Veteran Evaluation: “No one could block Davis. He went out and handled his business. Watch, he will play some big-time ball in college soon,” Darby said.

Dallas Hartle, DL, Ledford (NC): The 6-4 and 200-pounder did not take a play off. He gave maximum effort from the opening kickoff till the final whistle.

NFL Veteran Evaluation: “Embry was a steady player for us, a good leader. He responded well to my assistants during practice and the game,” Bell said.

John Larson, QB, Braham (MN): Calm, cool, and collected, the 6-2 and 195-pounder had a good presence in the pocket and also delivered solid results.

NFL Veteran Evaluation: “Larson was a smart player. He understood the game plan we put together for him, then went out and executed things,” Bell said.

Brandon LaMarche, RB, Mater Dei (CA): Schools from the Mountain West Conference have expressed interest in the 5-10 and 190-pounder. We now see why.

NFL Veteran Evaluation: “LaMarche is from a great program with a great coach, that’s Bruce Rollinson. He had no problems fitting in and doing well,” McMillian said.

Devion Clayton, WR, Silverado (NV): The 6-4 and 193-pounder has a big target and had little, or no, problems with catching the ball at its highest point.

NFL Veteran Evaluation: “Clayton was athletic with enough speed to play at the Division I level. He gave the defensive backs many problems,” McMillian said.

Luke Presley, DB, Tolsia (WV): Never one to be underestimated, the 5-9 and 170-pounder was able to make difference throughout and had an interception.

NFL Veteran Evaluation: “Presley had a knack for coming up with key plays. Someone, a college, they need to take a chance on this young man,” McMillian said.

John McKee, DB, Monrovia (CA): The 5-9 and 172-pound was not intimidated and had plenty of help from Utah State commit Braxton Gunther.

NFL Veteran Evaluation: “Top end speed, it’s all about that, and McKee had plenty of it to burn. Plus, he showed me some good technique,” McMillian said.

Jake Krambeck, LB, Gretna (NE): The 6-2 and 210-pound has received varied levels of interest. The school to land a commitment will be lucky, bottom line.

NFL Veteran Evaluation: “Hey, this kid Krambeck, he can play. It’s only a matter of time before these colleges figure it out. He’s on the radar,” McCauley said

Hunter Eborn, LB, Highland (ID): With a handful of programs in the mix, the 6-3 and 225-pounder is on the verge of taking the next step in terms of exposure.

NFL Veteran Evaluation: “Eborn, he was a competitor. Every team needs someone like him, one guy that goes out there and gives it everything,” McCauley said.

Ostell Martin, OL, Cass Technical (MI): There’s a reason why the 6-5 and 329-pounder has frequently been contacted by different teams in the Big 10 Conference.

NFL Veteran Evaluation: “Martin was a big body, and more than that, he moved around really well for his size. We relied on him early and often,” Davis said.

Bryce Brown, OL, North (IN): The 6-2 and 265-pounder ran the show from his spot at center and did nothing to tarnish his growing reputation with colleges.

NFL Veteran Evaluation: “Smart, quick and strong, there’s a lot to like with Brown. He grasped most of our concepts and did his job very well,” Davis said.

Minsok Lee, OL, Westminster Christian Academy (MO): First thing that jumped was his frame. The 6-5 and 315-pounder moved well for his size, regardless.

NFL Veteran Evaluation: “Lee was a big part of our line. We had some talented big men and he fell in to that category, there’s no question about it,” Davis said

Jake Richardson, DL, Minnehaha Academy (MN): With multiple scholarships on the table, the buzz surrounding the 6-3 and 229-pounder has not subsided.

NFL Veteran Evaluation: “Tenacity, excitement, lots of juice, that was Richardson. He was a playmaker, there’s no better way to explain it than that,” Curry said.

Eljon Williams, DL, Randolph (MA): Perhaps no prospect increased his stock more in the eyes of the powers that be than the pass-rushing 6-5 and 250-pounder.

NFL Veteran Evaluation: “Size and tools, Williams had it all. He has that prototypical size for the college game. Plus, he’s a real smart kid,” Curry said.

Kody Palladino, DL, Milford (NH): The 6-2 and 240-pounder had a motor that did not stop. He knew only one gear. That was full-speed. All the time, too.

NFL Veteran Evaluation: “Put him in a manhole, Palladino will find a way out, he is smart and crafty. A leader, he was my starter from the very first day,” Curry said.

Deonta Belser, DL, Elden (OH): Slightly underrated beforehand, the perception figures to change about the 6-5 and 230-pounder after his well-rounded effort.

NFL Veteran Evaluation: “At times, he showed a mean streak, that’s when Belser was at his best. He is a natural and his ability is catching up,” Curry said.