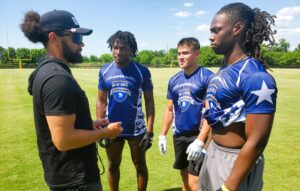 Similar to many times in recent history, NFL veteran trainer Rodney Beasley was the lead instructor during the Blue-Grey All-American Combine (Mid-Atlantic Super) at Washington Commanders’ Training Facility in Richmond (VA). He was joined by several former professionals, as well.

Mason Cain, QB, 2023, West Stokes (NC): The 6-foot and 185-pounder could attract the attention of schools in the Southern Conference. He’s heading in the right direction. Monitor the situation, regardless.

Elijah Farmer, RB, 2023, Clover (SC): Georgia Southern has inquired about the 5-10 and 190-pounder. Others just might follow suit.

Michael Thomas, RB, 2023, Nansemond River (VA): The 5-10 and 205-pounder looks like a possible good fit with a team located in the Colonial Athletic Association, perhaps.

Jordan Tapscott, WR, 2023, Kettle Run (VA): The 6-1 and 176-pounder was on the official roster, but unable to attend the workout. Kent State, Liberty and Towson are interested.

Jason Lindsay, WR, 2023, Baltimore Poly (MD): Delaware State and Elon are on the radar of the 5-10 and 175-pounder. The feeling seems mutual, worth nothing.

Bandon Raysor, WR, 2023, Catawba Ridge (SC): Mercer and Wagner have seen something they like in the 5-10 and 175-pounder. This situation will be interesting.

Zavian Oates, WR, 2023, Eastern Wayne (NC): With a high ceiling, Air Force and Navy have kept the lines of communication open with the 5-9 and 160-pounder.

Christian Lyons, WR, 2023, Thomas Dale (VA): Long and lean, yet quick and fast, the 6-3 and 175-pounder appears destined to play somewhere on Saturdays.

Steven Hamby, OL, 2023, Statesville (NC): Nearly a finished product, the 6-5 and 285-pounder has kept in contact with teams from the American Athletic Conference.

Jason Creech, OL, 2023, South Guilford (NC): Despite a somewhat minor injury, the 6-5 and 260-pounder worked though things and put his best foot forward.

Donte Lipscomb, OL, 2023, Eastern Guilford (NC): Big and strong, with vastly improved athleticism, the 6-4 and 330-pounder was difficult to deal with.

Isreal Terry, DB, 2023, Vance (NC): With ongoing talks with multiple teams in the ACC, among other conferences, the future is bright for the 5-10 and 180-pounder.

Shane Eller, LB, 2023, Reed (VA): The 5-9 and 185-pounder could very well find a future home with a school located somewhere in the Colonial Athletic Association.

Elijah Brooks, DL, 2023, Louisa County (VA): The 6-2 and 280-pounder has communicated with Buffalo and Kent State. Virginia could be a game-changer though.

Damon Bremer, DL, 2023, Union Pines (NC): Each and every time, seemingly without fail, the 6-2 and 225-pounder improves. He’s destined to play on Saturdays.