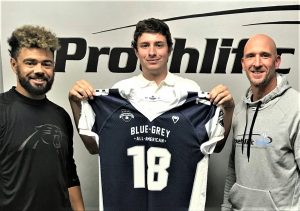 Every year, moreover right around this time, the staff from Blue-Grey Football, with a collection of NFL veterans and administrators, hits the road on the brand’s nationwide Jersey Presentation Tour.

The goal is to promote the All-American Bowl and a select few of the nation’s top prospects in the Class of 2018 are recognized in front of family and friends. The community in general, to that end.

The action from the All-American Bowl will be nationally broadcast on either ESPN3 or Impact Football Network (please check your local listings). Also, similar to year’s past, the footage will be permanently archived.

Brayden Hawkins from Myers Park (NC) recently received an acknowledgement. The 6-foot-3 and 215-pound quarterback was selected to line up for the East vs. West on Jan. 22 at AT&T Stadium.

NFL veteran and Super Bowl Champion Ricky Proehl, along with NFL veteran trainer Rodney Beasley were in attendance. Each came away thoroughly impressed with Hawkins, both on and off the field.

On the radar for a while, he’s equipped with a profile on the 247Sports Composite Rankings, an accurate indicator of talent considering the tool takes into account evaluations of the major recruiting services.

“Hawkins is a kid with advanced mechanics, a big and live arm, also some underrated athleticism. He can make all the throws and does so with a quick release,” said Tom Loy, 247Sports Recruiting Analyst.

Given his success thus far, it should come as no surprise to learn Hawkins has his share of interest from colleges all over the country. One need not look any further than his budding resume for proof.

Schools from the Big South Conference and Southern Conference were presumably among the to first to jump on the bandwagon, with Chattanooga and Virginia Military Institue (VMI) out in front.

Programs from the Mid-American Conference (MAC), Akron being one of the many looming options and most notably Ball State, appeared to have the once-perceived inside track for a commitment.

Teams from the Mountain West Conference also expressed some varied levels of interest in the past, with Nevada and San Jose State emerging as couple of potential destinations in the near future.

Worth mentioning, the Pac-12 Conference could develop in to a possible player for Hawkins. After all, there has been a fair amount of communication with the likes of Cal, Stanford and Washington State.

“Hawkins has a Power 5 conference type of body and the ability, with accuracy. You can see that it’s all there,” said NFL veteran Jerry Wunsch from We Believe In Me, a program Hawkins is involved with.

“What I like about him is, he’s a student of the game and pays attention to the details. Hawkins understands the little nuances, the importance of situations. That will translate at the next level.” he added.

A part-time starter as sophomore, Hawkins flourished in a full-time role as junior. The numbers followed suit and he finished with a 71 completion percentage for 2,782 yards and 33 touchdowns.

As a senior, there has been no drop-off in production. In 10 games so far, with five more possible, Hawkins has a 64 completion percentage for 2,449 yards and 19 touchdowns with six rushing scores.

An NCAA full-qualifer, on track to graduate in December, the future is indeed bright. First things first, however, before soon playing on Saturdays, he’ll be out on the gridiron in the All-American Bowl.