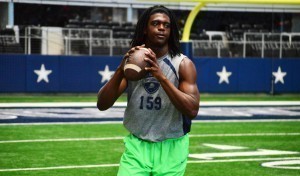 Nebraska commit Terry Wilson was among the nation’s high-profile prospects at the recent Blue-Grey Super Combine inside AT&T Stadium.

There was plenty of hype surrounding this past weekend’s Blue-Grey Super Combine. Rightfully so considering the collection of top-notch talent and the venue was held inside of AT&T Stadium, home of the Dallas Cowboys.

In retrospect, the workout lived up to the advanced billing as NFL veterans Mark McMillian, Tony Banks, Ty Nsekhe and Jerrod Black shared their knowledge of the game and were impressed with many of the individuals in attendance.

Now, it’s time to take a closer look at some of the high-profile prospects who left a lasting impression on the powers that be, as well as many of the under-radar recruits who took the first step toward making a name for themselves.

Terry Wilson, QB, Del City (OK): A Nebraska commit, the 6-foot-3 and 185-pound senior-to-be was on another level in comparison to his peers. The next step could be to accept an invitation to the Blue-Grey All-American Bowl.

Harley Hazlett, QB, Abilene (KS): The 6-4 and 185-pound senior-to-be gets better, and better, with each appearance he makes in front of our staff. Not surprisingly, schools from the Big 12 Conference remain in constant contact.

John Larson, QB, Braham Area (MN): The road trip from up North did not appear to faze the 6-2 and 190-pound senior-to-be. Harry Woodberry from Woodlands (TX) and Stone Johnson from John Tyler (TX) also did particularly well.

Tevin McDaniel, RB, Heritage Hall (OK): The 6-foot and 225-pound senior-to-be received his first offer, from Air Force, this past week. Other programs figure to follow suit, especially once words spreads about his effort here.

Taylor Murph, RB, Ralston (NE): South Dakota State has expressed varied levels of interest in the 5-11 and 175-pound senior-to-be. Problem is, nearby Nebraska is also in the mix. Safe to say, at this stage, he has no shortage of options.

Shannon Warren, RB, Samuel Clemens (TX): The 5-10 and 188-pound senior-to-be did well during skills testing and duplicated the feat once the one-on-ones started. For the record, Missouri has reached out to him in the recent past.

Timothy Fields, RB, Tascosa (TX): The 5-9 and 185-pound senior-to-be ran a 4.38 in the 40-yard dash. LaRon Wallace from Southern Boone (MO), Chase Smith from Azle (TX) and Brayden Hull from Timberland (MO) are names to remember.

Stefan Palmer, WR, Autaugaville (AL): Recruiting is starting to pick up for the 6-foot and 196-pound senior-to-be. Missouri, Mississippi State, and Southern Miss are a few of the schools who have liked what they’ve seen.

DeShun Qualls, WR, Jersey Village (TX): The 5-11 and 162-pound senior-to-be proved capable of catching the ball down the field, on the sideline and over the middle. He caught just about everything thrown toward his direction.

Matt Blaser, WR, Poquoson (VA): Equipped with a knack for making the difficult play appear to be, at times routine, the 6-foot and 183-pound senior-to-be delivered more than a few memorable moments with a wide array of receptions.

Ben Walker, WR, Pusch Ridge (AZ): The 6-4 and 195-pound senior-to-be was a favorite of the signal-callers when the time was right to work down around the red zone. Same thing can be said about Ryan Martinez from Lee’s Summit North (MO).

Tucker Spears, TE, Avon Old Farms (CT): Perhaps no player at his position on the combine circuit has impressed us more than the 6-5 and 230-pound senior-to-be. With three scholarships in place, the list of potential suitors continues to grow.

Madre Harper, DB, Arlington Lamar (TX): An Oklahoma State commit, the 6-3 and 170-pound senior-to-be shutdown one side of the field on several occasions. The Cowboys will be happy once he finally arrives on their college campus.

Charles Oliver, DB, Fairfield (TX): A Texas A&M commit, the 6-2 and 185-pound senior-to-be was on the official roster. However, due to unforeseen circumstances, he was not able to attend. Nevertheless, his name remains on the radar.

Raye Wilson, DB, Junction City (KS): The 5-11 and 185-pound senior-to-be has a motor that does not stop. He knows one gear. And that’s full speed. We would not be the least bit surprised to see him soon land his first major offer.

James Brown, LB, Lafayette (LA): The 6-2 and and 225-pound senior-to-be seems to be coming into his own. No better time than now. Louisiana at Lafayette was the first to jump on the old bandwagon. Northwestern is a player, too.

Brett Bloodworth, LB, Mansfield Legacy (TX): At first, the 6-2 and 205-pound senior-to-be opened up eyes during skills testing. It was more of the same when things got going for the one-on-ones. He had a well-rounded effort, bottom line.

Demerick Gary, DL, Kimball (TX): An SMU commit, the 6-3 and 250-pound senior-to-be most times was seemingly unstoppable off the edge. Try as they might, his counterparts across the line of scrimmage never found an answer for him.

Sam Roberts, DL, Waynesville (MO): The 6-5 and 259-pound senior-to-be certainly passed the eye test. More than a big body, he frequently showed off his athleticism. Anthony Croxton from Tarpon Springs (FL) is from the same mold.

Nate Thompson, OL, Sachse (TX): Truly a man among boys on most occasions, the 6-6 ad 320-pound senior-to-be did not lose many battles down in the trenches. We’d be remiss without talking about his contact with the Sun Belt Conference.

Nate Hanna, OL, Saginaw (TX): The 6-2 and 250-pound senior-to-be took on all-comers. More often than not, let it be known, he came out on the better end of the exchange. Another thing in his favor is the invaluable ability to long-snap.