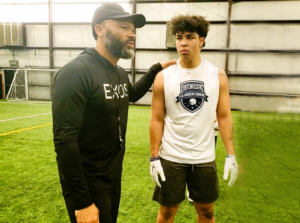 Seemingly without fail, there are a handful of well-known prospects on hand and a few under-the-radar recruits that emerge during the Blue-Grey All-American Combine (Rocky Mountain Regional).

This year was no different from those in the past, as the NFL veteran coaching staff that included Ken Stills, Seneca Wallace and John Holman came away impressed with well-rounded group.

Matt Dean, QB, 2023, Highlands Ranch (CO): No stranger to the setting and back for the second time, the 6-foot-5 and 180-pounder is in contact with Northern Colorado and Wyoming.

Jordan Niesent, RB, 2023, Poudre (CO): On the official roster, the 5-10 and 175-pounder was unavailable. Still, Colorado State and Eastern Washington are interested in him.

Marcus Talbert, RB, 2024, Pomona (CO): Young and largely inexperienced, but only on paper, the ceiling is high for the 5-9 and 170-pounder. He could be the best of this bunch.

Landen Loomis, WR, 2023, Horizon (CO): It would not be a major surprise to see the 5-11 and 170-pounder develop some good relationships with coaches in the Big Sky Conference.

Jesiah Stevens-Silva, TE, 2023, Fountain Ft. Carson (CO): The 6-3 and 218-pounder possesses multiple offers already. Teams in the Mountain West Conference have him on the radar.

Tyler Buckway, OL, 2023, Morgan (UT): A center, the 6-3 and 285-pounder is a target of programs in the Big Sky Conference. Weber State appears to the current leader, too.

Peyton Knoebel, OL, 2024, Ralston Valley (CO): The 6-4 and 265-pounder has been on campus at SMU and TCU. This time next year, watch out, his recruiting could take off.

K.J. Smedley, DB, 2023, Palmer Ridge (CO): On the official roster, but unfortunately not available, the 6-2 and 180-pounder has his set on Colorado and Kansas State.

Kalib Davis, DB, 2023, Cherokee Trail (CO): Tough, a competitor through and through, the 5-10 and 168-pounder has kept the lines of communication open with Wyoming.

Dylan Coyle, LB, 2023, Palmer Ridge (CO): Idaho State and Northern Arizona appear to be potential suitors for the 6-foot and 200-pounder. An offer could materialize soon.

Isaac Engle, LB, 2023, Highlands Ranch (CO): Drake or South Dakota State seem to be logical choices for the 6-1 and 190-pounder. It’ll be interesting to see what the next step is.

Kian Baxley, LB, 2023, University (CO): The 6-2 and 178-pounder turned some heads, so did Brayden Cusick from Dakota Ridge (CO) and Chris Hornung from Columbine (CO).

Devin Furuiye, DL, 2023, Broomfield (CO): The pieces of the puzzle are starting to fall in place for the 6-2 and 250-pounder and Montana could end being a pretty good fit.

Garrett Keeler, DL, 2023, Broomfield (CO): Wyoming has expressed varied levels of interest in the 6-3 and 210-pounder. The situation is worth monitoring, from time to time.

John Hainer, DL, 2023, Granada (CO): Athletic and versatile, capable of playing on both sides of the ball, the 6-4 and 260-pounder could find a comfortable home on defense.

Dominic Butts, DL, 2023, Severance (CO): The 6-4 and 230-pounder showed some flashes of potential down in the trenches. Same with Taylen Robinson from Eaglecrest (CO). 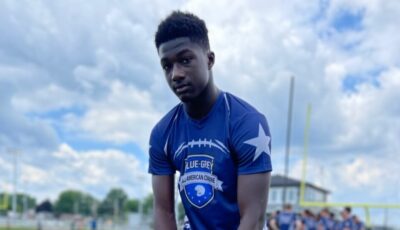