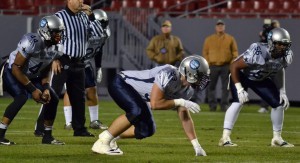 Brandon White (left), Tyler Clark (middle) and Velvario Faulkner (right) helped the South to a 39-14 victory over the North in the Blue-Grey All-American Bowl at Raymond James Stadium.

Make that four straight. Similar to year’s past, the South recently continued its success against the North in the Blue-Grey All-American Bowl with a 39-14 victory at Raymond James Stadium to extend the winning streak to four at the home of the Tampa Bay Buccaneers.

Some of the nation’s premier prospects in the Class of 2015 were in attendance. Most, if not, lived up to the hype. Several under-the-radar recruits also did well and earned a spot in the game after opening up eyes at a Blue-Grey Regional Combine or Super Combine.

NFL veteran Larry Ryans, who once played for the hometown Bucs as well as the Carolina Panthers and Detroit Lions, called the shots as coach for the South. Try as he might, fellow NFL alum Arlen Harris and his staff for the North could never find an answer in this one.

Following the Blue-Grey All-American Bowl, we had a chance to chat with several of the one-time NFL players and learn a bit more about the individuals who participated in the game. Here is a closer look at prospects on the South who left a lasting impression.

Shane Bucenell, QB, Wiregrass Ranch (FL): To his credit, and despite all of the hype surrounding the environment, the 6-foot and 195-pounder wasn’t necessarily overshadowed by peers like Boston College commit Jeff Smith or Lehigh commit Brad Mayes.

NFL Veteran Evaluation: “Bucenell is solid player, and that’s both in and outside the pocket. He does a good job of going through his progressions as well,” Ryans said.

Willie Parker, RB, Carrollwood Day (FL): His days of flying underneath the radar and being a target of only Eastern Michigan are over after the 5-10 and 175-pounder delivered an eye-opening performance on the big stage with a pair of touchdowns.

NFL Veteran Evaluation: “Parker has really good vision, hits the hole hard and can run inside or outside the tackles. One man won’t be able to bring him down,”Ryans said.

Stephen Charron, RB, Palm Harbor (FL): The 6-1 and 230-pounder lined up at fullback on numerous occasions and paved the way for Iowa commit Karan Higdon and his two scores. With the ball in his hands, Charron also made some things happen.

NFL Veteran Evaluation: “Charron didn’t get a chance to shine in our game. Still, he has great balance and hips. Also, speed. He’ll be good at the next level,” Ryans said.

Kelvin McKnight, WR, Bradenton (FL): The 5-8 and 185-pounder nearly stole the show. If not for Parker, Higdon and West Virginia commit Tavares Martin, McKnight would have received the Erik Bell Memorial Award as Offensive Most Valuable Player.

NFL Veteran Evaluation: “McKnight is exceptional in and out of breaks. He’s a baller. A go-to-guy at receiver. A play-maker. There’s a lot to like about him,” Ryans said

Jalen Marsalis, WR, Brentwood (TN): The 6-foot and 170-pounder did well catching the ball in traffic, and when given the opportunity, stretched the field vertically with little or no resistance. He did just about everything the coaching staff asked of him.

Markeyvious Adams, WR, Greenwood (SC): With a handful of scholarship offers already in place, the 6-4 and 190-pounder did nothing to tarnish his growing reputation as one of the top unsigned prospects on the East Coast. He will soon sign with a school.

NFL Veteran Evaluation: “Adams is tall and rangy, with adequate speed. I like his routes. He uses his hands well on the deep ball. He has huge upside,” Ryans said.

Connor Ratcliff, WR, Parkview (MO): The 6-foot and 185-pounder displayed glimpses of his potential at the next level, particularly so in the second quarter when he was on the receiving end of a well-placed 23-yard touchdown pass from Bucenell.

NFL Veteran Evaluation: “Ratcliff has some good size. On the deep ball, he’s very tough to defend, and if it’s close to him, he will make the catch,” Ryans said.

Connor Messer, WR, Raceland (KY): The coaching staff, on both teams for the record, had nothing but good things to say about the work ethic and sticky hands of the 6-4 and 180-pounder. Signs point to him being a productive pass-catcher in college.

NFL Veteran Evaluation: “Messer is tall and will catch anything close. He’s really tough too. With work on his speed, I can see him making a difference,” Ryans said.

Brenden Hadley, WR, Lakewood Ranch (FL): The 6-3 and 190-pounder could have easily been lost in the shuffle with many high-profile counterparts line up at the same spot of the field. Nevertheless, he did a good job of taking advantage of his opportunities.

NFL Veteran Evaluation: “Hadley is big and rangy. He can make the tough catch in the middle and run routes well deep. I think his upside is huge,” Ryans said.

Dominic Cameron, DB, Judson (TX): Questions about him being a true shutdown corner, or not, were quickly answered when 5-11 and 170-pounder held his own against the likes of Arizona commit Darick Holmes Jr. and Delaware commit Vinny Papale.

NFL Veteran Evaluation: “This kid can play. Cameron is comfortable in one-on-one situations and he’s smart overall. He’s not afraid to come up and hit,” Ryans said.

Patrick Sneed, DB, Manor (TX): The 6-foot and 180-pounder takes care of business both on and off the field. Schools interested in landing a commitment are typically are pleasantly surprised to learn he’s a member of the National Honor Society.

Marquavis Gibbs, DB, Suncoast (FL): Florida International (FIU) and Tulane are a few of the schools waiting for a pledge from the 6-1 and 185-pounder, and after seeing him in action again, we would not be surprised to see others jump on the bandwagon.

NFL Veteran Evaluation: “Gibbs is a rangy, long-armed corner with some quick hips and good recovery speed. He has a very impressive set of skills,” Lukas said.

Christoper Moseley, DB, Page (NC): The 5-10 and 170-pounder didn’t back down from any challenge. That is, from start to finish. Often time, in fact, he created situations where the opposing wide receiver or tight end was completely out of their comfort zone.

NFL Veteran Evaluation: “We discovered Moseley at our Regional Combine. He does well in one-on-one situations. He’ll come up and hit you as well,” Ryans said.

David Gardner, DB, Atlantic Coast (FL): Between receiving plenty of reps on offense, and then tending to his responsibilities in the secondary, the 6-2 and 175-pounder was busy from the opening kickoff till the final seconds ticked off the scoreboard clock.

NFL Veteran Evaluation: “I believe Gardner can be a really good at free safety at the next level. He has some good instincts and will lower the boom,” Ryans said.

Donte Abraham, LB, Edgewater (FL): The 6-foot and 190-pounder had a motor that did not ever stop. He knew only one gear, full-speed. That type of determination figures to be one of the many things that has interested Central Florida (UCF) in the recent past.

NFL Veteran Evaluation: “Abraham has sideline-to-sideline range. He’s a good player. He’s another one those that we found from our combine system,” Ryans said.

Velvario Faulkner, LB, St. Thomas Aquinas (FL): Multiple programs from the ACC recently reached out to the 6-foot and 226-pounder. Rightfully so given his well-rounded skill set. Playing on Saturdays is certainly in his future. And sooner rather than later.

NFL Veteran Evaluation: “Faulkner is solid. With range and instincts, we saw it all at the Regional and Super Combines, and then, All-American Bowl,” Ryans said.

Brandon White, LB, Raytown (MO): The 6-foot and 195-pounder teamed with Abraham and Faulkner at the second level and made life difficult for the offensive coordinator. Therefore, White figures to receive some extra looks from colleges after holding his own.

NFL Veteran Evaluation: “White has great energy and is physical at the point of attack. He was my crazy one. Also, and important, he was a leader,” Long said.

Cody Endris, LB, Tampa Catholic (FL): Seemingly always at the right place at the right time, and on several different occasions, the 6-1 and 210-pounder made his mark to those in attendance with a pair of fumble recoveries, one of which was for a touchdown.

NFL Veteran Evaluation: “Endris does just about everything well, you saw that in the game when he made a couple of big plays for our team,” Ryans said.

Carson Pearlman, LB, Evangelical Christian (FL): The 6-2 and 215-pounder plugged up many wholes in the running game and was a disruptive force during the passing game. His effort, naturally, did not go unnoticed by the coaching staff and scouts, alike.

NFL Veteran Evaluation: “Pearlman has good speed, quickness and instincts. He will be a good player once he gets to college. I liked what he did for us,” Ryans said.

Isaiah Frame, DL, Orem (UT): When is comes to passing the eye test, the 6-5 and 270-pounder has no problems doing so. All eyes are usually fixated in his direction. Still, he’s much more than a big body. Causing havoc in the backfield comes quite naturally.

NFL Veteran Evaluation: “This player is a genetic freak. Frame is going to be a very good player in college. With good speed and hips, I liked him,” Ryans said.

Ricky Franklin, DL, Prattville (AL): The 6-1 and 250-pounder saw several double-teams down in the trenches, along the middle of the line of scrimmage. The extra attention, however, did little or nothing to slow him down or stop him from delivering results.

NFL Veteran Evaluation: “The first step of Franklin is excellent. He has excellent hips and hands, too. He’s going to be a great player down the road,” Ryans said.

Tyler Clark, DL, Bloomingdale (FL): Nearby programs Central Florida (UCF) and South Florida (USF) have remained in constant contact with the 6-3 and 235-pounder and it’s more than reasonable to expect that he’ll land a scholarship soon from one or the other.

NFL Veteran Evaluation: “With his high motor, and work on his speed and quickness, Clark will have everything you look for in a player at his spot,” Ryans said.

Desmond Logan, DL, North Mecklenberg (NC): The 6-4 and 218-pounder was a nightmare coming off the edge, and with above average speed, he had his way against the tackles. It’s just a matter of time before someone pulls the trigger on a major offer.

NFL Veteran Evaluation: “Now this kid here, he has a big-time motor. Logan is very aggressive and his technique is good. He needs to continue working,” Ryans said.

Anthony Enriquez, OL, Park Hill (MO): Mild-mannered and unassuming in street clothes, once the 6-4 and 275-pounder turns on the switch, he’s different individual on the gridiron. Lineman on the other side of the ball learned as much quickly in this game.

NFL Veteran Evaluation: “Enriquez has decent size, is aggressive in run-blocking, but needs to clean up on pass-protection. He’s athletic enough to do so,” Coleman said.

Tarron Hampton, OL, Bloomingdale (FL): The 6-6 and 290-pounder possesses plenty of upside and we saw more than a few glimpses of what he can potentially bring to the table. Blocking for the ground game or protecting for the air attack, he got the job done.

NFL Veteran Evaluation: “Hampton is really good player with good size. He will need to work on his quickness but there is some upside with his game,” Coleman said. 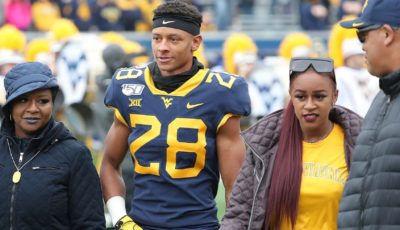 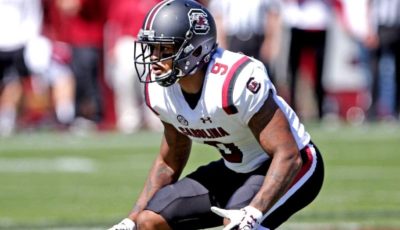 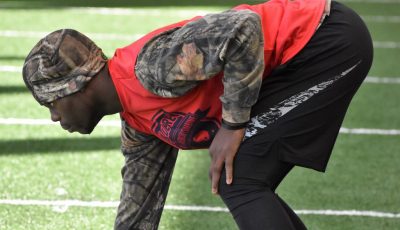