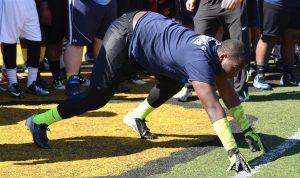 This past week, we revealed an in-depth look at the offenses for the Blue-Grey All-American Bowl at Raymond James Stadium, home of the Tampa Bay Buccaneers. Is a matter of fact, the offense for the North was highlighted a couple of days ago. Now, it’s time to see who is responsible for stopping that unit.

The opening kickoff between the North and South is on Jan. 10 at 8 p.m. (EST) and Fox Sports plans to stream all of the action live (click right here for the link). That said, it’s time to talk a bit more about what appears to be a well-rounded defensive unit for the South and its coach NFL veteran Larry Ryans.

Keith Washington, DB, Prattville (AL): The 6-2 and 180-pounder can do it all. A natural leader, he spent most of his time under center on the prep circuit. However, with offers from programs in the SEC and ACC, among others across the country, he could play on the defensive side of the ball in college.

Dominic Cameron, DB, Judson (TX): The 5-foot-11 and 170-pound New Mexico State commit is as tough as they come and never backs down from a challenge. Handed an assignment, he will complete the task.

Patrick Sneed Jr., DB, Manor (TX): Another well-rounded corner from the Lone Star State, the 6-foot and 180-pounder is known for delivering his share of ball-separating hits from his spot in the secondary.

Christopher Licea, DB, Indian Rocks Christian (FL): The 5-10 and 185-pounder is not afraid to mix it up with bigger and stronger wideouts. Perceived mismatches rarely workout in the other team’s favor.

David Gardner, DB, Atlantic Coast (FL): His frame is what college coaches covet. For as much as he brings to the table on the defensive side of things, the 6-2 and 175-pounder might be better suited on offense.

Stephen Gibbs II, DB, Western (FL): The 5-9 and 185-pounder enjoys contact. Is a matter of fact, the more physical the game, the more productive he becomes. When the going gets tough, he gets going.

Marquavis Gibbs, DB, Suncoast (FL): Another big body type, the 6-1 and 185-pounder typically wins one-on-one battles on the outside. Opponents have a difficult time dealing with his relentless determination.

Christopher Moseley, DB, Page (NC): The 5-10 and 170-pounder understands his role and does a good job of executing the game-plan. His willingness to follow through has caught the attention of scouts.

Stephon Williams, DB, Calvary Christian (FL): Think twice before coming over the middle when the 6-foot and 228-pounder is patrolling things as the essential last line of the defense. Few hit as hard as him.

Bradford Ballash, DB, Seabreeze (FL): The 6-1 and 165-pounder is consistent. Rarely, if ever, is he caught out of position. So, it would not be surprising to see him emerge as favorite of the coaching staff.

Cody Endris, LB, Tampa Catholic (FL): No stranger to difficult competition, the 6-1 and 210-pounder should not have a problem adjusting to the speed of the game. In fact, he might be a step ahead of most.

Donte Abraham, LB, Edgewater (FL): The 6-foot and 190-pounder appears all of the tools necessary to play at the next level. Accordingly, South Florida (USF) and Central Florida (UCF) are recruiting him.

Velvario Faulkner, LB, St. Thomas Aquinas (FL): There’s a reason why more than a few NCAA Division I schools are waiting for a commitment from the 6-foot and 226-pounder. His game is ready for college.

Bruce Holloman, LB, Winter Springs (FL): The 6-2 and 210-pounder is good against the run, and perhaps even better against the pass. Bottom line, it’s extremely difficult to find many flaws in his game.

Carson Pearlman, LB, Evangelical Christian (FL): His energy is contagious. Teammates feed off every move of the 6-2 and 215-pounder. He’s the type of player that makes everyone around him better.

James Barnett, LB, Lakewood (NC): The 5-11 and 215-pounder appears to be most comfortable in the middle of the defense. Still, when moved to the outside, he’s capable of getting the job done.

Brandon White, LB, Raytown (MO): Each and every time we’ve seen the 6-foot and 195-pounder in action he’s left a lasting impression. It’s reasonable to expect more of the same in this setting.

Kyle Cerge-Henderson, DL, Plant (FL): The 6-2 and 260-pound Georgia Tech commit can do it all, stuff running backs and put pressure on the quarterback. He could, in fact, enroll early for the Yellowjackets.

Brentavious Glanton, DL, Monroe (GA): Another pledge for Georgia Tech, the 6-2 and 275-pounder continues to get better and better. Odds are, he does nothing to tarnish his growing reputation.

Marlon Gonzalez, DL, North Fort Myers (FL): The 6-4 and 260-pound South Florida commit had close to double-digit offers before finally deciding that playing for the nearby Bulls was the best possible fit.

Tyler Clark, DL, Bloomingdale (FL): Explosive off the edge, the 6-3 and 235-pounder does plenty of damage in the opponent’s backfield. College scouts from the Southeast have their eyes on him.

Desmond Logan, DL, North Mecklenberg (NC): The 6-4 and 218-pounder has freakish type of athleticism and that makes him difficult to stop off the edge. And once he puts his mind to something, it’s a wrap.

Isaiah Frame, DL, Orem (UT): A man among boys most times on the prep circuit, the 6-5 and 270-pounder will have plenty of competition this time around. Nevertheless, he should experience success.

Ricky Franklin, DL, Prattville (AL): The 6-1 and 250-pounder competes in one of the toughest divisions around. That said, the level of competition this weekend will not come as major surprise to him.

Trevor Keener, DL, Mineda (TX): Taking up space is something that the 6-4 and 265-pounder does well. Though his stats don’t always show up in the box score, his contributions are truly immeasurable.

Ryan Lefevers, DL, Smith-Cotton (MO): The 6-2 and 255-pounder looks like a bodybuilder. Still, the added bulk does not prevent him from being flexible along the interior at his position in the middle.

Spencer Moore, DL, St. Thomas Moore (BC): A native of Canada and a product of Air Raid Academy, the 6-2 and 230-pounder has plenty to prove on American soil. It’s time to silence all of the skeptics.