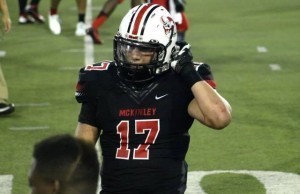 Kent State commit Nick Faulkner will line up for the North on the defensive side of the ball during this weekend’s Blue-Grey All-American Bowl at Raymond James Stadium.

e past couple of days, a detailed look at both offenses has been revealed for this weekend’s Blue-Grey All-American Bowl at Raymond James Stadium, home of the Tampa Bay Buccaneers. However, as the coaches for both teams insist, the outcome could be decided on the other side of the ball.

Kickoff between the North and South is on Jan. 10 at 8 p.m. (EST) and Fox Sports plans to stream all the action live (click right here for the link). That said, we figured it was time to take a closer look at what to expect from the defense in this game and first up is the well-rounded unit for the North.

Nick Faulkner, LB, Canton McKinley (OH): Good against the run and even better in pass coverage, the coaching staff will rely on the 6-foot-2 and 225-pound Kent State commit from start to finish in this one.

Brett Zanotto, LB, Franklin Regional (PA): The 6-foot and 215-pound Maryland commit will command attention at the second level and he’s up for the challenge that comes with the added responsibility.

Malik Thompson, LB, Burke (NE): The 5-10 and 190-pounder is a hybrid, of sorts. He can play backer, of course. If need be, Thompson appears capable of holding his own in the secondary at the safety spot.

Michael Warren, LB, Midlothian (VA): Equipped with a motor that simply does not stop, the 6-1 and 215-pounder rarely, if ever, takes his foot off the gas pedal. In turn, his energy tends to be quite contagious.

Jared Brugmann, LB, Gretna (NE): The 6-2 and 230-pounder is relentless. A tireless worker. When the going gets tough, he gets going. Bottom line, the more physical the play, the better things are his world.

Michael Poulter, LB, Whippany Park (NJ): When it comes to filling the hole at the line of scrimmage, the 6-1 and 236-pounder has no problems with doing so and making life difficult against opposing backs.

Dillon Rork, LB, Grand Iscan Center Catholic (NE): The 6-1 and 200-pounder is about as well-rounded as they come. Still, in the passing game, he excels one-on-one with running backs and tight ends, alike.

Deante Fortenberry, DB, Pittsburg (CA): Known to essentially shutdown one side of the field, the 5-11 and 185-pounder will most likely line up against the other team’s top wide receiver throughout.

Kory Wilson, DB, Liberty (AZ): The 6-1 and 170-pounder has a handful of scholarship offers in place. Rightfully so, given his overall skills. Chances are, he does nothing to tarnish his growing reputation.

JoJo Henderson, DB, Olympus (UT): He comes from good stock considering his father is an NFL veteran. Nevertheless, the younger version has made a name for himself and is heading down a similar path.

Narquise Benton, DB, Desert Vista (AZ): The 5-9 and 160-pounder has all of the tools necessary to compete at the next level. Once his confidence finally catches up to his ability, sky’s the limit for him.

Hunter Young, DB, Bon Homme (SD): The consummate competitor, the 6-foot and 185-pounder never met a challenge he didn’t like. Or accept, for that matter. You always get maximum effort from him.

Sam Westby, DB, Hill Murray (MN): The 5-11 and 175-pounder does not necessarily measure up with prototypical defensive backs. Looks, as they so often say, can be deceiving. He’s living proof of that.

Voshon McCray, DB, Ewing (NJ): Don’t let an often times perceived lack of size fool you, the 5-9 and 185-pounder can hit with the best of them. Expect him to prove the naysayers out there wrong once again.

Brandon Pierce, DB, Aptos (CA): The 6-foot and 187-pounder can play a number of different positions, and regardless of his job or assignment on the field, he delivers results. No task is too tough for him.

Kyle Carroll, DB, Hicksville (NY): Credit is given where it’s due, the 5-10 and 165-poinder has overcome many obstacles, including a bone tumor on his femur that required surgery. His resiliency is admirable.

Fyn Anderson, DL, Lincoln Southeast (NE): The 6-3 and 276-pounder is on a roll when it comes to life on the recruiting circuit. With four scholarships in place, Nebraska could soon jump on the bandwagon.

Brandon Pahl, DL, Warren (OH): They don’t come much bigger and the 6-4 and 295-pounder can fill out a uniform. Make no mistake, aside from his frame, he’s also extremely athletic and a difference-maker.

Shawn Orchard, DL, Dover (PA): The 6-1 and 190-pounder is quick off the ball and could create havoc in the opponent’s backfield.

Tyler Robinson, DL, Teays Valley (OH): Low to the ground and explosive, the 6-1 and 205-pounder uses his size to his advantage.

Jesse Beckwith, DL, Toronte (OH): The 6-4 and 280-pounder is an absolute load to deal with up front on the line of scrimmage.

Matthew Carr, DL, Walton-Verona (KY): A pass-rushing specialist off the edge, the 6-2 and 230-pounder must be accounted for.

Brandon Bly, DL, Waynesfield-Goshen (OH): The 6-3 and 230-pounder is comfortable when matched up one-on-one with tackles.

Daylen Neece, DL, Meigs (OH): Far from a pushover, the 6-4 and 240-pounder makes his presence felt by taking up plenty of space.

Simon Smith, DL, Canton Central Catholic (OH): The 6-2 and 220-pounder is most productive rushing the passer from on the outside.

Tristan Schroeder, DL, Galion (OH): Once he gets going in the right direction, the 6-3 and 250-pounder is a truly disruptive force.

Vince Pospisil, DL, Liberty Center (OH): The 6-2 and 240-pounder likes to mix it up on the inside and he tends to win most exchanges.

Charles Okpala, DL, Roosevelt (CA): Double, and sometimes, triple-teams in the middle are nothing new for the 6-3 and 310-pounder.