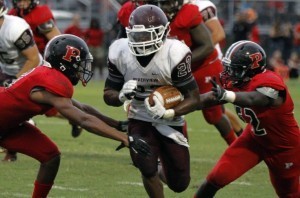 Michigan commit Karan Higdon will be one of many high-profile prospects playing in the Blue-Grey All-American Bowl on Jan. 10 at Raymond James Stadium. (Photo courtesy of prepsheraldtribune.com)

Days from now, on Jan. 10, the Blue-Grey All-American Bowl will take place at Raymond James Stadium, home of the Tampa Bay Buccaneers. And of course, many of the nation’s premier prospects will be in action at the NFL facility.

Opening kickoff between the North and South is at 8 p.m. (EST) and Fox Sports will stream the action live (click right here for the link). In the meantime, this week, expect a plenty of information about the recruits for both of the teams.

After focusing on the offensive side of the ball for the North earlier this week, we’ll now turn our attention toward the South, a group who will be under the guidance of coach and NFL veteran Larry Ryans. Let’s get down to business.

Brad Mayes, QB, Berkeley Prep (FL): The 6-foot-2 and 202-pound Lehigh commit is no slouch. Far from it, in fact. Therefore, it’s more than reasonable to expect him to hold his own, and then some, with his many high-profile peers in attendance. Success here is guaranteed.

Shane Bucenell, QB, Wiregrass Ranch (FL): A late addition to the roster, but more than welcome, the 6-foot and 195-pounder figures to make the most out of his good fortune. Soon in the spotlight, and on one of the biggest stages around, it’s certainly his time to shine.

Karan Higdon, RB, Riverview (FL): Up the middle, or to the outside, the 5-9 and 190-pound Michigan commit is one of those backs that must be accounted for at all times. Opponents who lost track of him in the not so distant past have paid the ultimate price for the mistake.

Willie Parker, RB, Carrollwood Day (FL): Eastern Michigan is out in front for a commitment for the 5-10 and 175-pounder. Chances are, with another one of his patented eye-opening efforts, college from all over the country will then consider jumping on his bandwagon.

Jeff Smith, WR, Clearwater Central Catholic (FL): Accurate on the deep ball and with a soft touch when it comes to underneath patterns, the 6-1 and 170-pound Boston College commit makes all the throws. No question, he can spin it. Still, at the next level, and beyond, he could line up out wide.

Stephen Charron, RB, Palm Harbor (FL): The 6-1 and 230-pounder is essentially a featured type of runner in a fullback’s body. Once he gets going in the right direction and the ball is in his hands, Charron is difficult to stop. It takes more than one player to tackle him.

Sam Vrinios, RB, Merritt Island (FL): An all-purpose threat, the 5-10 and 170-pounder often provides a nice change of pace. Quick as they come, and once in some open space, not many are going to chase him down from behind. He’s what they call a homerun hitter.

T.J. Simmons, RB, Lakeland Christian (FL): The 5-11 and 195-pound UCLA commit has recently battled troublesome ankle injuries and is on the mend. While Simmons would like to play, his heath is a concern. Not only to him, also the coaching staff of the Bruins.

Mon Denson, RB, Lagrange (GA): Don’t let the frame fool you, the 6-foot and 214-pound South Carolina commit is as nimble as they come. Especially for his size. Still, if a first down is needed on a short-yardage play, his number will be called without hesitation.

Tavares Martin, WR, Dwyer (FL): The 6-1 and 170-pound West Virginia commit is one of the more well-known names not only in this game, but on the whole national level. It’s safe to say, there will plenty of eyes on him before, during, and after, the action take places.

Jalen Marsalis, WR, Brentwood (TN): Life on the whole recruiting trail has picked up for the 6-foot and 170-pounder over the course of the past months, or so. Northern Arizona and Illinois State could be a pair of potential final destinations for him at the next level.

Kelvin McKnight, WR, Bradenton (FL): The 5-8 and 185-pounder is often times perceived as somewhat undersized. Still, he plays bigger than his listed height and weight. Underestimating him is not the best idea because McKnight typically proves the naysayers wrong.

Markeyvious Adams, WR, Greenwood (SC): In terms of the country’s top unsigned recruits in this game at his position, the 6-4 and 185-pounder is seemingly in a class all his own. He has close to double-digit offers and a commitment from him could be on the horizon.

Connor Ratcliff, WR, Parkview (MO): The 6-foot and 185-pounder is a possession type of pass-catcher who makes the tough catch over the middle look routine, that is, more often than not. Still, when given the opportunity to stretch the field, he gets the job done.

Brenden Hadley, WR, Lakewood Ranch (FL): Never one to back down from a challenge, the 6-3 and 190-pounder figures to put his best foot forward on the outside, regardless of the individual lined up across from him. Putting forth maximum effort is not a problem.

Connor Messer, WR, Raceland (KY): The 6-4 and 180-pounder catches anything, and everything, that’s thrown in his general direction, particularly in the red zone. Given his playmaking ability, it’s reasonable to expect him to become a favorite of the signal-callers.

Clarke Miller, TE, Plant (FL): A reliable option in the passing game, the 6-3 and 215-pounder possesses soft hands and has displayed good footwork each and every time he’s been in our presence. Equally important, he does an above-average job in pass-protection.

Mason McLean, K, Lincoln (AL): His position is not normally given much recognition unless there is a game-winning kick is on the line. The 6-foot and 200-pounder is cut from a different cloth though and is one of the nation’s premier prospects on special teams.

Tarron Hampton, OL, Bloomingdale (FL): Most times, a man among boys, the 6-6 and 290-pounder looks the part and plays the part.

William Harry Coffin-Schiavon, OL, Lake Region (FL): A technician, the 6-foot and 240-pounder is always aware of his surroundings.

Kelvyn Martin, OL, Cactus (AZ):  The 6-3 and 290-pounder is comfortable with the added responsibility of his spot on the field.

Hunter Rodriguez, OL, Goliad (TX): Eager to learn, the 6-2 and 275-pounder has no problems carrying out the plan of attack.

Bryce Benjamin, OL, Berkeley Prep (FL): The 6-2 and 270-pounder uses his feet well and is rarely, if ever, caught out of position.

Cody Cox, OL, Freedom (FL): Once the 6-4 and 265-pounder turns on the switch, his energy tends to be contagious with teammates.

Jake Ellis, OL, Indian Rocks Christian (FL): Equipped with a motor, the 6-3 and 290-pounder only knows one gear and that’s full-speed.

Anthony Enriquez, OL, Park Hill (MO): The 6-4 and 275-pounder is not a vocal leader. His play, however, speaks volumes about him.